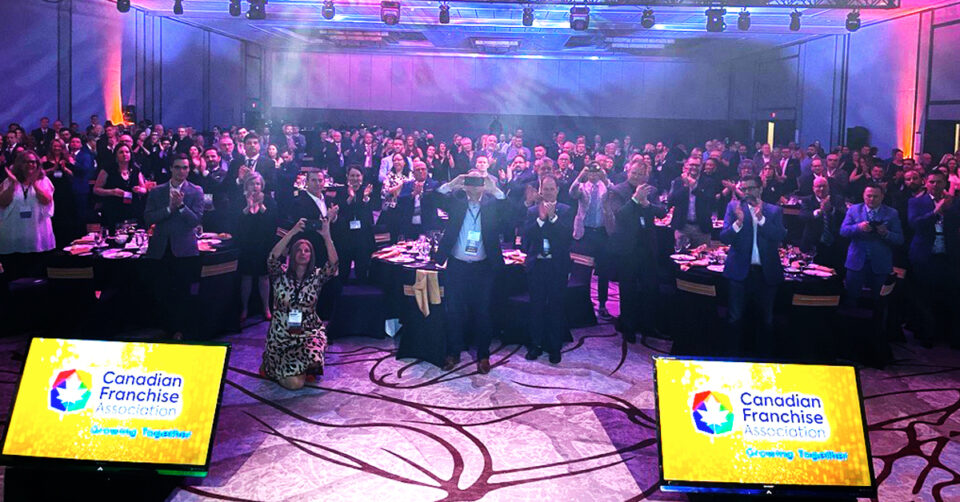 In April, the Canadian Franchise Association (CFA) handed out its annual Awards of Excellence at its National Convention in Ottawa, Ontario. It was the first year the Awards Gala had happened in person since 2019, so it was an especially memorable evening for everyone there. But it was even more memorable for Inspiration Learning Center and EverLine Coatings and Services, who took home the two Grand Prize awards.

The two honours are considered the pinnacle of franchise achievement in Canada, so Franchise Canada decided to uncover the secrets behind these successful brands. Why do they resonate so strongly with their franchisees?  Here’s what the franchisors and franchisees told us about building and growing a top franchise operation.

Winning awards is nothing new for Inspiration Learning Center. Every year since 2018, the tutoring and private school franchise has won at least a silver award at the CFA Awards of Excellence, including the Grand Prize in 2019. It’s an impressive track record, and for franchisee Cecilia Chen, a big reason for that success is that the Inspiration concept is unlike anything out there.

“Our teaching methodology is east meets west,” says Chen, who has Inspiration locations in Aurora and Thornhill, Ontario. “In the east, it’s cognitive application, more practice, repeating things. In the west, it’s more critical thinking, group discussion. That combination is unique, and it helps us strengthen the individual learning styles of each student.”

It also helps that the concept isn’t just about formal tutoring, adds Chen. Yes, instruction is available for almost every subject and grade, but over the years, a variety of other income streams have become available for franchisees, including school application services, educational planning, books for sale, and even the option to establish private high schools.

That diversity of offerings has been a cornerstone of the franchise since Angel Kuang started it back in 2003. The young educator had immigrated from China two years earlier and quickly earned a master’s degree in economics from Lakehead University. Beginning with an Inspiration location of her own in Scarborough, Ontario, Kuang wanted to expand. “I’ve been a businessperson since I was 20, so I’ve always had this business mind,” she says. “And when you have a business, you want it to grow. It’s like raising a child; I’m not satisfied if that child isn’t progressing.”

Today, there are 13 Inspiration Learning Centers spread across the Greater Toronto Area and British Columbia. Kuang wants to continue growing the franchise, and she’s looking for franchisees who aren’t just college educated, but who also show genuine, in-depth interest in the concept. They also need to love socializing, she adds, because talking to parents, tutors, and students is key to understanding what each student needs.

The benefits for franchisees are many, says Chen. “One, we have flexible working hours, which is important for young entrepreneurs like myself looking to balance a career with a personal life and family commitments. I also get a better understanding of the Canadian education system, which allows me to better educate my own kids. And then there’s plenty of support from head office whenever there are challenges, including from Angel herself.”

Most of those challenges came during Chen’s first six months in business, when she was spending six to seven days a week understanding the business, marketing it, and building a strong customer base. It wasn’t easy with a young family at home, but as she found, “you get out of the business what you put into it.”

As for the future of Inspiration Learning Center as a whole, Kuang remains committed to raising it like a child. Since its beginnings, the franchise has found success in larger urban centres, and particularly with newcomers to Canada. But Kuang wants to expand to other cities and appeal to a larger demographic. It won’t be easy, but as she likes to tell franchisees, “No pain, no gain.”

In October 2011, a 23-year-old John Evans attended a franchise tradeshow in Calgary, Alberta, where he met representatives from a company licensing a road surface marking technology. He didn’t know they were licensing it, instead thinking they were selling franchise locations and that it would be a good fit for him as a former College Pro Painters franchisee. What a fortunate misunderstanding that was.

Fast forward 11 years and Evans has turned that licensing partnership into EverLine Coatings and Services, one of the most successful pavement maintenance and line striping franchises in the country. The franchise now has 19 locations across Canada. In the spring, the company entered the U.S., where it opened another 40 locations.

A big reason for that success has been the company’s decision to expand its services, says Evans. “When we started franchising in 2017, we found that line painting was a good business model for a bigger city, but for this to truly be national, it has to fit any shape and size of market. And so that’s where we had to diversify our services.”

Sudbury-based franchisee Eric Lavergne-Giroux was the first to provide these different services. “The big potential for franchisees is that ability to offer multiple services,” he says. “Now, you can take on larger, all-encompassing pavement maintenance programs. You can take a small $500 client who you were just restriping lines for and build that relationship into one worth thousands of dollars every year.”

Another huge benefit with EverLine is its franchisee support system, says Lavergne-Giroux. As a former franchisee himself, Evans knows that all-encompassing supports are key to a thriving franchise. So, he spent significant time and energy helping to build a 12-week online and in-person franchisee training program, as well as providing ongoing supports that include podcasts, videos, bi-weekly roundtables, monthly one-on-one meetings, and the Entrepreneurial Operating System that helps franchisees meet their goals.

That’s been true for Lavergne-Giroux, who says that while the seasonality of the business can sometimes be a challenge, the increased offering of year-round services has definitely helped him scale. “It’s nice to see that growth in my business and EverLine, and that my desire to be involved more or less from day one is paying off.”

It should continue to pay off, says Evans, who notes that the company is attracting more national accounts every year. In the summer, for instance, EverLine was awarded the contract to service all Tim Hortons locations across Canada. To manage that growth, though, the company is looking for more franchisees, particularly in bigger centres like Toronto and Vancouver.

“We’re seeing supersonic velocity as a brand,” says Evans. “We’re staking a claim and innovating, and this is forcing the whole industry to become better, to keep up with us.”

Q: When is the right time to expand my franchise?