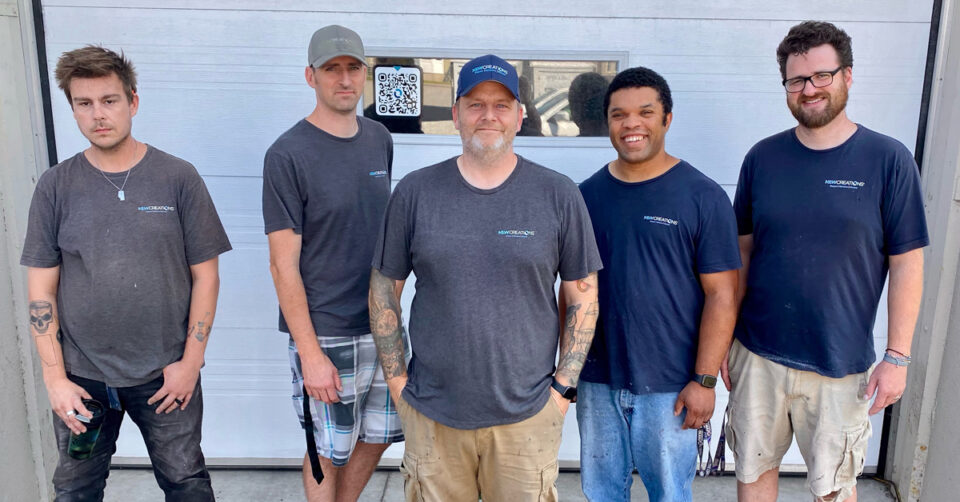 In his 20 years providing specialized restorations with New Creations, Darren Clark has seen his share of everyday repairs, from cigarette burns in the family couch, to fixing the linoleum tear in the floor of an RV. But he also likes the “wow factor” and creative challenge of the unusual repairs that cross his path regularly enough to keep life interesting. Like the Goofy statue.

“It’s probably one of the more unique things I’ve done recently, to restore a Disney statue of Goofy. You couldn’t get one in Canada and there would be $600 replacement cost if you could even find one! So, we restored the statue. It was unique and strange and an example of how you don’t know what you’re going to get!” says Clark, owner of three New Creations franchise territories in Saint John, Fredericton, and Moncton, New Brunswick, that he operates under one business umbrella.

While New Creations started in Portland, Oregon in 1988, the business moved to Canada when founder Larry Stevenson returned home. Franchising started in 1995 and today the company boasts more than 55 franchise locations across the country.

Clark joined New Creations in 2002 as an employee, working in various locations from B.C. to Calgary, before moving home to purchase the Saint John territory in 2013. He’s since built a solid business that has exceeded his expectations and even grew almost 200 per cent during the pandemic. While he started out handling repairs and managing the business himself, he now has three technicians and two office staff members.

His markets have also expanded. Clark started out doing mostly furniture and automotive servicing, but now works in many other niches, from vinyl siding and windows to hardwood floors. He’s also grown his corporate clientele to the point that many businesses call him directly for repairs, from real estate corporations to used car dealerships and moving companies. In the beginning, he made it his mission to start building these connections, making a lot of cold sales calls and networking in the community.

“It was scary at first. But then you quickly realize that you’re a benefit to them, which makes the sales kind of easy, because you’re selling something that can help them make more money or get them out of a jam,” he says.

He immediately outsourced the bookkeeping, but handled most of the other paperwork and business operations. Today, word of mouth is his primary way of getting business, as his services are so custom that it’s hard to advertise. Repairs happen year-round, although there is an uptick in calls about boats and RVs in the summer, and furniture in the fall (when people are home again to notice flaws in their belongings).

Thinking back to his own start with the business, Clark says he was attracted to the creativity the job brings. While he graduated with an arts degree, he also didn’t mind working with his hands. “You get to restore all kinds of things, and it’s a skilled trade that you can’t learn in college,” he says.

While his ideal employee wouldn’t need to have training, he says he does look for that creativity in others, someone with an artistic side or even musical talents. “A stubborn person who sticks with a problem tends to be better than the person who’s not a problem solver,” he says. “I generally look for someone who has a mind that thinks creatively outside of the normal parameters, because that’s what we’re asked to do very frequently. Doing the impossible is what I look for mostly.”

That’s because so many of the repairs they come across are unique. For example, when trying to figure out how to fix a leather car seat, there are traditional tools of the trade, but most repairs don’t go exactly according to plan when you consider the spectrum of furniture finishes and paints. “Artisan is a word you might use, or copycat artistry,” says Clark. The only definite criteria are that staff can’t be colour blind since colour matching is such an important part of the job, and generally they need to know how to drive a stick-shift for some of the custom automotive work.

Clark’s typical day has changed over the years, as he started handing over responsibilities to his employees. When he hired his first employee, he passed along all his clients and focused on growing the business in other sectors like furniture. Because his focus is on specialized repairs, Clark now gets referrals from upholsterers (which he doesn’t do unless it’s specialized) and refers the basic work to them.

In terms of hours, Clark generally works 8:00 a.m. to 5:00 p.m. on weekdays and gives his staff the same schedule. He takes all weekends off, which he considers another perk of franchising, as it gives him time to see his children. “You want to have a good income, but if you’re just always working all the time, what’s the point?” he says. His management style focuses on empowering his employees and he often hands over entire divisions or territories to their care; for example, his first employee now oversees all of the business’s automotive repair.

While the job is not sitting at a desk, it’s not as physical as people might think either, since restoration involves mostly working with your hands rather than heavy lifting. “It’s not physically intensive, but it is a physical job if you walk around, and you go upstairs and go into apartments,” he explains.

In terms of challenges, the most common are complex jobs that don’t go as planned, in which case he just returns to fix the work, which solidifies his reputation. Clark admits he was nervous early in the pandemic, and did lay off one employee for about a month, but then hired him back immediately as the pandemic home repair craze started.

Clark likes being a franchisee because of the independence, but also the community of fellow franchisees, which is particularly helpful when there’s a challenging repair. “You can call anybody in the company, and they’ll help you if you have questions or with whatever you need. I find that really helpful, just the way that we function together.”

He appreciates that the franchisor provides training seminars every February to network and share new products. In terms of potential franchisees, Clark says that people who can trust their own skills and have faith in the franchise process do best. And as for repairs that he’ll take on himself, Clark is always looking out for his next Goofy.