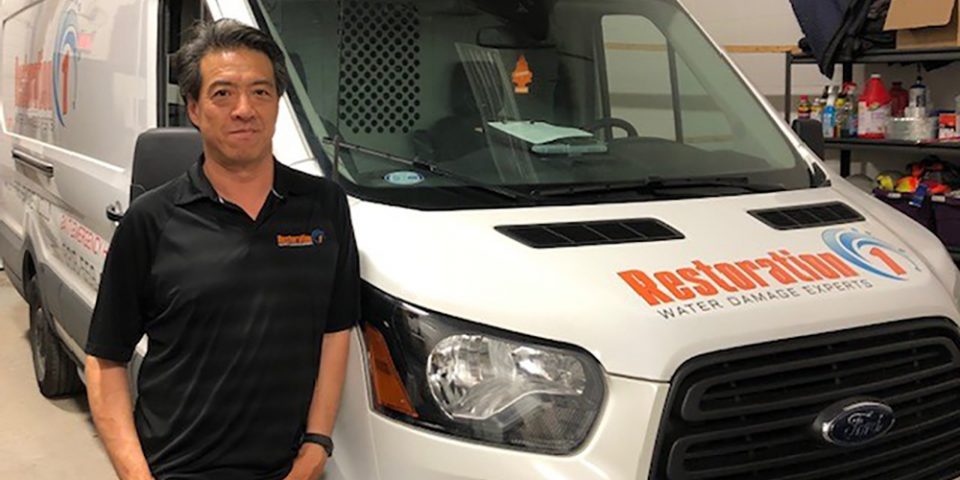 When disaster strikes – whether it be flooding, fire, or mould – property owners in Calgary, Alberta have Restoration 1 franchisee David Ma to call upon to take care of the situation. Restoration 1 is a remediation and restoration service that sends employees to assess damage and restore the property to its original, or better, condition.

Ma came to franchising after 32 years in the oil and gas industry. Following the industry’s recent decline, he felt like it was time to try something different. “I experienced a lot of ups and downs within that industry,” he explains. “I wanted something more recession-proof than what I was working in, something that people were still going to have to spend money on no matter what the economy was like, but I didn’t really know what I was looking for.”

There happened to be a franchise show on in Calgary while he was conducting his search, so he stopped by to check out some options. He spoke to a Restoration 1 representative, who explained that the restoration industry went far beyond just dealing with the aftermath of major floods. “I learned that there are all kinds of ways that people can get water damage in their homes like appliances mishaps, and overflowing sinks; I had no idea how big industry this industry was,” he recalls.

After the show, Ma did some research on his own. “I discovered that this is quite a large industry in terms of insurance claims, and I decided that there was a market for this,” he says. He also researched his local competition in Calgary before deciding to invest, and observed that the market was large enough for another restoration business to thrive. So he signed the franchise agreement and opened up his very own location in November of 2017.

Supported from the start

Ma gives his first year in business a glowing review. “The first year certainly exceeded my expectations: I had a business plan at the beginning, and I had some projections, and I exceeded all of those,” he says. The first few months went much more smoothly than he had expected, which was in part due to his previous management experience, but also because he had the franchisor to rely on.

“We were able to figure out some solutions on our own, but support was always there,” says Ma. “When it came to the point when we didn’t know what to do next, we always had somebody a phone call away to give us answers.” This invaluable support from head office included everything from help with operations to administration to marketing.

As for the Restoration 1 franchise itself, Ma says that having an established system was key for someone like himself, who came from a totally different industry. “When it comes down to it, all businesses are about the system that they use, so having an established and proven system to start off with helps you go into any situation with confidence,” he says.

After coming on board as a Restoration 1 franchisee, Ma went through the initial training program, which he says was an excellent preparation for the year ahead. “They put me through all the different scenarios, with as much hands-on training as possible, and of course some administrative training and dealing with insurance companies and types of customers, etc.” The franchisor also provides ongoing training and updates as they arise, whether it’s by video conference or during the annual meetings.

In addition to training from the franchisor, Ma pursued certifications for the services he provides, following the formal procedures that are set out by the IICRC (Institute of Inspection, Cleaning and Restoration Certification). To stay current, he gets updates through his membership with the IICRC and he reads to keep up with the latest technologies, methodologies, and equipment. “It’s part of business to keep up on the industry,” he explains.

With all this training and certification, Ma says that a background in restoration isn’t strictly necessary. Ma gained business and management experience from running a small consulting company; however, he didn’t have any background in restoration itself before signing on. He says having that management experience was very helpful, but that business knowledge is one area that franchisees can learn about as they grow.

According to Ma, the biggest challenge with getting started is all the uncertainty that comes with running a new business. “You can have all the numbers from the franchisor about how everyone else has been doing, but with a new location and not having been in the business before, there are a lot of questions.”

Then there are the challenges that come with starting up your own business. “You can expect to work a lot of hours to get things established, and to get the personnel and staff trained to work in the way that you expect them to work, all that takes some time to get established,” describes Ma.

Without a solid idea of how the first year is going to go, it also makes it challenging to know how many staff to hire. “You have to be fairly careful on how you’re hiring and how many people you take on,” he adds.

Ma says the best way to handle this uncertainty is to maintain realistic expectations and plan using your current business as a guide. “After the year is gone, you can see where you need to tighten up, or what’s working well for you and you need to carry on,” he says.

Ma’s advice for new franchisees is simple: “Have some short- and long-term plans and then just be patient.” Since about half of the work that comes in is weather related, the volume of work can be unpredictable. Therefore, Ma recommends that franchisees complement their plans with a hearty side of flexibility. Ma recalls that during the first year there were times when there were no calls, and then all of a sudden, there would be a deluge of calls and he’d find himself wishing he had more people or work was spread out a little more.

He advises that when the work piles up, franchisees shouldn’t take on more than they can handle. “If you can’t handle it, you’ll end up providing poor service, and that’s worse than them calling someone else,” he cautions. During the quiet times, Ma suggests spending the time to focus on marketing the business. He also points out that while the industry does have its busy times and lulls, they don’t often last more than a few months each.

Overall, Ma says that one of the biggest benefits of owning his franchise has been the ability to run the business the way he wants. “As an employee, you’ll see things in your workplace that you really could improve on but might not necessarily get accepted,” says Ma. “[As a franchisee], if you see something you want to implement, you can just go ahead; in the end it’s your decision that matters – I think that’s one of the benefits of being a business owner.”