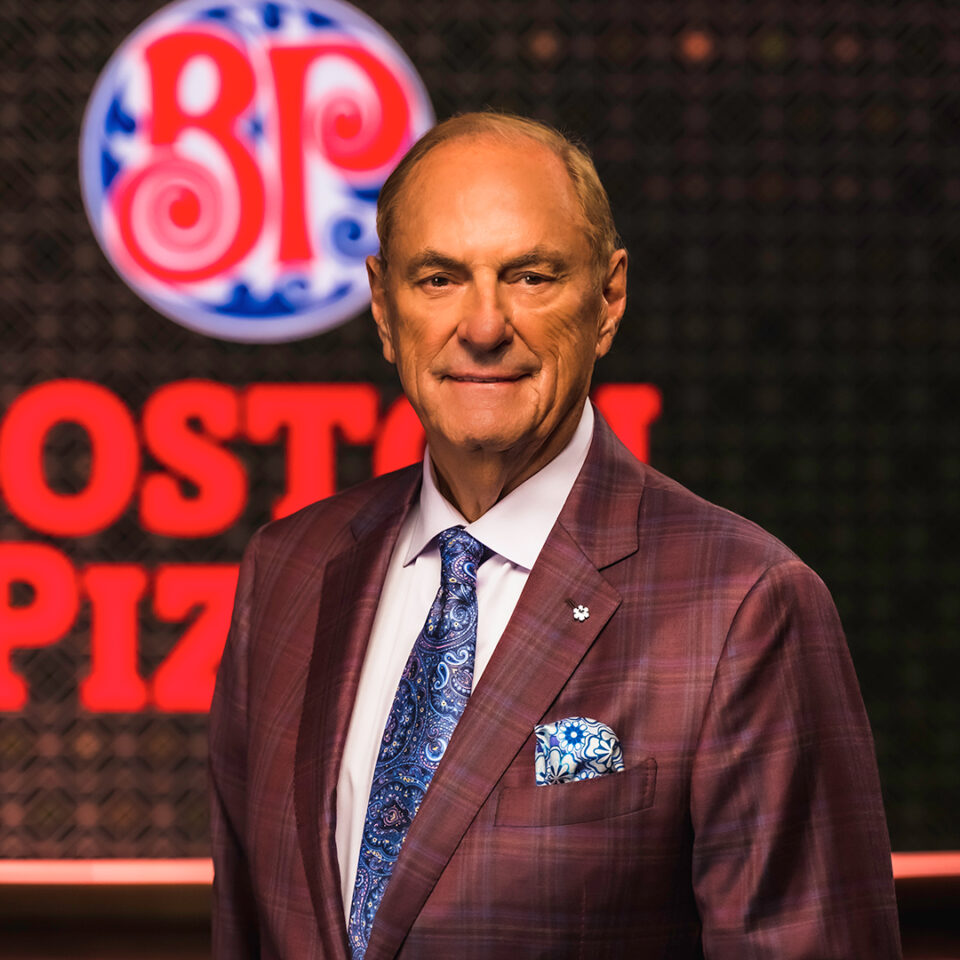 Canadian businessman Jim Treliving’s franchise journey began in 1968 with $5,000 in hand and big aspirations as a new entrepreneur. That hard-earned cash was used to split the cost of a new restaurant business with his then business partner, Don Spence. Together, the pair became the first franchisees of a new pizza restaurant that was taking their small community in Penticton, B.C. by storm. And so was born the Boston Pizza story.

Two months later, Treliving and Spence were sitting in the basement of a furniture store below their restaurant that they used as overflow for seating on weekend nights. But without a liquor license for the basement, their overflow plan was a bust. Easy fix—they applied for one, and before they knew it, they had opened the first Okanagan night club.

“We did [about] $52,000 in the pizza business for a year after we opened. In the nightclub, we did about $180,000 and that got us through. We built a second [nightclub] when we opened [another] Boston Pizza, in a basement again,” explains Treliving on an episode of the Franchise Canada Chats podcast. “Then we realized we were only going to have two of these, it was so much work … The [second] store was in Prince George, B.C. where I had been stationed as a Royal Canadian Mounted Policeman, and it took off. It was so busy; we could hardly keep up.”

The rest is history

Boston Pizza was established in Edmonton, Alberta in 1964 by founder and Greek immigrant, Gus Agioritis. By 1983, Treliving and his former accountant and now business partner, George Melville, had opened 16 franchises of their own around B.C., becoming the brand’s biggest franchisees.

“We got to open these stores and do really well. As we built them, we started coming closer to the lower mainland [in areas] like Chilliwack and Abbotsford, B.C.,” says Treliving.

In 1983, then-owner Ron Coyle planned to sell the Boston Pizza business, and shared the news to Treliving while they were driving to the airport one day. “He said, ‘I’m going to sell the company. Why don’t you guys buy it?’ And I said, ‘sure, let’s do it.’ By the time we got to the hotel from the airport, we had agreed to buy the company. We didn’t have a number yet, just a rough idea, but weren’t happy with it and would negotiate,” notes Treliving.

The brand had 32 franchises at the time, located throughout Edmonton, Winnipeg, Thunder Bay, Alberta, and B.C. Together, Treliving and Melville negotiated the total price of the franchise system for about $3 million that would be paid over time at a 10 per cent interest rate, explains Treliving. Jim and George together put in 50 per cent of the total price with financial support from a lender, and close friend of Treliving’s, who contributed the other 50 per cent. Treliving repaid his friend as he could, and they were off to a lucrative start.

Then Treliving and Melville decided to sell the 15 stores they owned so Treliving could focus solely on being a strong franchisor. They offered the restaurants to existing store managers, who borrowed some money and brought in a business partner.

Under Treliving’s leadership the brand experienced huge growth, and today there are more than 380 Boston Pizza locations in Canada, with additional franchises in the U.S. and Mexico.

Along the way, the concept expanded as well. Boston Pizza’s original menu was pizza and pasta, notes Treliving. “Spaghetti and meatballs, ravioli and meatballs, and lasagna.” Quite the stretch from today’s offerings of more 100 menu items that range from apps and shareables, sandwiches, bowls and salads, desserts, and of course, a wide range of unique pizza and pasta dishes.

“When we got to 14 or 15 locations, we just knew that this was going to grow like crazy. We were going into places that no one else was going to in Ontario, they were staying around the main area doing very well. But we went in small areas and grew … We were the major restaurant in those towns or cities,” says Treliving.

In addition to his franchisor success, Treliving spent 15 seasons on CBC’s Dragons’ Den as an investor who helped Canadian entrepreneurs by using own his own wisdom and capital to kick start their businesses. In 2021, having just turned 80 years old, he decided to step down as a Dragon to focus more on his role as owner and Chairman of Boston Pizza.

So, while choosing new franchisees to invest in the pizza brand is one part of his busy life, hearing pitches from budding entrepreneurs was another decade and a half long adventure.

When it came to knowing if a company had a solid business plan that made him want to invest in them while on the show, Treliving trusted his intuition: “How does this person react when you ask them the questions?”

He adds, “[There was] a local [business] from the Lower Mainland. They came onto the show with one truck, that they brought up to the 10th floor where we shoot Dragons’ Den. [It was a] black and red vehicle called velofix. They pitched this [business of a] truck that comes to your house and fixes your bicycles. I looked at the guys and talked to them and they were genuine in my mind. I was going with my gut. Today, they’ve got close to 200 trucks, they’re all throughout the U.S. What they wanted was a franchise [expert] that had done this before, and that’s why they picked me.”

With nearly 50 years’ experience as a franchisor, and more as a franchisee and entrepreneur, Treliving has gathered a wealth of knowledge to share with business owners of big and small brands.

He emphasizes the importance of establishing strong systems for franchise partners and making sure they stick to them. “[We put] the systems in place, then we hired great people to run those systems. You can’t run it by yourself,” notes Treliving. “A lot of people, especially entrepreneurs, decide they can do everything. We had a head of marketing, operations, and HR. You have to have all those things in place. Then [after] you put those heads in, they must hire underneath them. We had four salesmen working out of Toronto for the eastern part of Canada. Their whole sole purpose was to sell franchises.”

He adds that he and his partner Melville knew from day one that they each had separate jobs to make the business run smoothly and efficiently. And with expansion down south in the U.S. and Mexico, they also made sure to have infrastructure set up with full management teams, separate from the offices in Canada. “We have an office and president there in both countries … If you don’t put the infrastructure together, it’ll collapse on you.”

Most importantly, Treliving says that his biggest advantage as a franchisor is, “the talent [that] comes from the people you hire. I’ve heard people say to me many times, ‘you have a great structure with your people. They seem to love working there and doing the things they want to do.’ But it’s exciting because I don’t put hands on everything or question anything.”

He adds, “You have to trust the people you hire. You can’t step into their booths, you can only ask them questions. To me, that’s part of the infrastructure that we have to do. I ask questions to our management team all the time, but I trust them … You’ve got to put the people in place that you know can do really well. And look after them. They become your family.”

As a welcoming and friendly casual restaurant for guests of all ages, the Boston Pizza brand has always had a special tie to family relationships. And that shines true in the way Treliving talks about his many franchisees spread wide and far.

“We refer to it a lot as family. I can’t think of one franchisee across the country I wouldn’t stop in to see if I were in their area, that they wouldn’t say, ‘let’s go for a drink or come to the house.’ That’s how we operate,” explains Treliving.

When it comes to selecting new franchisees to join the Boston Pizza franchise, he adds, “I think you can look at somebody and how they talk to you, respond, and come across to you if you’re meeting them for the first time. How are they going to react to something in the business down the road? How do they treat people? I treat them as if they’re my partner, I don’t treat them as an employee. I want to work with these people, and they want to work with me. Do they look me in the eye and give me a straight answer? That’s what I look at.”

In 2022, the Canadian Franchise Association (CFA) celebrates a 30-year membership milestone with the Boston Pizza brand. As an Association built on advocating and supporting the franchise business model, this relationship makes a vital impact in providing education, lead generation, advocacy, and much more.

He adds, “The CFA has been huge for us. We talk to people there, they hear our problems, and it’s just a transfer of information back and forth that helps [everyone]. It’s not all about one person or one group. I’m not afraid of walking in and telling people, ‘this is what worked for this. I don’t know if that’s going to work for you.’ But at least we’re having the conversation, and that’s what the CFA is for … If you’re in the restaurant business or any business in franchising, you get into the CFA.”