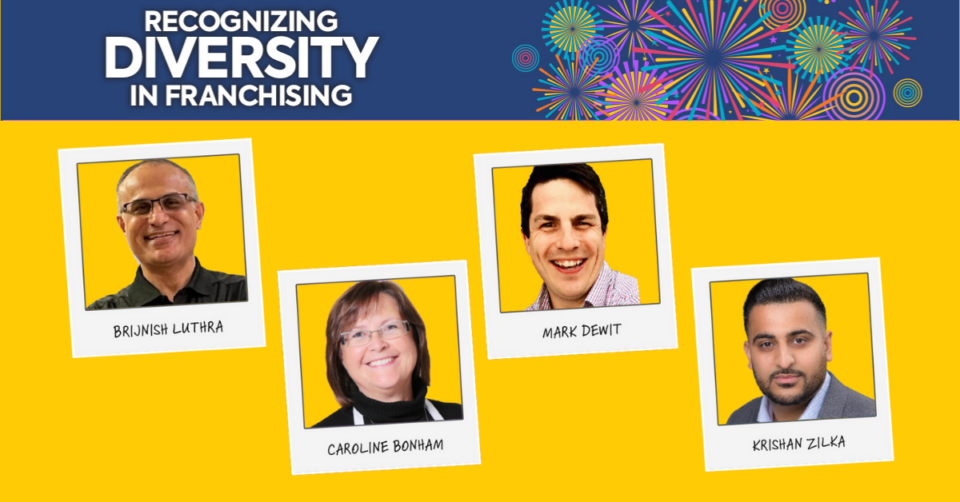 As the old saying goes, age is just a number. Of course, that’s not entirely true, but as you’ll read in these four franchisee stories, age doesn’t have to be the central factor in deciding whether or not to jump into franchising. Sure, there can be particular benefits and challenges for business owners of different generations. But as each of these franchisees told us, having the support of a franchise system is the most important element. In the end, whether they were a millennial or baby boomer, success largely came down to one factor: passion.

Brijnish Luthra was 50 years old when he signed up to become the InXpress franchisee for Brampton, Ontario in 2017. Given his background in sales and finance, it was quite the change to pivot to shipping and logistics at such a late stage. But it seemed like the right fit. As he did his due diligence, he not only found that InXpress suited his budget, but that it was professionally run and had a proven business model.

One core part of that he’s appreciated the most is that it’s more about creating strong relationships with customers than it is about selling to them. “Our approach is very consultative,” he says. “Over the last five years, I’ve developed quite a few very good relationships with some of my customers—they just love it and they trust me.” Luthra says he’s built that trust by always trying to add value to their business and provide them with the best possible solution.

Looking back, Luthra says he has no regrets about joining InXpress. The franchisee training program and ongoing supports from corporate are “very good,” he explains. Plus, the Canadian franchisees are a tight group who all help one another.

It’s taken a lot of hard work to build a profitable business, he says, but it’s certainly helped that shipping services are something that people always need, pandemic or not. “I really feel fortunate to have invested in a business that has provided a frontline service during this pandemic. And it’s really satisfying to be able to help our customers navigate their businesses during this [difficult time].”

As for the advice Luthra would give to others thinking about getting into franchising later in their careers: go for it. A thorough due diligence process is always important, he says. As is being honest with yourself. But in the end, age doesn’t really matter. “Age is just a number. Go ahead and follow your dream, whatever you’re trying to achieve.”

Caroline Bonham wasn’t looking for a franchise when she found Lice Squad.com in her early 40s. She had been enjoying a 20-year career in communications, but became interested in the head lice removal business after a personal experience. “Once I found out that Lice Squad.com was a franchise system, I assumed it was interested in growing nationally, that brand consistency would be very important, and that I’d have to pay royalty fees. That was it,” she says of her decision to join.

It was a good choice indeed. Bonham has grown her business exponentially over the past 15 years and now has two territories: London-Sarnia and Kitchener-Waterloo in Ontario. She says that her two biggest achievements are the retention of her contractors and the word-of-mouth referrals from past clients. “I advertise minimally because this is the type of service that moms tell other moms. We have high ratings and excellent feedback following our service, so this is the best measure of success to me.”

One of the main benefits of being a Lice Squad.com franchisee is the company’s hands-off approach, says Bonham. Franchisees are usually able to make local decisions about marketing as well as how to manage and administer their own businesses. And because the franchise is relatively small—21 locations in Ontario and 11 more throughout Canada—each franchisee’s voice counts when changes are proposed.

Another benefit is that Bonham, now in her late 50s, could choose to scale back or sell the business. She does find the physical work more demanding now, but she still enjoys it. “This is the type of business that I could continue into retirement, just working a day or two a week and contracting out other aspects of the business. There’s also a small possibility that one of my grown daughters might like to inherit the business and take over from me. That would be a perfect scenario.”

When you’re the franchisee of a tutoring service for kids, it helps to feel like a kid yourself. That’s not a problem for Mark Dewit, 35, who leads Scholars’ Calgary West location. The former Canadian Football League player calls himself “the biggest kid” in the tutoring room, easily going from conversations about sports to the finer intricacies of Pokémon.

“I’ve said it to every one of our teachers and parents: there’s lots of teachers out there, lots of tutors, but if you can’t connect with the students and make it an enjoyable experience for them and not [have them] feel the negative connotations that can come with tutoring, then it’s not going to be successful,” says Dewit.

Success hasn’t been much of an issue for him. Before opening in July 2020, Scholars, which provides personalized tutoring to students in kindergarten up to grade 12 in almost all subjects, didn’t have a presence in Calgary. But now Dewit says that Scholars is the name his community turns to.

A big reason for that is the personal connections he and his tutors make with students, he says. The support from the franchise has also been huge. “Head office has people who are experts in a few different fields, so it’s nice to be able to have somebody you can turn to and not have to make every single decision yourself.” Dewit doesn’t have a teaching background, so the education support has been particularly helpful, he says.

Still, that lack of teaching experience, combined with his age, means that sometimes Dewit has to work hard to earn the trust of parents. That’s where his ability to connect with people—and show his passion for education—comes in. “If you’re passionate about [what you do], if you can surround yourself with people who are a good resource for you, then that’ll set you up for success,” he says.

For Krishan Zilka, now is the time for millennials like himself to show the world what they’re made of. “We’ve done our studies, we’ve worked our corporate jobs,” he says. “We’re in that generation where we’re trying to build our futures, our families. And being 32, I have that energy right now to come in every morning full-fledged.”

Zilka has been bringing that energy to his The UPS Store franchise in Orangeville, Ontario for less than a year. But in that short time, he’s put his business on track to break even and has even hired support staff. He credits that early success to a few factors, including the brand recognition of The UPS Store, the company’s franchisee support systems, and the community of Orangeville itself, which is “so welcoming” to small businesses like his.

However, there are challenges that come with being such a relatively young franchisee, says Zilka. Number one is building the trust of customers who might not think millennials are capable of decision-making roles yet. He does that by being in the store every day and making contact with every customer.

“If they don’t see me in that decision-making role today, the next time they come in the store, they’re going to see me here. And they’re going to keep seeing me here.” That repetition is what encourages trust, he adds.

Yet, as important as that passion and dedication is to Zilka and other millennials like him, so is avoiding burnout. Thankfully, The UPS Store’s reasonable hours of operation allow him to do that, he says. “Our generation is a little different. We want work-life balance. And I think that’s the biggest thing that really intrigued me about The UPS Store network. It allowed me [that balance], because at 32, I’m thinking about settling down and having a family, and I think this will give me the opportunity to do so.”