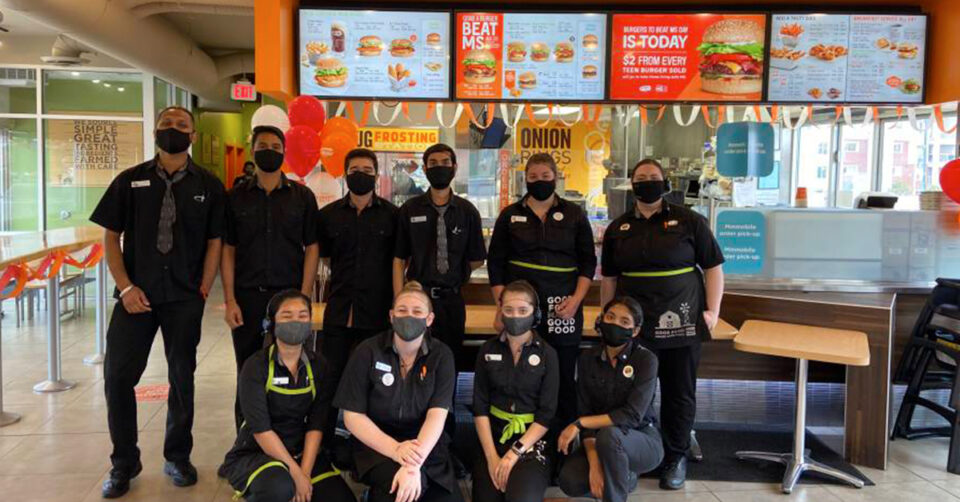 Some guests might enjoy their burgers with a side of fries, onion rings, or a milkshake, but at A&W you can get all those fixings while also donating to an important cause. During the past challenging year, brands like A&W have kept charitable donations at the forefront of their values, highlighting the importance of giving back during difficult times.

A&W first started serving up burger patties in 1956 with a drive-in restaurant located in Winnipeg, Manitoba. Since then, the Canadian-born franchise became one of the biggest and fastest-growing companies in the quick service restaurant (QSR) industry with nearly 1,000 locations operating across the country.

In 2008, the QSR franchise formed a national partnership with the MS Society of Canada to support Canadians living with multiple sclerosis (MS). The partnership includes A&W’s annual Burgers to Beat MS campaign that took place last year on August 20.

“We continue to partner with the MS Society because it touches so many Canadians. Canada has one of the highest rates of MS in the world, so it feels very relevant for us being a Canadian business,” says Julia Cutt, director of brand communications and digital marketing at A&W. “It’s important to help raise funds, whether that’s for research or for one day finding a cure.”

According to the MS Society, the autoimmune disease affects the central nervous system and causes symptoms including impaired vision, weakness, extreme tiredness, lack of coordination, and mood changes. MS is often diagnosed in adults aged 20 to 49 and there are an estimated 77,000 Canadians living with the disease.

On Burgers to Beat MS Day, A&W donates $2 from every Teen Burger® sold to support Canadians living with MS. In their 12 years of fundraising, A&W has raised a total of $16 million, with 2020’s campaign contributing $1.3 million.

The partnership was started by a group of A&W franchisees who got in touch with their local MS Societyreps. “They decided this is an important charity we want to raise funds for and then it grew from there,” says Cutt. “So it was a few restaurants in Saskatchewan, then the whole province, and then we as an organization said, ‘this is actually really important and we could have quite a big impact if we did this as a national program.’”

With the COVID-19 pandemic introducing unexpected challenges, Cutt says the A&W team had to make some slight changes to their regular campaign. “The big difference was that we encouraged our guests to take out as much as possible. Usually our restaurants will have big events and groups that come and dine in but this time a lot of that turned into, ‘come to the drive thru, use the mobile app to order, order delivery so you can eat your burger at home.’”

For customers with an extra appetite for giving back, A&W offers a variety of other ways to donate. They run a four-week campaign leading up to the day where guests can donate while they’re in the restaurant placing their order or can round up their bills for an easy way to contribute. Last year, A&W introduced a matching fund where any E-gift card purchased online during the four weeks was matched and donated to the MS Society.

In 2017, A&W partnered with Christine Sinclair, Olympic gold medalist and team captain of Canada’s women’s soccer team. She has a personal connection with MS since her mother, Sandi, has lived with the disease for over 30 years. “She decided it was time in her career that she wanted to bring some more awareness to MS and help with that cause, so she became one of our spokespersons for it,” explains Cutt. “She has such an inspiring story, and she does a really nice job of educating Canadians about the disease and why it’s important to raise funds, so it’s been really great getting to work with her.”

The MS Society isn’t the only way that A&W and their franchisees support their communities. While Cutt says that there are “too many organizations to name,” she points to local hospitals, homeless shelters, food banks, and COVID-19 healthcare workers as just some of the many causes that franchisees give back to.

“One of our phrases or mantras at A&W is this idea of ‘change is good.’ We all share this innovative mindset of how we can do things better and what changes we can make to not only improve our business, but the world around us,” says Cutt. “I think you see that in a lot of the work we do.”

The First Year: Transporting the Community