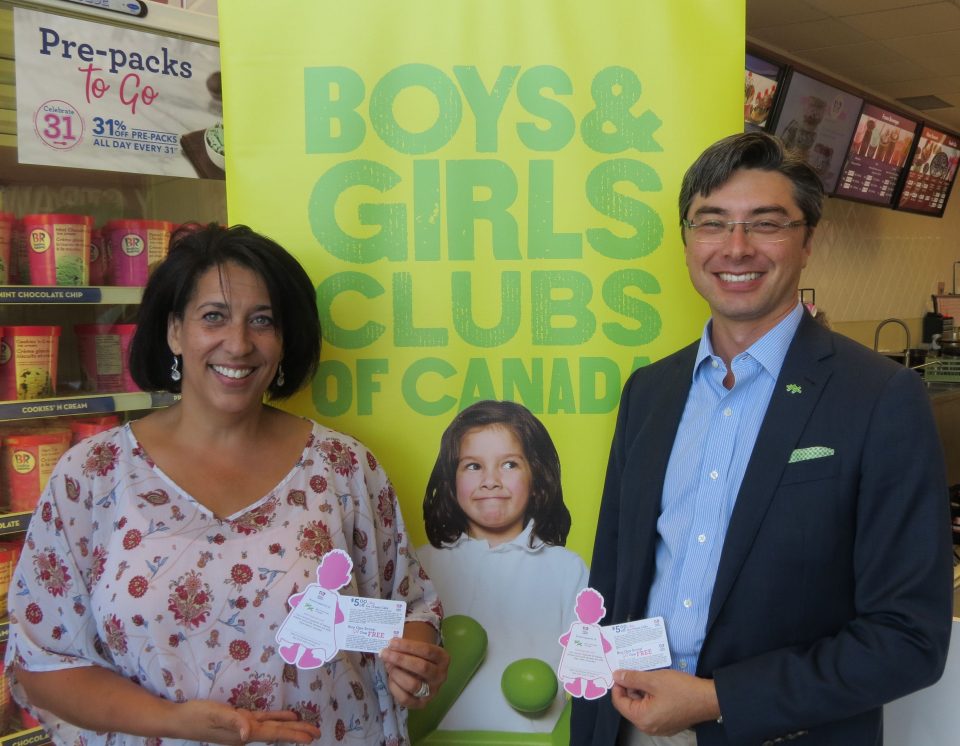 A couple of years ago, Baskin-Robbins was looking for a great charity partner that aligned with its brand values. For an ice cream franchisor with a focus on family and fun, what better match than an organization providing ser­vices to children? In September, this relationship was made concrete with a “back-to-school heroes” fundraiser that saw Baskin-Robbins donate 31 cents for every personalized cake sale in the month of September to Boys and Girls Clubs of Canada.

In addition to the offer on per­sonalized cakes, customers were also invited to donate whatever they could (often a dollar or two), with paper icons celebrating their gift (and a store coupon to sweeten it). The program was so well received by franchisees and their customers that the franchise decided to extend the campaign to the end of October, and raised a total of $10,902.70. Addi­tionally, a July “flavour of the month” (BeaverTails Pastry® Ice Cream) fun­draiser brought in $3,737.30.

While Baskin-Robbins has long raised money for charitable causes, both with a previous partner and at a local level with franchisees support­ing various community groups like local sports teams, the search for a new national partner was driven in part by the desire to find an organi­zation where their donations would really make a difference. Baskin-Rob­bins Field Marketing Manager Nata­lie Joseph says Boys and Girls Clubs stood out immediately. “It’s a great fit, one where our donations would have a bigger impact,” she says.

Boys and Girls Clubs of Canada is equally happy to be chosen as the franchise’s new partner. “We were thrilled to join Baskin-Robbins Canada to celebrate back-to-school heroes this year. Local franchisees generously donated their time and energy to run a successful cause campaign, demonstrating an incred­ible commitment to the communities where they live and work,” says Owen Charters, President and CEO of Boys and Girls Clubs of Canada. Founded in 1900, Boys and Girls Clubs of Canada is Canada’s largest child and youth-serving organization, provid­ing after-school programming to over 200,000 young people in 700 commu­nities across the country. Clubs offer programs and services that help children and youth realize positive outcomes in self-expression, academ­ics, healthy living, physical activity, mental health, leadership, and more.

Joseph says the choice for a new charitable partner was also moti­vated by the parent company’s established values. Dunkin’ Brands has a charitable organization called Joy in Childhood that is the focus of all of their fundraising. “We wanted to align with what the U.S. is doing. And children just make sense for us: ice cream and kids and bringing joy and excitement and special occa­sions and memories,” says Joseph, adding that the overall impulse to give back is baked in to the organi­zation’s mandate. “It’s part of our corporate social responsibility. We want to be community partners. We want to have strong healthy relation­ships and support and give back to the communities in which our fran­chisees are in.”

That’s another bonus for the new partner, the fact that there are Boys and Girls Clubs all across Canada. “We knew that Boys and Girls Club would be super impactful because they truly are in every community in which we are. They touch families from one coast to the other,” says Joseph, adding that her personal experience confirmed the impact of the organization. “When I was seven to 12 years old, that was my after-school home base,” she recalls.

With a few campaigns success­fully rolled out, Joseph says her next step is to look back on year one of the new partnership in order to figure out where to go next. “At the end of the year, we’ll assess what worked, what didn’t, what we want to enhance on, what we want to improve. How we can just make it bigger and better. We definitely want to have a long-term relationship and partnership with the Boys and Girls Clubs.”

Q: How do I attract customers to my franchise with signage?