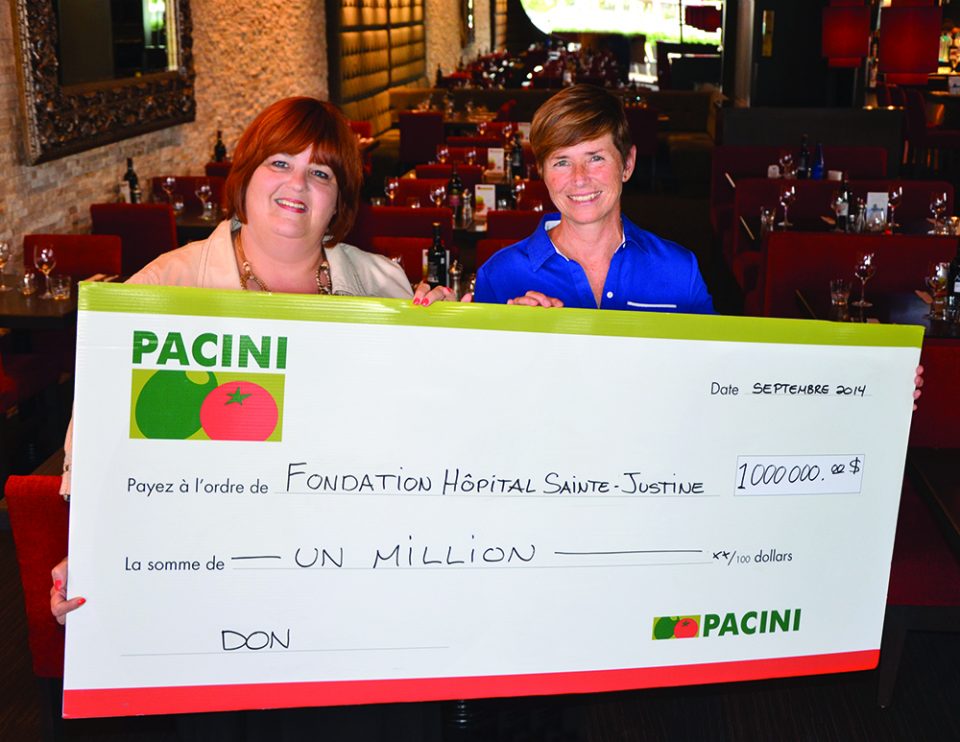 Love the Food, Love the People. It’s a simple slogan, and yet for Pacini, these words are at the heart of everything they do. For nearly 40 years, the franchise has been doing more than serving Canadians authentic Italian cuisine. In fact, taking care of others and giving back to the community have been driving forces for the Quebec- based restaurant franchise since its founding in 1980.

“Love and sharing are the most important things at Pacini,” says Marc-André Rivard, Pacini’s Vice President Marketing Consultant. “We believe in our ability to be unconventionally loving and generous, and in our collective power to make a difference in our communities.”

Making a difference has come almost too easy for the growing brand and its franchisees. In 2002, the franchise partnered with the CHU Saint-Justine Foundation in Quebec, helping to raise $1 million over a ten year period towards the construction of a specialized building at the hospital. But for Pacini, this contribution wasn’t nearly enough.

So, in 2013, the franchise made a unanimous and permanent commitment to give back on a daily basis. From there, they founded the For the Love of the People program. Initially, the program started with a cookbook featuring the recipes for some of Pacini’s classic menu items. The cookbook, Love the Italian Table, was sold at all Pacini restaurants with the profits distributed to disadvantaged groups in the franchise’s markets.

Within a year, the program was a huge success among franchise partners and customers alike, inspiring Pacini’s head office to revamp the initiative to get their franchisees even more involved. Today, existing and onboarding franchisees are asked to select a local organization or charity near their restaurant that they feel inspired to give back to. Every time a Pacini customer purchases the restaurant’s Lasagna of Bologna off their menu, one dollar is donated to the franchisee’s charity of choice.

“If you want to become a Pacini franchise owner, you have to understand the importance of giving back,” says Rivard. “All our franchisees are dedicated and enthusiastic about the For the Love of the People program. We see our owners creating bonds with their local communities and making the most out of these new relationships all because they want to help people.”

To date, For the Love of the People has raised $350,000 for 25 local organizations across Canada, and Pacini’s contributions are being recognized on a national level.

Presented annually, the Outstanding Corporate Citizen Award recognizes a CFA-member franchise system that has demonstrated genuine and ongoing concern and support for a community or social service group. Each year, the recipient is selected based on their philanthropic innovation, support and impact to the community whether that be on a local, regional, national or global scale.

“The entire Pacini team was happy and proud of the recognition, but receiving the award wasn’t our end goal,” says Rivard. “One of the great things about the recognition was that it has helped raise awareness for the For the Love of the People program. The more people who know about it, the more our franchise owners can help people in their community.”

Looking ahead, Rivard says Pacini has no plans of slowing down the program. Giving back is a central aspect of Pacini’s strategic vision and head office will continue to promote the program by producing posters and specialized menus for all restaurants, in addition to running web and social media campaigns.

What’s more, the brand plans to open an additional 200 new restaurants across Canada over the next ten years, which means another 200 local Canadian organizations will experience first-hand the impact of Pacini’s charitable giving. And that’s something that leaves a good taste in everyone’s mouth!

Q: As a franchisee tenant, what questions should I ask about the landlord, the property manager, and the property itself?