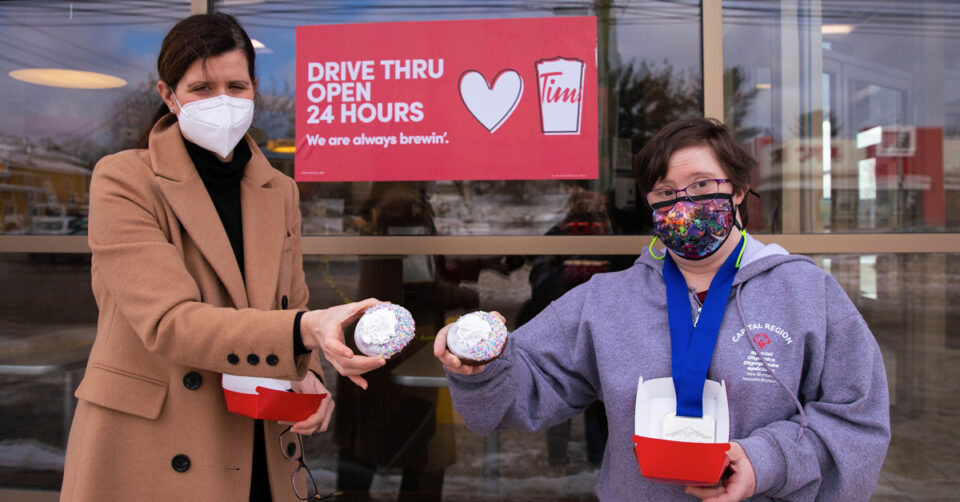 For 58 years, Tim Hortons has been known as a national coffee and baked goods restaurant brand admired by Canadians from coast to coast.

With 5,000 restaurants across Canada and 14 other countries around the world, the brand has always put community initiatives at the front of its focus.

“Tim Hortons has a longstanding history of supporting and giving back to local communities. It’s part of our brand DNA to show generosity and be inclusive, so there’s a number of initiatives that we support year-round,” says Solange Bernard, senior director of marketing communications.

Perhaps the most familiar to guests is the Smile Cookie, 100 per cent of proceeds from which go to support charities and groups in local communities. The Smile Cookie campaign was started back in 1996 to help raise funds for the Hamilton Children’s Hospital in Ontario.

In 2021, Tim Hortons raised more than $12 million from the Smile Cookie, a new record, which helped support more than 600 local charities across the country.

Camp Day, another annual initiative, has helped offer kids from low-income families the opportunity to go to camp and supports them with year-round programming. Over 30 years, Camp Day has raised more than $225 million in support of Tim Hortons Foundation camps.

For the first time in 2021, Tim Hortons introduced an orange sprinkle donut in support of the Orange Shirt Society and the Indian Residential School Survivors Society. The campaign raised more than $1.6 million for the charities and helped raise awareness about Canada’s history with residential schools.

The campaign ran between January 28 and 30, and 2022 marked the sixth year of the partnership. Bernard adds, “When guests came in and purchased this donut, it went towards supporting more than 41,000 Special Olympics Canada athletes across the country. This partnership is one of the ways that we show our values—[through] action—of diversity and inclusion.”

She notes that in 2019, the Choose to Include donut was sold for only one day in July and raised more than $149,000 in proceeds. With a three-day campaign this year, Tim Hortons achieved nearly $600,000, which sets a new record for the fundraiser.

Guests who supported the campaign got to indulge in a chocolate cake ring donut with white fondant, sprinkles, and a dollop of whipped cream—all while supporting Special Olympics athletes across Canada.

It’s really the franchise owners who help support Tim Hortons’ numerous initiatives and get the word out to keep guests rolling through the doors, drive-thrus, and on delivery apps through charitable campaign days. “We couldn’t do any of these initiatives without the support of our owners,” notes Bernard. “They’re amazing, incredible, and believe in giving back to their communities. They’re advocates of all of these programs and it’s proof because we’ve been doing it for so many years.”

She adds, “[Our franchisees are] upselling, supporting within their own channels, and even had athletes come to the restaurant, where it’s COVID safe and possible, to participate in the campaign day. [So, they] have an opportunity to show our guests and people working at the restaurants first-hand where their money and donations are going and who they’re helping.”

As expected, the pandemic pushed Tim Hortons to pivot their plans throughout multiple lockdowns, but the brand used its unique position to be able to touch communities across Canada at a local level. Bernard explains that franchisees donated coffee and donuts to frontline workers for months in an effort to give back and thank workers for everything they were doing in environments such as hospitals, testing centers, food banks, and bus terminals.

“We also launched a program called Tims for Good, which is a platform where all of our for good initiatives, including some of these community outreach programs, are in action,” says Bernard, noting that it started in 2020 and is still running at the time of writing. “We have trucks that are wrapped with Tims for Good, and they’re in local communities going around and doing drops of donuts and hot beverages to people in need and those who are servicing and keeping our communities up and running.”

Tim Hortons will continue thinking about ways it can give back that represent the brand values and can raise funds and support initiatives that are near and dear to the hearts of Canadians from coast to coast.

“[Charitable giving] really represents the values of our owners, corporate staff, and of Canadians: generosity, inclusivity, and giving back,” concludes Bernard. “Being welcoming and friendly are the things that we absolutely stand behind and we want to make sure that everything we’re doing delivers upon that.”