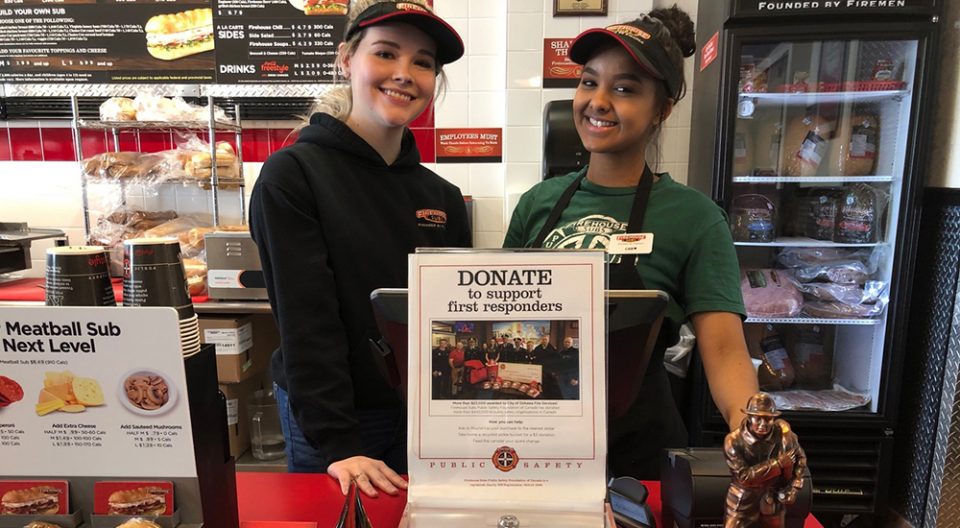 Step into any Firehouse Subs location and it’s clear right off the bat where the franchise’s heart is. With the tools of the trade, uniforms, and other police and fire memorabilia lining the walls of the quick service restaurant’s fire station-themed décor, every Firehouse Subs location is a celebration of the men and women serving their community as first responders. Even the franchise’s extensive menu of submarine sandwiches has nods to first responders, boasting subs with names like the “Hook & Ladder” and “The Engineer.”

Launched in 1994 in Jacksonville, Florida by brothers Chris Sorensen and Robin Sorensen, both former firefighters, Firehouse Subs serves up a wide range of hearty submarine sandwiches packed with quality meats, cheeses, and toppings. It was after lending a hand in the aftermath of Hurricane Katrina in Mississippi in 2005 that the Sorensens decided to take the franchise’s commitment to honouring first responders a step further with the formation of Firehouse Subs Public Safety Foundation in the U.S.

“They have always been cognizant of the needs of first responders,” explains Robin Peters, executive director of the U.S. Foundation. “After Hurricane Katrina, they went into Mississippi and that whole area that was devastated. They were there for over a week, feeding first responders and volunteers. It was a game-changer for them. Heading back from that disaster, they were excited to do more, as we were in a position to create a foundation to help first responders across the country.”

In 2015, the Canadian branch of the Foundation was launched shortly after the franchise opened its first restaurant in Oshawa, Ontario. In just a short amount of time, the Firehouse Subs Public Safety Foundation of Canada has provided close to a million dollars in grant funding to public safety north of the border. According to Peters, the success of the Foundation in Canada has been boosted by the enthusiasm of franchisees – all of which are in Ontario at the moment as the franchise looks to expand into the rest of the country.

“The culture of philanthropy is part of the brand’s philosophy,” she explains. “I have to tell you, these Canadian Firehouse Subs franchisees are the best of the best. They embrace it and are excited to be a part of not only a great restaurant concept, but also to give back to the community.”

It makes sense that the franchise owners of the 33 Firehouse Subs locations in Ontario have bought into the franchise’s commitment to supporting first responders. When looking to bring franchisees on board, they must have a passion for community service. Giving back to the community is a big part of the brand and the onboarding process for new franchisees, Peters adds.

As the franchise pursues aggressive expansion throughout the Great White North, they’ll be looking to grow on the tremendous success the Foundation has seen in Canada in just five years. In addition to providing funding for badly needed, and quite expensive, lifesaving equipment to public safety departments, they’ll also look to establish the brand as a beacon of public safety in the communities they serve.

“What we look to do is – while providing life-saving equipment – educate and support programs that help save lives, but also educate citizens. Whether it’s fire safety or CPR training, our goal is to impact and save lives,” says Peters.

From what she’s seen from the group of Canadian Firehouse Subs franchisees so far, Peters has little doubt that the brand will meet its philanthropic goals.

“I’ve been in the non-profit world for more than 30 years, and have been inspired by the Canadian restaurants and their commitment to the foundation,” she explains. “From the owner of the business – the franchisees – right down to the person at the cash register. They understand it and they embrace it. Because of that, they raise more money for the community and first responder departments. I cannot put into words how committed they are.”

Franchising Gives Back During Crisis