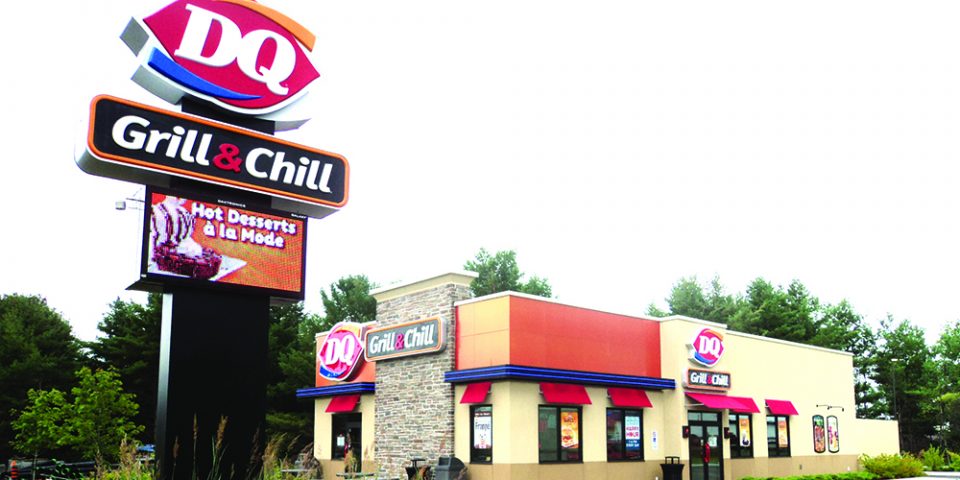 When I was a kid, one of my favourite family rituals was going for a Sunday drive. Before we headed home we would stop for ice cream – a vanilla cone with the signature ‘swirl’ (or ‘Q’) on top. Mine is the kind of story that Dairy Queen franchisee Marc Cardinal hears often. “When you tell people you own a DQ, everyone has a memory they want to tell you about, and it’s always a story about spending a moment with family or friends.”

“We call it a smile and a story,” says Tony Watters, director, franchise development for Canada. “DQ has always been associated with celebration, and even though it has evolved from ice cream treats to Grill and Chill, that still holds true.”

Dairy Queen is an iconic brand that has its roots in the Homemade Ice Cream Company, established by the McCullough family in 1927 in Illinois. After developing soft-serve ice cream, they served their first ‘Dairy Queen’ product in 1938. Five years later, the company established franchise territories and began selling DQ licensing rights. From the beginning, the goal was to grow a national franchising system, and by 1950, there were 3,000 DQ locations across the United States.

In 1953 the first store to open outside of the U.S. was in Estevan, Saskatchewan, and two years later, the Dilly Bar, Banana Split, and other new products made their debut. When the Brazier (charcoal-broiled) burger was added to the menu in 1961, DQ began to see an increase in its hot food sales, and by 1970, DQ was the third-largest fast food chain in the U.S.

By 1976, DQ had expanded its operations beyond North America, with stores in nine countries, ranging from Panama to Iceland to Japan. The brand introduced drive-thru windows in 1980, and continued to expand both ice cream treats and hot food options. When the concept rebranded in 2001 to Dairy Queen Grill & Chill, it cemented its position as a QSR with equally impressive hot and cold ‘fan food’ (not fast food!) menus.

Cardinal’s parents purchased their first Dairy Queen location in Edmonton, Alberta in 1980, and Cardinal remembers his first ‘job’ when he 10 or 12 years old was cleaning tables and picking up garbage. After studying business at the University of Alberta, Cardinal bought into the family business in 1999 and became the second-generation owner-operator. His business studies at university have been helpful, but Cardinal feels that having food industry experience is even more valuable for new franchisees.

Today the Cardinals own six DQ locations (the latest one was purchased in 2018) – five free-standing stores and one “treat centre” in a mall. After DQ introduced its new restaurant concept, in 2003, the Cardinals opened Canada’s second Grill & Chill® – the first in Western Canada. In addition to the iconic brand recognition, Cardinal says the high quality and taste of both hot and cold products and the friendly environment are what bring people back and help build a steady regular client base.

With his parents transitioning to retirement, all six stores are managed by Cardinal, his wife, and his cousin (who has joined the business as a minor partner). Ideally, a franchise owner-operator is hands-on, and the three make an effort to have at least one of them on site in each store daily. They’re in the fortunate position of having long-term managers in place in whom they have total confidence. “Some of them started working with us when they were teenagers, and they’re in their 30s now. We know they have our backs, and they know that we have theirs,” says Cardinal, noting that the owners have an open-door policy and can be reached 24/7 if the need arises, even when the stores are closed.

Adding staff to the family

Keeping long-term staff doesn’t just happen, though. In fact, Cardinal cites staffing as one of the biggest challenges that QSRs deal with. “I would say that the main challenges that are constant in the restaurant business are increased competition and labour shortages. Every month, there seems to be a new concept that is looking to steal market share and labour from surrounding businesses. I think this can be managed, however, through great customer service – whether it’s external customer service with our DQ fans, or internal customer service by treating our staff like family.”

Cardinal has 90 to 100 employees year-round and he adds more in the summer when there will be 140 to 150 on the payroll. “We try to pay above minimum wage, and to be flexible when we are scheduling shifts. Millennials have to have access to their phones, so we tell them when times aren’t too busy you can use your phone, just make sure you put it away when it starts to get busy.”

Low staff turnover seems to be woven into the fabric of company culture. “Long-term staff are not uncommon. Even at the corporate end, we have staff who have been here for decades, and there are strong relationships between corporate staff and franchise owners,” says Watters. Recognizing the challenge that franchisees can face when staffing their stores, the operations team has introduced a third-party recruiting tool that engages potential employees through social media platforms.

Another new addition to the company’s tool kit is the use of analytics in the site selection process for new stores. There are opportunities in all provinces, says Watters, both for new franchise owners and for existing owners to open additional sites – both standalone stores and Treat Centres in malls, college and university food courts, and other venues. The main targets for future franchise growth are the introduction of Grill and Chill restaurants in Quebec (currently all DQs in the province are Treat Centres), and new locations in Northern Ontario and Manitoba to replicate the successful ‘small-town local ownership’ formula that has fuelled expansion in Saskatchewan.

With every new location, whether acquired or built from the ground up, franchisees participate in DQ’s three-phase certified manager training program. “It’s very comprehensive and gives a great foundation for any new operator,” says Cardinal. “The first two phases are held in an open and active DQ restaurant, so there is a lot of practical hands-on training around product, equipment, systems, and leadership. In phase three, you dig into the numbers, learn about managing different kinds of people, and focus on profitability. We also receive a great deal of support from DQ Business Consultants, who make individual store visits and help set up systems and best practices to deal with any individual store challenges.”

Watters believes that with the company’s comprehensive training program, anyone who goes through all of the steps in the vetting process and is accepted as a franchisee will be well prepared to run a successful Dairy Queen franchise. He recommends that potential franchisees have some food service experience and an understanding of the restaurant or retail industry.

And he shares this advice with people who are exploring the purchase of any franchise: “It’s a big decision – do your homework. Choosing a franchise concept is like choosing a life partner. We expect people to go out and visit different locations to get first-hand information, and to understand what they are getting into.”

The First Year: Dealing with Disaster

The First Year: The Rise of a Superhero