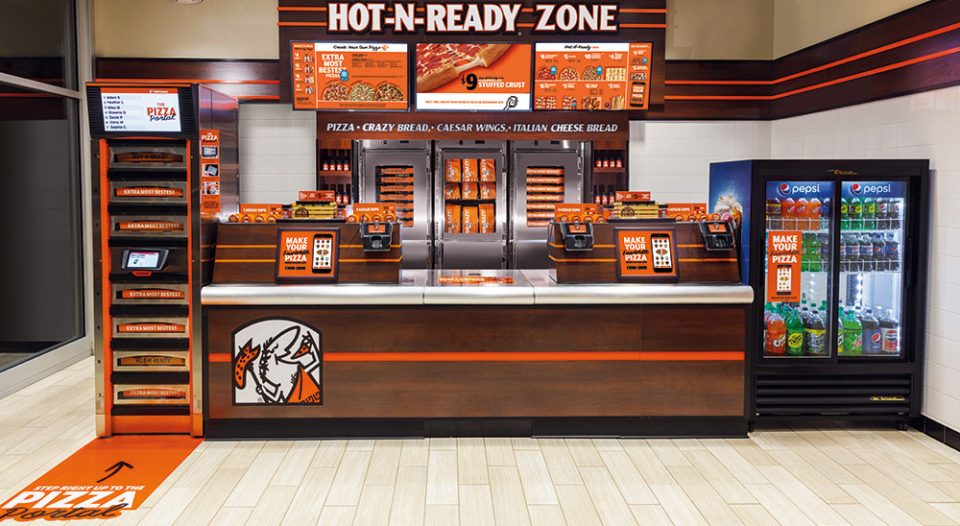 Founders Mike and Marian Ilitch invested their life savings and took a big risk when they opened the first Little Caesars in Garden City, Michigan in 1959. The store sold dozens of pizzas the first day, Marion carefully noting the sales in a spiral notebook.

As they continued to experience early success, the couple realized the need for quality product at a reasonable price point and began growing and expanding through franchising in 1962.

By the end of the 1960s, the company had built more than 50 restaurants, including its first franchise in Canada. Today, thousands of locations can be found worldwide in 26 countries.

Though the brand offered delivery in its early days, it switched to a carry-out model in the 1970s. The move propelled them forward as they quickly became known for their iconic Hot-N-Ready offering, a model that allows customers to walk in and out in 30 seconds or less and purchase a large pepperoni pizza for $5.00. The concept was so well received, it become a permanent fixture of the chain.

Over the years, the Ilitches continued to grow and expand the business in creative ways, purchasing a mushroom farm to improve quality and pricing. They also launched an offer for two pizzas for the price of one, a concept that spurred other chains to follow suit. Even the Little Caesar himself, the man in the logo, has received updates to refresh his look, a hidden ‘L.C’ woven into the design of his toga.

The company has come a long way from the days when Marian carefully noted the store’s sales in a spiral notebook. Always innovative, their most recent launch, the Pizza Portal Pick Up, embraces technology and incorporates the needs of today’s customers. The concept provides customers the convenience of mobile or online ordering where they can craft their pizza and pay for it ahead of time. The app sends a notification when the order is ready, and customers can bypass the lines and counter and go directly to the Pizza Portal pick up, where they use a three-digit pin or scan a QR to open a secured, heated compartment. Hot, fresh, easy as pie.

Little Caesars also recently married convenience with value when they launched an all-new delivery option, which allows customers to enjoy the same everyday menu pricing, whether they choose pick-up or delivery.

Where does a brand with no pie-in-the-sky limits go next? In an industry that earns over $145 billion dollars worldwide, Little Caesars brings a lot to the table. They offer 60 years of experience, well-developed processes, a solid business model, and unparalleled support. Their next goal? To be the top pizza chain in Canada. Their plans for growth and expansion include Alberta, Ontario, and the Maritimes.

A model that offers franchisees a piece of the pie

After a few years at home with her children, New Brunswick franchisee Tara Charters wanted to segue back into the workforce with an opportunity that offered flexibility. “In our area at the time, there was a Little Caesars on the other side of the city across from the mall that everyone would go to. We thought it would be great to have one on our side of the city. We started hearing everyone else say the same thing,” she says. She was first drawn to the brand as a customer, often taking advantage of the Hot-N-Ready offering to help balance the juggle of daily demands by grabbing something on the go with the kids on busy soccer nights.

After looking into Little Caesars further, Charters was sold after the initial one-day training. “We were making dough from scratch and saw the quality of the products. I felt really good about the fact that I was giving it to the kids, because it was fresh dough, fresh cheese, and I was making the sauce myself.”

Charters opened her first store in 2010, alongside her partner and brother-in-law. In the last 10 years, she’s expanded and opened two additional locations. “My favourite part of being a franchisee is being in the community and bringing something that is useful and needed,” she says.

As with any new business, there were a few surprises in the early days. “I think what always surprises you the most is when you get in the thick of it,” Charters explains. “With staffing, you’re always trying to find what’s next. Labour costs is something that is always our unknown. You buy into the system, and you follow the system and you trust the people they have in place to help manage the system so that it all works in tandem.”

Charters says the initial one-day training that Little Caesars offers, a discovery day, was an integral part of helping decide if the concept was a good fit. “The one-day training before interviewing was a day to work in store and see if we liked it and liked the product prior to pursuing it further. That made a lot of sense to me.”

Once on board, six weeks of training in Ontario helped prepare for the store opening, and corporate support on the ground helped ease into the reality of daily operations. Ten years later, Charters still speaks with her area manager at least once a week. “We have great partnerships and great operational support from the franchise. It’s a two-way street. I am really engaged in wanting to maintain that connection and in response, they are very accepting of that engagement. To me, that is why you go into a franchise system. I came in wanting support and wanting a connection with other franchisees and the franchisor.”

With just two franchisees in the province of New Brunswick, the Atlantic region was a playground of possibilities in the early days. Charters became an integral part of expansion, helping train new franchisees as the region grew. “When we came on board, there were no stores in Price Edward Island or Newfoundland, so it was very exciting to help train them and watch them grow as a region.”

She adds that the Atlantic franchisees are exceptionally close, often seeking out one another’s opinions and staying informed on sales and operations. “We feel it’s better to work as a team. When you start a business, nobody else really understands what that’s like, but the other franchisee in New Brunswick knows exactly what it’s like. There’s someone else going through the same thing I am.”

Charters advises prospective franchisees to attend the one-day training and really look at the opportunity objectively with open eyes. She adds that it’s important to acknowledge and accept that the franchise is a system and a model, and a part of training is determining if it’s the right fit.

As the concept continues to add new offerings, Charters says it’s an exciting time to be a franchisee. “We have work to do. We are bringing in new technology and delivery for the first time since I’ve been a franchisee. I really think the portal and the delivery option is something that we are just starting to scratch the surface on. It keeps those of us that have been around a long time engaged.”

One of Charters’ favourite things about owning a business is the ability to get involved in the community, whether it’s providing an opportunity for high school kids to broaden their horizons through a cooperative mentorship program or offering a helping hand to a local family during a stressful time. “One of the best feelings is that you can do something quantitative in your neighbourhood. Everyone needs good food,” she says.

Day in the Life: A Franchising MVP