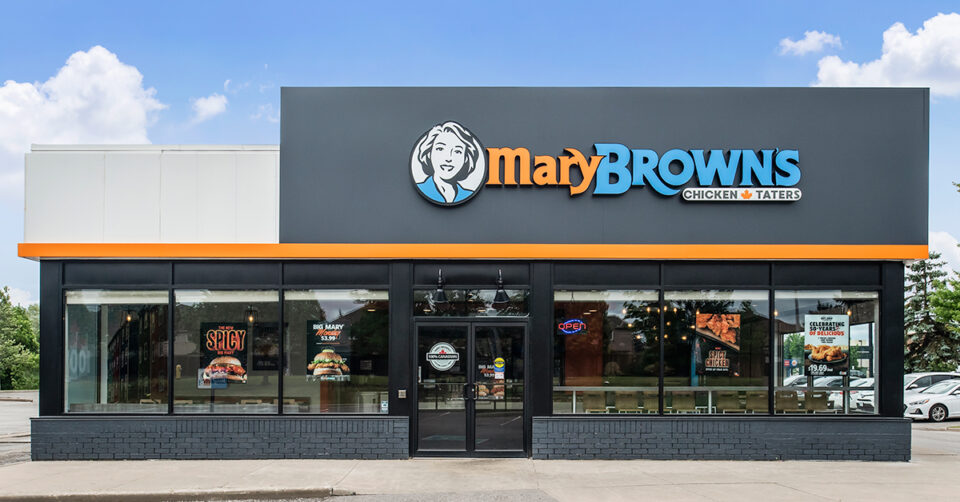 Mary Brown’s Chicken has been serving customers for more than 50 years, while creating rewarding business opportunities for Canadians

In 1969, as the world watched Neil Armstrong set foot on the moon, the first guests walked through the doors of Mary Brown’s Chicken in St. John’s, Newfoundland & Labrador. As the company likes to say, “it was a giant leap for chicken,” and soon stores opened across the province and eventually the country. Today, there are over 180 locations, and by 2022, the company expects to have 300 locations under the Mary Brown’s banner.

Much of that growth has happened since 2007, when Newfoundland & Labrador native Greg Roberts acquired the company. Under his leadership, Mary Brown’s store count has tripled. In 2020 alone, the company experienced 20 per cent sales growth and a 10 per cent increase in average unit volume. It was an impressive feat, especially during a pandemic, and Jeff Barlow, Mary Brown’s vice president of marketing, says one big reason for that success was their innovative approach to marketing. “We had to do a 180-degree turnaround and change all of our plans — to increase sales but also to do our part to support our guests and all Canadians during this difficult time.”

That meant doing things like advising guests how to buy Mary Brown’s via takeout, drive-thru, and delivery, through using e-blasts, social media, and digital ads. It also meant launching a special family deal, doing food drops for frontline workers, and hosting live videos of local chefs creating comfort foods on Facebook and Instagram. In April 2020, the company even paid the Postmedia newspaper chain to remove its online paywalls for the month so that Canadians could read and watch as much news as they wanted at no charge.

That kind of innovation is nothing new for Mary Brown’s, notes Barlow, particularly in recent years. “Our latest menu innovation, for example, was done to satisfy the diverse palettes of Canadians — like the launch of Spicy Big Mary and Spicy Signature Chicken, flavours like Buffalo Mary Sandwich, and Thai Chicken Pop-Ins.”

A new start for new Canadians

That innovative culture was one reason why Sheikh Ali and his wife Ayesha Ali decided to become Mary Brown’s franchisees in the summer of 2019. The couple had immigrated from Pakistan in 2013 with their four children, and although Sheikh had decades of experience as a chartered accountant and Ayesha as a gynecologist, they wanted something different. They wanted something of their own, says Sheikh, and they hoped it would be in the food business because they had a passion for hospitality.

They also wanted an exclusive Canadian brand. “So, I talked to a couple of friends who were franchisees, we did our research, I visited some franchises, and we got really good vibes,” says Sheikh. “And then I got to know more about the culture of the organization and the people who are managing it, and that was what set Mary Brown’s apart.”

The Alis use various words to describe that culture. “Innovative” is one, but they also use “hospitable,” “dedicated,” “transparent,” and “family” several times. They got to know those adjectives very intimately — perhaps more than most new franchisees — before they even opened their location in Georgetown, Ontario in November 2020. Initially, the Alis were supposed to get a location in Waterloo, Ontario, but because of a delay there, Mary Brown’s made an exception to their rule of not giving more than one store to new franchisees and gave them the Georgetown location as well.

By early March 2020, the Alis were in St. John’s, Newfoundland & Labrador, beginning their three-week training program. But then another blow — COVID-19 — and the Alis had to return to Ontario before their training was complete.

Still, Mary Brown’s was unwavering in their dedication and innovation, says Sheikh, letting the Alis train for a month in a Brantford store that was just opening. “So, it was a win-win,” says Sheikh. “The operations team got the firsthand knowledge to see if we were ready, we got the exposure and just walked through the whole process. And then it added to their comfort that their franchisees were ready.”

By November 2020, the Alis’ Georgetown store was ready to open. And what an opening it was. In their first month of business, they were the number one location in the country for sales. Since then, they’ve been in the top five every month.

Two reasons for the Alis’ early success have been Mary’s Brown’s marketing efforts and the company’s ongoing support in general, says Sheikh. That marketing is focused on driving sales and growing brand awareness, says Barlow, and it includes everything from high-impact multi-media marketing programs to location-specific programs. New Mary Brown’s stores are supported by grand opening events, public relations efforts, and media support.

Mary Brown’s also has online training modules that all staff must complete and dedicated regional training directors to answer any question seven days a week. Those directors also offer supplemental training. Recently, for instance, the Alis’ training director held a session on costing. “In food, that is so important,” says Sheikh. “Otherwise, you’re just looking at cash flow coming in, coming out, you’re sitting on this much in your bank account and you’re doing fine, but what are the nitty gritties? What are the opportunities to save? So, he did that in detail.”

Plus, Mary Brown’s has a digital evaluation system that assesses operational processes, service standards, quality control, and hygiene and food safety on a store-by-store basis. Third-party evaluations are also done. “It’s all an opportunity to coach you and keep you on your toes and make sure quality is a habit,” says Sheikh. “And it’s great that they are very transparent about it and that it’s all based on data and numbers. You can’t deny it.”

Not surprisingly, then, Mary Brown’s looks for franchisees who are results-driven and determined to succeed. The company also prefers hands-on owners who have a willingness to learn, innovate, and try new ideas, says Barlow. “Food service experience is also an asset, as is an entrepreneurial spirit, but you must have a commitment to delivering extraordinary guest experiences every time and pride in leading and motivating your team. A genuine love of people and enthusiasm for getting involved in your community are also big assets.”

Looking back over the past couple of years, the Alis say it has been an incredible experience with a few unexpected twists. But they are definitely happy they went with Mary Brown’s. “I could have started anything on my own, but I wasn’t sure because there are so many risks when you start a business,” says Sheikh. “With Mary Brown’s, they give you the space to feel as if you are running a business and not just operating it for them, while at the same time having the systems and the processes in place to keep you in compliance with their expectations. They stand beside you and don’t treat you as if they just want to make a royalty and that’s it. They treat you as family.”