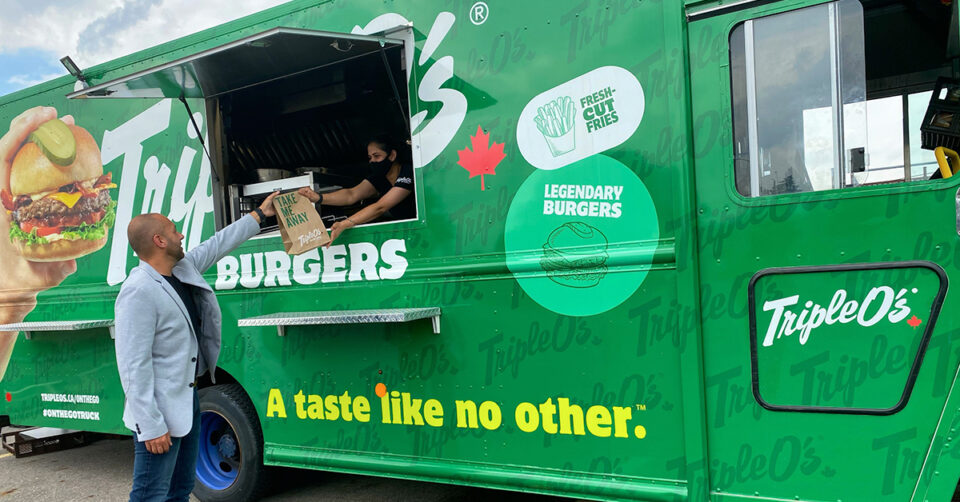 White Spot has been flipping burger patties on the West Coast since 1928, and sister brand Triple O’s is making its way across Canada

White Spot began in 1928 as the first drive-in restaurant in Canada, where car hops with order pads would circle the items a customer requested. The popular order of a burger with extra relish and extra mayo—three circled items—became known as the Triple O, explains company president Warren Erhart. To this day, the Triple O’s special sauce is loaded with red relish and mayonnaise.

Today, White Spot has 56 full service restaurants (seven of which offer car hop service), and you can still find the iconic items that have been menu mainstays for more than 90 years—burgers, fries, and milkshakes—along with salad, craft beer, and other items that have been added to reflect changing consumer trends.

White Spot Restaurants was fully family-owned until 1992 when the first franchise opened. The rising cost of real estate, coupled with the desire to offer customers a high quality alternative to fast food burgers, led to the 1997 launch of Triple O’s, a quick serve restaurant (QSR) that offers a premium menu. With a mix of franchise and corporate locations, the brand has expanded across B.C., into Alberta—and now in Ontario.

Triple O’s serves the same high quality food as White Spot, including 100 per cent fresh Canadian beef, fresh cut Kennebec fries, and hand-scooped milkshakes, but in a smaller footprint. Where a White Spot restaurant would require 5,500 to 6,500 square feet, a Triple O’s is typically 1,500 to 2,000 square feet, says Erhart. Some are stand-alone store fronts, others are situated within sports arenas, hospitals, universities, and college campuses. Some operate inside Chevron service stations—which is where franchisee Teresa Troock first started working with Triple O’s.

Troock’s first QSR job was with a different franchise, starting part-time as a high school student. “I worked with them for 25 years, 15 of those years as a restaurant manager,” she explains. “I left when I was contracted to operate a Chevron station and convenience store, with a Triple O’s restaurant inside. I did that for 10 years and developed an excellent relationship with White Spot corporate home office, so when an opportunity became available, I approached them with the idea of becoming a franchisee.”

That was five years ago, and Troock says she quickly found that being an owner/operator was very different than managing a Triple O’s for someone else. “I had already been through an in-depth training process to learn the basic day-to-day operations and managerial responsibilities, but now I was now fully accountable for everything, from the financials and staffing to maintaining the physical space. It was challenging—I was running shifts and at the same time training and developing newly hired staff. But White Spot really wants you to be successful, and they’re there to provide ongoing training and support based on whatever you require or need.”

Troock was able to build a strong team and a loyal client base before COVID-19, and she was fortunate that her Triple O’s—a stand-alone store located in a strip mall—was designed with a drive-thru window. She was able to continue serving food through pick up, drive-thru, and delivery. “I think that our loyal guests had confidence that we would follow strict safety protocols, and they trusted it would be safe to order from us. Our sales didn’t drop—while many employers were laying off, I was searching to find new employees,” says Troock. “COVID-19 protocols take time to complete each day, and we set the expectations and standards with our team right from the start. All staff were willing to do whatever was asked.”

Troock’s Triple O’s has low staff turnover, and some employees have been with her since she opened. “I’m constantly changing my management style to reflect the needs of my employees. My staff is multicultural, with both millenials and older generation workers. No one leadership style works for all employees … I love watching them grow in their positions, and supporting them to be successful.”

Both Erhart and Troock say that previous restaurant and/or business management experience would be helpful for any new franchisee, but the most important factor is that they believe in the company’s values and philosophy, and really love the White Spot/Triple O’s brand. “There are plenty of people who may have the means to invest financially, but we want them to have the heart as well,” says Erhart. “This is going to be a long-term relationship.”

The company offers extensive training to new franchise owners and has district managers that provide ongoing coaching and support. There’s a virtual learning management system that every White Spot and Triple O’s employee can access regularly to stay informed about new features and promotions. “The business model is easy to implement and operate, and corporate home office provides an excellent support system, from reviewing business results, to financial advice, to tweaking your operations for better sales building,” says Troock. “Pre-COVID-19, annual conferences were held, which allowed us to network within the system.”

There were challenges to deal with throughout COVID-19 lockdowns: procuring supplies, complying with provincial health orders and training staff on safety protocols, adapting technology with a mobile app and arranging for third-party delivery. While the franchise focused on supporting existing franchisees, it also opened eight new locations during the pandemic, including the first two in Ontario. Both are in the GTA, which is part of White Spot’s strategy for entering new markets. “We don’t want any orphan locations,” says Erhart.  The company tries to cluster three or more locations in a short period of time in order to build brand recognition.

White Spot would like to open 30 new locations in Ontario over the next five years. “We’re Canada’s oldest restaurant chain, but we continue to evolve and to be relevant, and to grow in new markets,” says Erhart.

This past May, White Spot Hospitality was named one of Canada’s best managed companies, a designation that it’s achieved annually for the past 11 years. Then in June, White Spot/Triple O’s was awarded a gold medal for Excellence in Franchising from the Canadian Franchise Association, an achievement that Erhart is proud of because it’s based on an anonymous survey of franchise owners. “We’ve received gold, silver, and bronze awards over the years, which confirms for me that there is a strong alignment between our strategy and its execution at the front lines. We pride ourselves on constant communication, listening to our staff and our guests, and being responsive to what they are telling us.”

Day in the Life: Sweeping Success

Day in the Life: Sweeping Success

Online Exclusive: Why You Should Become Your Own Boss in 2022