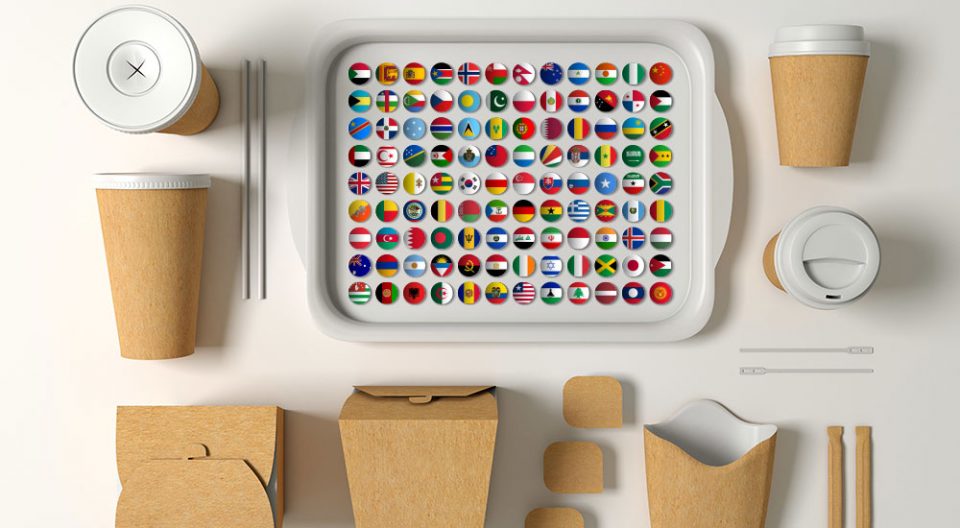 With the diversity of our population, it’s not surprising that Canadians also love a diversity of foods. When it comes time to order a quick bite – whether you’re on the street, at the food court, or having it delivered – there are a variety of international taste options. Quick service restaurant (QSR) franchises are serving traditional dishes from around the world, sometimes with a uniquely Canadian twist.

Poké (rhymes with okay) is a centuries-old Hawaiian dish, traditionally made of cubed salmon or tuna served raw in a bowl with rice, kale, vegetables, and spicy and sweet sauces, explains Jason Cunningham, co-founder of Hula Poké and 98 Food Co.

“The dish has become popular on the west coast of North America and is a new category in Canada that everyone is excited about,” says Cunningham. He notes that demand is driven by “customers seeking new and global flavours with healthy ingredients. All of our fish is Oceanwise, certified sustainable, sauces are made in house, and there are lots of options for vegan or other dietary preferences. All packaging is recyclable or compostable.”

The first Hula Poké location opened in Vancouver in 2017. By the end of 2019, there were 14 locations in British Columbia and Alberta, with four additional franchises slated to open in Western Canada. The concept can be found in street locations, office towers, airports, and shopping malls, in space as small as 300 square feet and up to 1,200 square feet with seating. While the franchise will consider inquiries from Ontario, Cunningham says the main focus for expansion in 2020 remains in B.C. and Alberta.

Hula Poké franchisees are ideally owner-operators with a full-time commitment to the business. 98 Food Co. has been developing and operating franchise concepts since 1998 and has well-developed systems and tools to help franchisees succeed – starting with the right location. “We encourage a location that is high-traffic and visible, with a fair rent,” says Cunningham.

Training begins with two weeks at head office, then on-site before the store’s grand opening. Hula Poké provides ongoing support with store visits and a field team that assists with everything from quality and service check-ins to sales-building initiatives.

“This is not your typical fast food experience – you need to communicate with customers and ‘romance’ the product,” says Cunningham. “We use a lot of grassroots marketing strategies, including social media and serving our product at special events.”

Bryan Burke and Adam Dolley are classically trained chefs with more than 40 years of combined experience. They have worked in, developed, and operated a variety of food concept restaurants over the years. The two friends were on a fishing trip in 2014 and made pierogies one night, then decided to load them with all of the random ingredients in the refrigerator. It was surprisingly good, says Burke. “We felt we were really onto something.”

Fast forward to 2020, and they now own three Loaded Pierogi locations in Toronto, and have franchises in Hamilton, Winnipeg, and Edmonton. They also have visions of Loaded Pierogi standalone QSR and food court locations across Canada.

Rooted in Eastern/Central European culture, a pierogi, says Dolley, “is the essence of comfort food But we put a unique twist on it by loading it with an endless choice of toppings like buffalo chicken, wild mushroom, or crispy fried Brussels sprouts, and a variety of cheeses,” says Dolley.

The franchise offers low entry and start-up costs, easily implemented operating systems, and ongoing training and support from head office. Customer services and restaurant experience are helpful but not required. Rather, says Dolley, the ideal franchisee will follow the Loaded Pierogi system and structure, and understand that producing a quality product in a clean environment with happy, positive staff are the key elements to finding success. “We have operational control systems in place that have been tested by our corporate locations and limit the risk for our franchisees.”

The corporate team assists with finding a location, in-person and online training, marketing, monthly evaluations, and 24-hour support via phone, email, or text. “We have probably already faced any of the issues that may arise in your location,” says Dolley. “You can ask a million questions if you’re unsure about anything.”

Being first to market for a franchised pierogi concept has both benefits and challenges, he adds. “Unlike gourmet burgers, pizza, or pitas, there is little to no competition. But since we are still a young brand, the brand recognition may not be there yet.”

OPA! of Greece is the largest Greek food QSR franchise in Canada. Its 100th store opened in 2019, and this year will bring continued growth in Western Canada and Ontario.

“OPA! pioneered the idea of fresh and healthy meal options in the industry when it was founded 20 years ago,” says CEO Dorrie Karras. “We were a champion of healthy, whole foods before it was trendy, sourcing ingredients from reputable vendors as locally as possible.”

Karras became a franchisee soon after OPA! opened its first store in Calgary in 1998, and owned multiple units before becoming CEO. He still has an ownership stake in three OPA! locations, each co-owned with a former employee. “Although I’m not involved in the daily operations, it helps me keep an ear on the ground,” he says.

The most successful franchisees typically work hands-on in the business, as Karras did when he started out. “They don’t need QSR experience. We look for franchisees who are dedicated, motivated, and willing to put in the hard work needed to see their stores grow and thrive. They are good with people and able to connect with the community in a meaningful and personal way.”

OPA! has maintained its competitive edge by adapting to changing technology, trends, and consumer expectations, says Karras. “We have implemented everything from new electronic POS systems to online ordering, we’ve introduced new menu items, adopted environmentally friendly packaging, and changed direction from being location driven to being franchisee driven.” There is also a shift towards more street front versus mall food court locations, to ensure franchisees have more flexibility in hours of operation and use of third-party delivery services.

Every new franchisee starts with one month of in-depth training delivered by an existing successful franchisee in-store, in conjunction with the corporate training team. When the new franchise is ready to launch, the corporate operational team will be on-site through the first week after opening and conduct regular store visits afterwards. “We don’t take a blanket approach, rather we work hand-in-hand with franchisees to ensure they have whatever support they need to succeed,” says Karras.

Thai Express has been operating in Canada for more than 20 years, and was one of the first QSRs to offer authentic Thai cuisine. “The popularity of the brand quickly spread, resulting in a rapid expansion across Canada,” says Dennis Ng, vice president of Thai Express, MTY Food Group, which acquired Thai Express in 2004. “We have grown to become the largest Thai concept in the world, with over 328 locations, now also found in U.A.E., Bahrain, Qatar, U.K., and the U.S.”

With a proven brand that appeals to consumer who are looking for quick and healthy food, demand continues to grow and there are plans to open close to 30 new locations in 2020. “The franchise is easily translatable to different commercial properties,” says Ng, noting that in addition to storefront locations, Thai Express can be found in food courts at malls, universities, hospitals, airports, and highway rest stop areas. “We are often approached by real estate developers who want to include our concept in their space.”

For new stores, the franchisor’s main concerns are finding the right franchisee and the right commercial environment to be successful. The company has a bank of applicants that are assessed when a new location opportunity arises, to ensure the best fit. The ideal franchisee works hands-on in the business, demonstrates a strong work ethic and leadership skills, and has an entrepreneurial and ‘Thai heart’ mindset, says Ng. The core value of respect – for customers, staff, high-quality ingredients, the processes and practices – is at the root of the Thai Express culture. The brand encourages multi-unit ownership for successful franchisees.

MTY Food Group offers in-depth training that covers all aspects, from food safety and operations to hiring reliable staff. The franchise offers tools and coaching through the corporate team, business development consultants, marketing coordinator, and other resources designed to help franchise owners maximize their performance while being as efficient and profitable as possible.

Publisher’s Message: A Taste for Franchising

The Resilience of Franchising