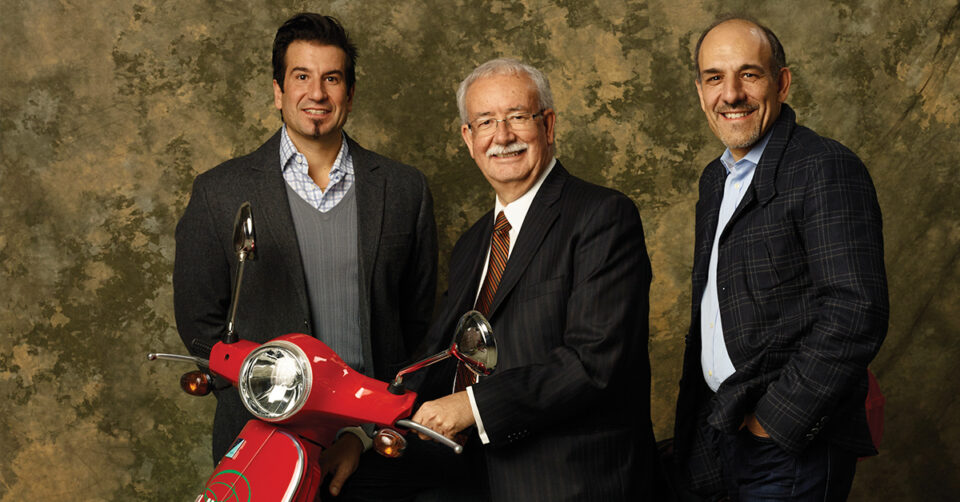 All in the Family

Domenic Primucci was just 14 years old when he started working in his family’s Pizza Nova business, washing dishes in one of its restaurants. Today, as the company’s president, he wears a very different hat, and his hands, for the most part, steer clear of sinks and suds. But he never forgets where it all began.

“As a kid growing up, I always worked in the business, starting right at the bottom, and then I worked my way up to waiting tables, managing the restaurant, working the call centre, marketing, and so on,” says Primucci. “I’ve covered pretty much every gamut of the business – that was my training ground.”

While Pizza Nova may not have the kind of cross-country brand recognition as some franchise brands, in the Greater Toronto Area (GTA) and beyond, it has an almost cult-like status, with a loyal customer base that’s crossed generations. It was, after all, one of the first quality pizza delivery businesses in the city, launching more than 58 years ago when pizza had yet to saturate the marketplace.

The business was started by Primucci’s father, Sam and his three brothers Mike, Vince, and Joe. The siblings felt a pizza business had great potential and was the perfect fit for their Italian family. “My dad and his brothers started the business in 1963. They realized there was an opportunity in Scarborough – you can well imagine that things weren’t as developed then as they are today,” says Primucci. “They started slow, with the mandate of providing a quality product and service, and we’ve kept true to that to this day.”

It was one brother’s passion for race car driving that inadvertently helped get the business off the ground. “Mike, who raced cars as a hobby, came up with the idea, and when he approached his parents for support, they immediately agreed because they figured it would be a safer bet than his racing cars!” says Primucci with a laugh, adding that Mike still managed to squeeze in some race car driving on the weekends.

The brothers – all of whom immigrated to Canada as children – opened their first location in the Toronto suburb of Scarborough, where the business is still headquartered. The original restaurant is still in operation today and remains the only Pizza Nova full-service location. By 1970, Pizza Nova signed on its first franchise.

With time, Sam took over and ran the growing franchise business on his own. His son Domenic joined full-time after completing a business degree and working for a while on his own import-export business. The prospect of strengthening the Pizza Nova brand and taking it to the next level was exciting for someone who already knew the company well. “I was able to bring that special perspective, having worked on the frontlines and throughout the entire organization,” he says. “That gave me a solid understanding of the ins and outs of every position.”

Primucci also had the savvy business sense to understand that growing an already established brand was a delicate balancing act: Pizza Nova had to evolve and respond to market changes while remaining loyal to those attributes that had fuelled its success thus far.

For Primucci, the non-negotiable attributes were abundantly clear: they were the quality products that had been the staple of the company’s popular pizza since day one. “Our foundation has always been the dough, sauce, and cheese, and those had to stay,” he says. “It’s what we’ve done well from the very beginning.”

Pizza Nova also sells a handful of Primucci-branded grocery items imported from Italy. “Our Primucci Homestyle Tomato Sauce isn’t what you find on the grocery store shelves – it’s more like an Italian sauce that grandmothers used to make.”

Primucci has actively steered Pizza Nova into new territory, keeping a keen eye on market shifts and adapting to them as needed. About 15 years ago, for instance, he developed an entirely new brand image. While the decision had few supporters, it proved successful in the end. “It was a bold decision and people were saying, ‘Are you crazy?’ People know these colours and now you want to change?’ And we said ‘yes.’ We had the goal to improve it, and that’s what we did,” explains Primucci.

The company has also diversified its dough and toppings to reflect the increasingly sophisticated palates of the Toronto public. You now have the option of whole-wheat, gluten-free, and even charcoal crust, and toppings include pesto, herbed olive oil, hot Soppressata, and goat cheese. “Thirty years ago, you wouldn’t find the kind of fine food options you can find in Toronto today. We now have opportunities to get better-tasting products and toppings,” says Primucci.

In 2015, Pizza Nova was one of the first pizza companies in the city to introduce pepperoni made from pork and beef raised without antibiotics, followed by other antibiotic-free protein products. It also rolled out a dairy-free alternative to mozzarella a few years back and recently introduced a plant-based pepperoni – aptly called Planteroni – that has met with rave reviews. “We’ve been working on it for the past couple of years and just introduced it in January,” says Primucci. “We wanted to produce a product that was authentic, and it is. We even have fat marbling in the pepperoni just like regular pepperoni.”

“It’s not about chasing trends but recognizing market shifts. If you don’t evolve, then with time you will get left behind. There are many of examples of that, and not only in the restaurant business,” explains Primucci, adding that the company is also rolling out a new app with a loyalty program this summer.

Today, there are 150 Pizza Nova locations spread across the GTA and surrounding region, all within a two-and-a-half-hour drive of the city. The company is looking to add more locations, given the extraordinary growth in population density in Toronto’s downtown core, as well as in satellite cities like Hamilton and Oshawa. Primucci says it has no immediate plans to move outside the province but is not ruling out the idea either. “Never say never, but there are still a lot of opportunities in Southern Ontario that we haven’t covered yet. We’re playing in the largest market in Canada, after all.”

Thanks to a strong demand for meal delivery, the company has been weathering the COVID-19 storm fairly well. There are Pizza Nova locations that have maintained or even grown their business in the past year, while others have taken a strong hit or closed shop completely for the duration, i.e., locations in specialty venues like the Rogers Centre or food courts in malls. “It really depends on the area,” notes Primucci. “The downtown core has been devastated, while our cottage locations have actually benefited because they’re no longer seasonal but doing more business year-round. Overall, we’ve seen a dip in sales since COVID-19 began, so it’s been a tough year. But I count my blessings and knock wood every day that we are open and are deemed essential.”

When looking for new franchisees, Primucci keeps an eye out for people who love the brand, are eager to work for a common goal, committed to the quality of the product, and have a keen business sense. The beauty of the franchise model, he says, is that it gives people the opportunity to become independent business owners with an already well-established brand.

It’s the ideal business model for paying it forward, and that’s what Pizza Nova is all about. “We give people an opportunity to be successful,” explains Primucci. “That’s really why Pizza Nova started franchising when it was still in its infancy. We just wanted to give someone else the opportunity to have their own successful pizza delivery business, and that’s what we continue to do to this day.”

Millennials in Franchising: All the Right Moves