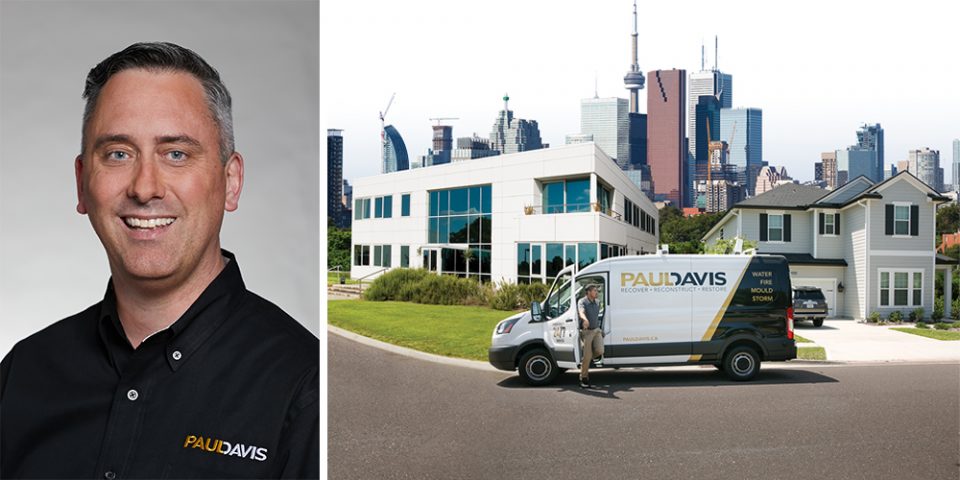 When he got a job working at McDonald’s as a teen, little did Bill Dietz know that it would set in motion a love of business that would one day see him managing a prominent franchise brand for Canada – Paul Davis, a leader in restoration services.

While Dietz couldn’t foretell his future when doing shift work at the ubiquitous burger chain, he understood that he enjoyed earning his own income and seeing firsthand how a successful business was run. When the location switched from corporate to franchise ownership, it also gave him a glimpse into the many benefits of franchising. And he liked what he saw.

“It was definitely more of a family atmosphere,” says Dietz, president of Paul Davis Canada. “While the franchisee wasn’t exactly out in the back cooking, he was more involved. He would come in to help clean and regularly cruise through the drive-thru to ensure it was operating well. There was definitely a cultural shift.”

That made an impression on the teenaged Dietz, who was already considering his future career options and interested in one day owning his own business. While at university, a chance encounter with a fellow student helped turn that dream into reality. The young man he met at a party was already running his own College Pro painting franchise, and Dietz was surprised to learn that he could, too.

“I was amazed there was a company that would teach you to run a business while you were still in university,” says Dietz, who was studying economics and political science at the University of Toronto’s Mississauga campus at the time.

Not long after, Dietz signed on with the franchise brand to launch his own College Pro operation, using his savings to fund the venture. “The start-up capital back then was around $3,000, which I had saved from working at McDonald’s, so I didn’t have to go to my parents for money,” remembers Dietz. “It was a point of pride for me that I wanted to do this on my own.”

Dietz bought a 1984 Ford Ranger for $700, as well as some additional supplies, then got to work setting up and running his new painting business. He hired about six workers in his first year and expanded that to 10 in his second, all while continuing his full-time university studies. Dietz even managed to remain active in sports on the side. It was a tough slog, he says.

“It’s certainly not something I would wish on my kids now!” says Dietz with a chuckle. “When I look back at that first year, it was probably the hardest thing I’ve ever had to do in terms of my career. I was working 20 to 30 hours a week while going to school. I was responsible for all aspects of the business, from recruiting people to submitting my own taxes. It was truly an entrepreneurial endeavour, and I learned how to be a small business person.”

Eventually Dietz decided to expand his learning curve. When an opportunity arose to join the corporate side of the parent company, FirstService Brands, he jumped at the chance. He accepted a general manager position with College Pro Window Cleaning, another of the company’s franchise brands, and gradually went on to work across different brands, primarily on leadership training and helping new franchisees start up their businesses.

It was in 2011, and Dietz was working as a coach and instructor with FirstService’s Leadership Development Program. He was itching to “get back to the operational side of the business” and joined the Paul Davis brand as its director of franchise and field operations in Canada. In 2018, he was appointed president of the company’s Canadian operation.

Named after the eponymous founder who started the business in 1966 in Jacksonville, Florida, Paul Davis Restoration specializes in property damage mitigation, reconstruction, and remodelling. It provides a comprehensive list of restoration services to clean and repair damage caused by floods, fire, storms or other disasters, and works closely with insurance companies.

For Dietz, the move represented a switch to a new, diverse industry that came with an entirely new learning curve. Not one to shy away from change, he embraced the challenge. “I came to the brand with excellent leadership skills, a lot of energy, and without any preconceived notions about the industry – those were all positive things I brought to the table,” notes Dietz. “What was challenging was learning about the industry. It’s a pretty complex industry and I had to learn all the technical aspects and how the insurance side works.”

Paul Davis Restoration was already an established brand in Canada at the time, with a 25-year presence in the country and more than 50 franchises spread across different provinces. Today, it has 58 locations and will grow that number to 62 by the end of the year, says Dietz, with more to follow. “We feel we can have about 75 full-service locations across the country in total,” he explains. “That’s what we would consider to be full capacity and we’re getting close to that. So, 75 is the magic number.”

Most Paul Davis Restoration franchisees service large areas with about 200,000 to 300,000 inhabitants – in some cases, entire cities. “Ours is not like many restaurant franchise concepts, where you can put multiple franchisees into one marketplace,” notes Dietz. “Our insurance carriers usually want one point of contact for a particular marketplace.” Startup capital runs between $250,000 and $350,000, with supporting funds needed to tide franchisees over until payments come through from insurance companies, which can take a few months.

Many Paul Davis franchisees come to the company from the carpet cleaning or construction trade and already have some insight into the work involved. That said, the company provides all the necessary training, while separate training and certification is required for work such as water restoration, fire restoration or applied structural drying. Mould or asbestos removal is normally contracted out, as is mechanical trade work like HVAC or plumbing.

Dietz adds that franchisees need to have good people skills and know how to deal with distraught homeowners facing fairly major losses, be it a flooded basement or burned out home. While Paul Davis does both residential and commercial work (and aims to increase the latter) about 85 per cent of its current business is residential, so franchisees are interacting with people who have a strong attachment to their damaged property. “We deal with very emotional people and take great pride in being there as part of the solution,” says Dietz. “That’s why our franchisees really love this business – they’re often the first people on site and are able to help people get their life back to normal.”

And what does Dietz love about the business? It’s all about working with a great team, he says, and sharing what he’s learned with others to help them succeed, especially in the area of leadership and management development. In particular, Dietz encourages new franchisees to work on their business and not just in their business. “I know that’s a cliché and it gets thrown around a lot, but it holds true,” he says. “We tell our franchisees to keep their eye on the financial and key indicating numbers every day and strive to become the employer of choice in their marketplaces. These are the areas where some of our folks tend to struggle.”

Ultimately, says Dietz, leading, managing, and building a good team is critical to any business, and he is the first to credit his own staff, franchisees, and their workers for the great success of Paul Davis Restoration in Canada. “I love this company and am really proud of the franchisee and corporate team we have,” sums up Dietz. “We genuinely care for our franchisees and want to see them be successful. Because if they’re successful, we’re successful.”

It’s a success story, all around.