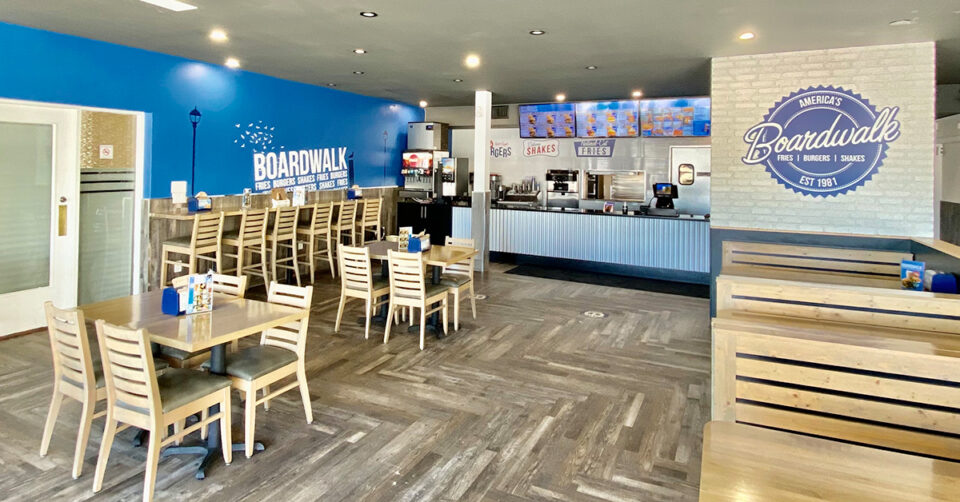 Unless you’re located in Alberta, there’s a good chance you’ve never heard of Boardwalk Fries Burgers Shakes, a premium burger brand with 11 locations across the province. But that’s about to change, and fast, as the franchise eatery braces for explosive growth in other parts of the country, beginning with Ontario. It opened its first location there late last year and aims to have as many as 20 stores up and running by the end of summer 2022.

“A year from now, we should have 15 to 20 locations open in Ontario, which is a huge expansion during this difficult time,” says Audra Wosik, VP of development. “And we’re doing active recruiting in British Columbia, Saskatchewan, Manitoba, and obviously Alberta. You’re going to start seeing Boardwalk all over Canada, and even internationally.”

Expanding at this pace in the country’s most populous province in the middle of a pandemic is no easy task. All the more so when you’re launching into an already crowded burger market. In fact, some would say you need nerves of steel.

That doesn’t faze Wosik. As a franchise professional with an illustrious career spanning almost three decades, she’s honed her skills at some of the country’s—and world’s—leading franchise brands and is certainly up to the task of growing Boardwalk in Canada. She’s also bullishly confident in its success. “A year from now, you won’t be referring to us as a ‘start-up’ in Canada or even a new brand,” she says. “We’re going to be a household name.”

Wosik has the credentials to make this assertion. After graduating with a Bachelor of Arts in labour studies from McMaster University in the mid ‘90s, she started her career in franchising at Jumbo Video, moving on to Denninghouse (owners of the A Buck or Two! brand), and then Neoset, followed by Regis Corporation, which owns dozens of hair salon brands, including First Choice Haircutters.

Wosik then shifted gears to food service, working at Cara as its franchise development manager and then Burger King Canada as its senior director of franchise development and operations. She was also VP of franchising, real estate, and construction at Second Cup, and at one point, ran her own consultancy, advising established brands as well as start-ups just entering the Canadian market.

Joining the Boardwalk team in Canada seemed like a natural progression. While the brand has enjoyed success in the U.S. since it first launched there in 1981, it only made its way to Canada five years ago when two Alberta-based entrepreneurs bought the master franchise rights for Canada as well as the international market. They felt that the premium fresh burgers and fries, tasty shakes, and fun, retro branding had potential north of the border and further afield. They’ve already opened their first international location in Qatar.

With their sights set on further expansion, the owners eventually bought the trademark rights and established another administrative hub in Ontario. They also asked Wosik to join their team to help them expand. The industry veteran saw the brand’s potential and jumped on board. “There were a few things that appealed to me,” she says. “One was that it was a high-quality, fresh not frozen burger brand, and that it had a Halal menu. We’re pretty much the only premium burger place that’s fully Halal. What also makes us different from other burger brands is our low start-up investment for franchisees.”

Franchisees need around $150,000 in unencumbered cash and a net worth of half a million dollars to secure financing, which is substantially lower than the funding required for most major burger chains.

What also impressed Wosik was the investment the owners were making in setting up a separate administrative hub in Ontario in advance of their expansion there. “They built a support team before we even had stores in place,” she notes. “They built the infrastructure, so as soon as the franchisee is signed up, we’re ready to go. That’s a really smart way to do things—invest in the infrastructure so we can have methodical and well-rounded growth in Ontario, and then further east as well.”

Based on the earnings of the company’s first store in the province, things are looking promising for Boardwalk. The Scarborough, Ontario location opened just as the COVID-19 pandemic began in March 2020, right before provincial restrictions began to tighten. Yet despite this inauspicious start, and being closed for in-store dining for seven months of the year, it still managed to meet its projected earnings with its mostly take-out and delivery business.

For its part, Boardwalk rallied to help its franchisees on several fronts—from bumping up its online social media advertising to enhancing its take-out and delivery processes. The franchisor helped secure better deals with third-party delivery providers, reducing percentages paid out to them, and arranged dedicated pick-up parking spaces in front of their locations for ease of service. “Before the pandemic, 70 per cent of our business was dine in. Now, we had to shift and go the other way,” says Wosik. “We had to explore other avenues.”

The company also negotiated rent deferrals with landlords and guided franchisees through complex government subsidies and rent support programs. For new franchisees, they’ve started adding pandemic-related clauses to their lease contracts, protecting them in the event of another COVID-19 lockdown. Wosik points out that these supports add up to important advantages for franchisees over independent business owners. “Having a corporate office behind you to help guide you through programs and help you with your supplier, landlord, and third-party partners is key to a lot of the success that franchisees have had through the pandemic,” she says.

As for her own success, Wosik credits her ability to build relationships with those around her. Franchising, she points out, “is not about managing down, it’s about managing with franchisees. It’s about convincing, not telling, and getting franchisees to understand why they should do something.”

As a successful woman with years of experience working at the executive level in franchising, Wosik is somewhat of an inspiration to females entering the industry. And while women may still be underrepresented in franchising, both at the executive level and as franchisees, this is changing, she says. Women are increasingly holding positions in real estate or construction, as opposed to their more traditional marketing roles, and signing on as franchisees in once male-oriented businesses.

“Women need to explore more non-traditional franchise opportunities because they can be very lucrative and they can enjoy them, and I think we’re getting there,” says Wosik, who also sits on the Canadian Franchise Association’s Women in Franchising Committee. “There are also far more programs aimed at helping women start a business at banks or through the Canadian Federation of Independent Business, which is fantastic.”

When it comes to advice for franchisees, male or female, Wosik points to her number one tip: stay actively involved in your business. “Franchisees need to be active owner-operators in their business—that’s imperative,” she says. “People will buy a $100,000 sports car and won’t let anybody touch it, but they buy a million-dollar business and never go there. It makes no sense. They have to be there, and they also have to be very active in their community. Your business is going to be successful by the four to five kilometres around your location.”

If you’re lucky enough to be in proximity to a Boardwalk franchise, you should pop by for a bite. If you’re not, wait a bit. Given the rapid expansion of this promising brand, and the strong talent behind it, there’s a good chance you will be soon.