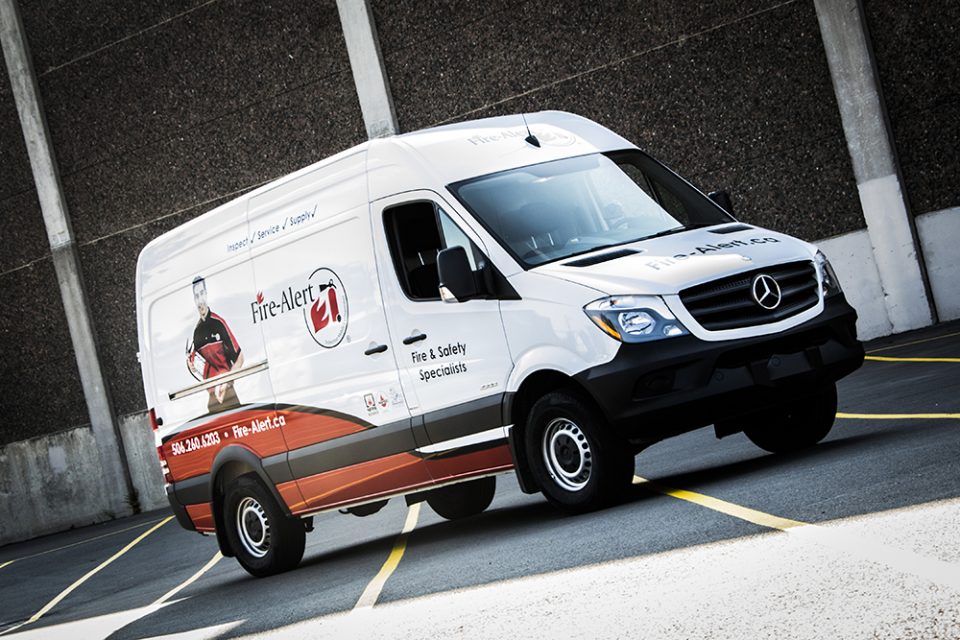 Yvan Houle first saw the potential of the concept more than 15 years ago, when he was introduced to its founder who was looking to sell his then small, one-man operation. The original owner had launched Fire-Alert in 1984 to serve the Ottawa region and was retiring. Yvan felt he could grow the business into something larger, with a more expansive footprint. It was, as he says, love at first sight: “I loved it and immediately saw the value in this type of business.”

In 2003 Yvan bought the company for $50,000, and within two years quadrupled his sales. In 2009, with two field technicians and an administrator on the payroll, he set his sights on franchising. “At the beginning, Fire-Alert was more or less a good business opportunity – it helped put my son and daughter through university,” says Yvan. “But I’ve always had a passion for franchising, and when I saw the direction the business was taking, I thought it could be a good business opportunity for others as well. That’s why I decided to franchise.”

By no means was Yvan a stranger to the franchise system – or to running his own business. Early on in his career, he had owned and operated two restaurant fran- chises in North Bay, Ontario: a local, diner-style concept called Colonel Hoagies. Later, he managed two Shell ser- vice stations for a stretch. (Some of his current franchi- sees are also former Shell operators who were embraced into the Fire-Alert fold.) Yvan understood very well what was involved in running a successful business and the long hours and steady dedication that was required. But he was undaunted: he knew he wanted to be his own boss.

To the untrained eye, Fire-Alert may have looked like a modest enterprise with few prospects for sizeable growth as a national franchise chain. But Yvan knew there were many built-in competitive advantages in his novel fire-protection concept, and with time he could make it happen.

These advantages included the convenience of being able to test and service the equipment onsite, an added bonus to both clients and franchisees. “What sets us apart is that we’re mobile, so we can service first extin-guishers onsite at our clients’ convenience,” explains Yvan’s son Sylvain, co-owner and director of franchise development. “There aren’t many businesses in this field that offer mobile services. Ours is a workshop on wheels, and I believe we’re the only franchised business that does this. We stick out like a sore thumb when we attend a franchise show.”

“We have all the latest high-tech equipment in our vans,” continues the younger Houle, who started work-ing for the company while at university and came on full-time shortly after graduating, when it was beginning to franchise. “We didn’t revolutionize the equipment, but we certainly put our twist on it. We were able to engi-neer a functional working space and multiple interior sta-tions: we can conduct hydro tests, we have a recharge station, workbench, shelving for inventory, etc. It’s the unique layout of the outfit that we brought to the table and building the vans ourselves really allows us to maxi-mize every square inch of the workspace.”

An additional advantage to the Fire-Alert model, adds Sylvain, is that by law all commercial and industrial busi-nesses in Canada must undergo fire safety inspections, so the company provides an essential service within that market. Unlike larger, comprehensive fire protec-tion firms, however, Fire-Alert does not inspect sprinkler systems or smoke alarms. Instead, they specialize in fire

extinguishers, fire hoses and emergency lights: that’s their niche. They service residential homes as well, but it comprises a small part of their business.

The company’s two-week training program for franchisees – held at their 12,000-square-foot training facility in Ottawa – provides the required skill-set. This includes the certification that franchisees and their technicians need to perform inspections and service products. In some jurisdictions, like Alberta, additional training by a third-party is mandated by the province but can be completed in a short time frame.

The company currently has 23 franchise branches of varying sizes spread out across five provinces: New Brunswick, Quebec, Ontario, Saskatchewan and Alberta. Some franchisees have expanded their operation into a multi-van business, adding technicians and renting out shop space, while others choose to run it as an owner-operator home-based business. “That way the overhead costs are low,” says Sylvain. “And for the most part it’s a 9-5 job, so it’s quite flexible.”

Franchisees are a mixed bag of professionals, many of whom bought into the franchise as a second career move, including former firefighters. Qualities Sylvain looks for are the usual mix of passion and industriousness, but also “strong family values,” he stresses. “We’re a very family-oriented company and developing good relationships with our franchisees is important. We expect the same from them, the same level of respect.”

Sylvain touts the concept as a “typical boy brand,” attracting people who enjoy hands-on tasks. To date, this has been men, but that’s been by chance and not design. In fact, Sylvain says the company wants to add women to their family of franchisees and encourages anyone interested to apply.

Outside of the inspection/maintenance work, franchisees are responsible for generating much of their local business, while the Fire-Alert head-office handles the national accounts. This includes large retail chains, petroleum firms and property maintenance companies, as well as other businesses with locations nationwide. Because these accounts comprise a fair portion of the company’s business, new franchisees have a leg-up when they join. “We already have national clients for our franchisees, which eases some of their challenges in starting a new business,” says Sylvain. “When our franchisees sign on with us, we provide them with a client base to start, so they’re trained and able to hit the ground running from day one.”

Having a national spread also allows Fire-Alert to develop beneficial relations with other fire protection providers. Larger firms often subcontract them for some of their fire extinguisher work and, conversely, Fire-Alert contracts out its inspections in regions where they have no franchise presence to date. This includes British Columbia, where they are actively searching for franchisees in order to penetrate the west coast market.

As the company grows, both Sylvain and his father Yvan continue to enjoy the journey. Seeing Fire-Alert evolve from a small, one-man operation into a large, national franchise chain has been deeply gratifying on both a personal and professional level, they say. All the more so because it was together that they played a key role in that transformation.

Most fulfilling for the father-and-son team, however, has been watching their extended family of franchisees thrive and prosper. Whether linked by blood or through work, to them it will always be a family affair, and the journey is far from over.

A Day in the Life: The Fine Print