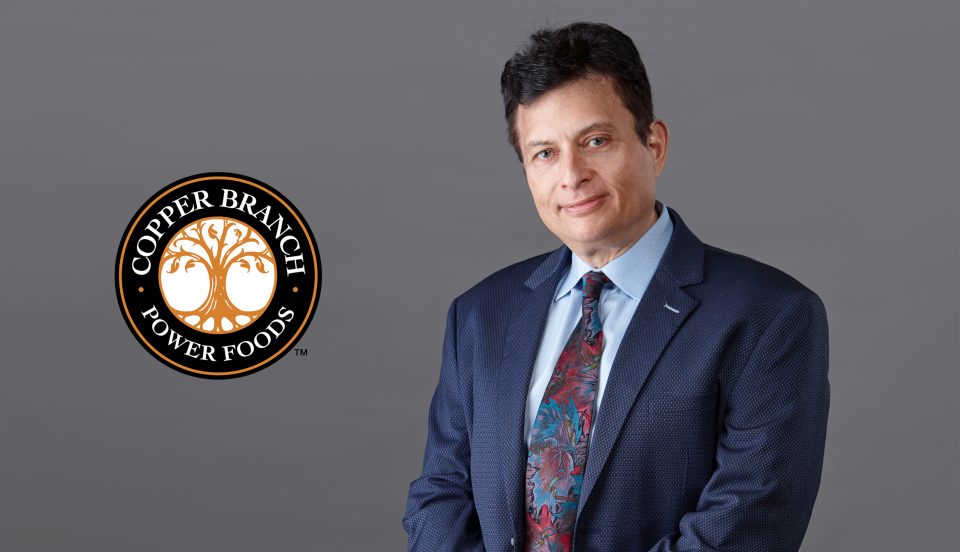 What happens when a serial entrepreneur has a mid-life ‘aha’ moment on the merits of healthy eating and lifestyle? If you’re Rio Infantino, that moment’s end result is the launch of Copper Branch, a fast-casual dining con­cept offering tasty plant-based dishes as a healthy alter­native to your typical fast food fare.

“I decided I wanted to create something that was going to benefit people, and I wanted to make it affordable and acceptable,” says Infantino, the company’s founder and CEO, and a long-time entrepreneur with a host of suc­cessful businesses behind him.

Prior to starting up Copper Branch, Infantino owned and operated multiple Subway franchises – 16 at one point. He was at the top of his game and all was going according to plan, at least professionally. On the personal side though, he let his health and general well-being slide. One day he found himself tipping the scales at 300 pounds and that’s when he had his lightbulb moment.

Infantino realized he had to invest in a healthier life­style, and given his keen eye for business, he extended that investment into his professional life as well. “I decided to create a healthy restaurant chain that’s plant-based – something that would ultimately improve people’s lives,” says Infantino, who started selling his Subway franchises and setting the groundwork for Copper Branch, a concept that embraces natural, vegan eating.

The brand’s menu reflects this. There are super bowls filled with eggplant, chickpeas and goji berries, four different veggie burgers, oven-baked fries and nachos, and the company’s own twist on a Montreal classic: a lip-smacking poutine with a creamy cremini mushroom sauce. For dessert you’ve got chocolate zucchini brown­ies, and the coffee is – as expected – fair trade. “There’s plenty of texture and plenty of flavour,” boasts Infantino, who swears his Copper Branch veggie burger can give any meat burger a run for its money.

Not everyone looking to lose a few pounds decides to start a new restaurant brand – most people battling a mid-life bulge are happy with a new gym membership and cutting out carbs. But Infantino is not most people. The diehard go-getter started his first business – a janitorial service – at just 17 and grew it into a 12-employee venture. By the time he reached his 20s, he had launched a dry-cleaning business with just $6,000 in capital, expanding it into multiple locations and later selling it for “about 25 times more.” There was also a TV repair business along the way.

How exactly does someone so young develop the acumen and wherewithal to start not one, but multiple profitable businesses? For Infantino, it was surprisingly simple. “I read a book called ‘Starting a Business on a Shoestring’ and pretty much followed all the advice it gave,” he says.

During a lull in his enterprising activities, a job oppor­tunity opened up at a local McDonald’s and Infantino jumped at the chance to learn more about running a business from a franchise behemoth. While he had stud­ied business at Montreal’s Concordia University, he knew a brilliant learning opportunity when he saw one, and for just under two years worked as a McDonald’s first assistant manager. “I thought it would be an amazing learning experience, and it was,” he says. “The training is extensive and I would recommend it to anyone wanting to learn about systems, teambuilding and operations.”

That experience primed Infantino for his 20-year stretch as a multiple-unit Subway franchisee. He bought his first location when the brand was just starting out in Canada and grew his business to 16 units in the first seven years.

Yet despite his obvious success, Infantino’s expanding waistline and budding interest in healthier living, com­bined with his strong entrepreneurial spirit and what he viewed as a saturated market, eventually pushed him to set his sights on something new. He wanted to launch his own, healthier, franchise brand. “It was a combina­tion of reasons,” says Infantino of his decision to wade into fairly risky new territory. “It was definitely my entre­preneurial spirit – I had my own vision and an ability to drive a company. But I also wanted to do something that I truly believed in.”

Pumping $2-million of his own money into his new under­taking, Infantino got the ball rolling by conducting exten­sive market research and working closely with consul­tants to develop a viable concept. He also brought at least one family member into the fold – his son Andrew designed the Copper Branch website and now works as the company’s marketing director.

Menu development was key and posed the big­gest challenge. Initial dishes created for the budding vegan business were all scrapped – at a cost of around $30,000. As delicious as they were, it was soon appar­ent they wouldn’t work in a quick-service model where everything had to be prepared by people with limited food experience. Daunted but not deterred, Infan­tino changed course and spearheaded the diverse yet doable menu on offer today.

The first corporate Copper Branch location opened in 2014 and the company started franchising the following year. There are now 26 stores in Quebec, Ontario and Alberta – all franchised – and the company has whirl­wind plans to expand into other provinces and beyond. The goal is to have 40 locations by the end of the year and to actively branch into the U.S., where they just sold their first location in Maine. They are also eyeing France, Belgium, Luxembourg, Monaco and the Netherlands to gain a foothold in the European market. The overarching goal is to grow to 2,000 units over the next nine years.

Infantino is obviously not one to do anything in half-measures, and he believes wholeheartedly (no pun intended!) in the burgeoning demand for healthier, ethically-sourced food. “People are looking for some­thing revolutionary, so there’s definitely space for Cop­per Branch in the marketplace,” he says. “Our menu and branding target the mainstream consumer who wants to live more healthily and have accessible, tasty, quality food, and that’s a big market.”

Copper Branch franchisees tend to be keen believ­ers as well: most are people who want to both run their own business and who see healthier eating habits as the way of the future. They include a varied mix of profes­sionals – doctors and engineers among them – who all bring their enthusiasm for healthy eating to the table. As Andrew Infantino notes: “We have quite an educated bunch and they all basically want to do something differ­ent. They have a passion for running a plant-based busi­ness and for the plant-based movement.”

That passion recently led the company to team up with the Rain Forest Trust to run a loyalty program steering a percentage of sales into rainforest land mass purchases. In just eight short weeks the company has already bought and saved 700 acres of rainforest.

Initiatives like this give Rio Infantino his biggest buzz as he goes about building his newest business venture. What he enjoys most is helping people, and by exten­sion, helping the planet. For this diehard businessman, it’s no longer all about making money. It’s about doing something far greater than that. “I love knowing that every day we’re making people’s lives better, that every day we’re helping the planet and that every day we’re saving a lot of animals by delivering plant-based offer­ings,” he says. “McDonald’s has their ‘Billions Served’ slogan; well one day we’re going to have our ‘Billions Saved’ slogan.”

It’s a lofty, benevolent and highly ambitious goal, but one that clearly taps into the zeitgeist of the time. If anyone can turn a vegan concept into a powerful, mainstream brand, it’s Infantino. After all, he had an exceptionally early start in business, and he’s still going strong.

Publisher’s Message: Keeping Up with The Trends