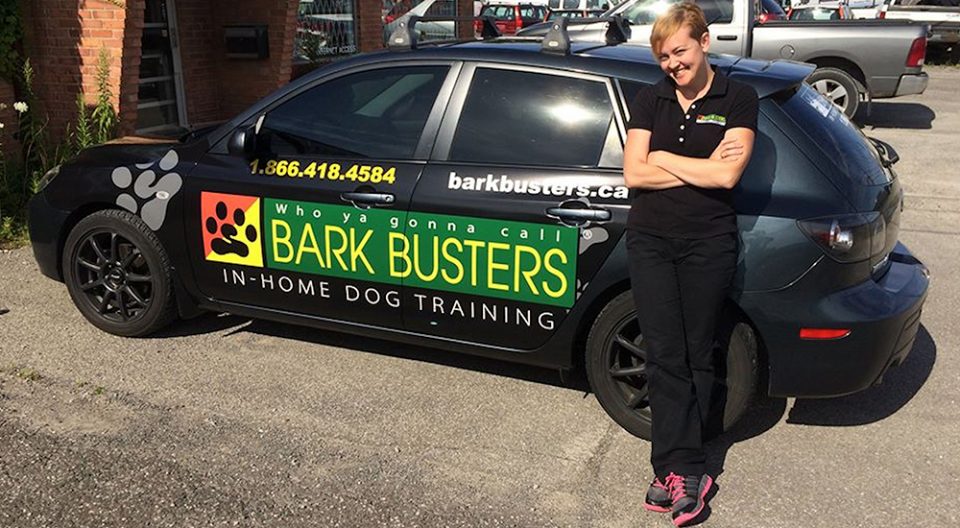 Like many franchisees, Michelle Bailey came to in-home dog training franchise Bark Busters first as a customer. In 2011, she and her husband had adopted a rescue dog named Major with worrisome aggression issues, a problem made even more dire by the fact that Bailey was pregnant with their daughter. The situation escalated to where the dog was fighting with dogs and people, and even bit another dog to the point where they had to pay a stiff vet bill. They went looking for a solution, and found Bark Busters.

“Within the first two hours of the lesson, it really changed our lives, gave us the mindset, tools, and approach to get the dog under control. I always tell my clients in the years that have followed that of the nearly 1,000 dogs I’ve trained at this point, he’s still one of the worst I had ever seen,” says Bailey.

The best part was the peace of mind that Bailey regained. “By the time my daughter was born, the dog was the least of my worries,” she recalls.

That accomplishment was something Bailey kept in mind as she returned to work in the theatre world as a costume designer, head of wardrobe at a mid-sized theatre company in Toronto. While she found her work engaging, it was getting challenging to balance family life. “I was just finding I was working all the time for not nearly enough money. And if I was going to be working that hard, I’d rather it be for myself,” says Bailey. The thought brought her full circle back to Bark Busters.

Good timing also played a role, as the franchise territory owner for Hamilton-Niagara was looking to move on from the business. On both sides, there was a lot of back and forth with head office. “You need to be the right kind of person because you’re not only dealing with dogs, but you’re going into people’s homes,” says Bailey, who was also assessing on her end. “I really liked what Bark Busters showed me, that they’re a very supportive company to work for.” With that, Bailey decided to buy in. The typical investment for the franchise fee and training fee is $48,000 (royalties fees are 11 per cent and the national marketing fund is two per cent).

Initial training included a 23-day intensive program in Squamish, British Columbia with the franchise’s head trainer, a regimen that includes textbook learning on dog psychology, lots of hands-on work with dogs, and actually doing full lessons with real clients under the close supervision of the head trainer. Follow-up support includes a monthly conference call where franchisees compare notes and share stories. Every 24 months, the franchise holds an international conference, which took place this past September in Australia for Bark Busters’ 30-year anniversary.

Bailey says there’s no one specific training method but that the approach is tailored towards the individual dogs and family. “You learn how to speak the language of the dog. Dogs communicate in body language and a series of growls and snaps and barks. We learn to take that information and translate it into human,” she explains. Typical training might include role-playing scenarios; for instance, working on the problem of a dog that barks and jumps on visitors might involve practicing that interaction. After initial training, it’s the pet parent’s responsibility to keep practicing, with notes from and occasional check-ins by Bailey (and lots of email follow-ups).

Settling into a routine

Now a few years into life as a franchisee, Bailey says that her daily routine tends to vary depending on the time of year. People pay a one-time lifetime flat fee between $600 and $900 for the dog training service, which covers as many visits as needed for the life of the dog. Since the first lesson is longer, ranging from two to three hours, Bailey tries not to book more than two new lessons in a day, and then schedules follow-up revisits for owners who need extra help.

“Today I had a lesson in the morning, which took me from about 10:00 a.m. to 1:00 p.m. And then I will typically come home to answer emails or talk on the phone and then in the next hour or two, I have another recall, and then I have another lesson in the evening,” explains Bailey, adding that each franchisee structures their time a little bit differently. Evening work is also expected at times, as it’s convenient for owners.

In terms of finding clients, Bailey says she’s very active on social media. She runs her own Facebook page, and advertises on Google, Facebook, and Instagram. She often shares success stories where, with an owner’s permission, she posts photos of a dog before-and-after story. In addition to online marketing, Bailey has also developed relationships with local veterinary offices, dropping off brochures and chatting with staff.

As her reputation grows, so does the word of mouth and referrals. “There’s almost entire neighbourhoods in Hamilton where there’s a dog on every corner where we’ve been to their houses,” says Bailey, adding that there is no shortage of dogs whose behaviour could use a little tweaking.

In terms of challenges, Bailey says the biggest are with owners. “The toughest challenges are keeping people motivated to carry out the instructions. I’ve done this as a client myself; it can be easy to fall back into old habits, but that’s not how this works,” says Bailey. She’s quick to add, though, that humans are also one of the best aspects of the business.

“When I took over from the previous trainer, one of the last things she said to me was ‘you’re going to meet some really great people.’ She was right!” says Bailey, noting that the rewards only increase when the stakes are high. “It feels really good to go into a situation when I am that dog’s last hope. I’ve had people in tears of joy to see that there’s hope here. That is the most rewarding.”

While Bailey came from a theatre background, she’s been a lifelong dog owner and says at least having owned dogs or volunteered with them in the past can be helpful as background. Loads of patience is required too, for humans as well as dogs. “A fellow trainer told me, if you’re just in it for the dogs then be a dog walker, because dogs are 10 per cent of it. I’m more of a human trainer, training people to train their dog,” she says.

She adds that being friendly helps. “Being a good people person really helps because if you’re unpleasant, it doesn’t matter how good you are with the dogs, people aren’t going to want to have you in their houses.”

Clearly Bailey herself checks all of those boxes, because even though she’s only been with the franchise for five years, she’s already been recognized twice as Bark Busters’ top franchisee and also won the founder’s award. She says she’s pleased with how far she’s come as a franchisee, and especially the work-life balance she’s gained.

“The business lets me plan my life. As busy as I am, I’m busy when I want to be busy. I’m able to spend time with my family, I’m always able to plan a vacation. The whole point was to spend more time with my daughter. I like being home with her while she’s still young.”