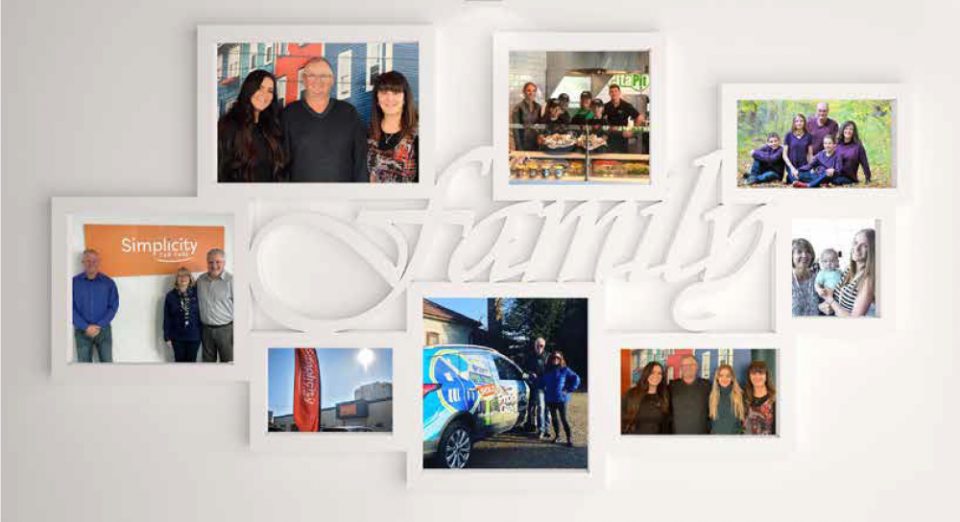 As the old saying goes, business and family don’t mix. But many Canadians clearly disagree. A recent report from the Conference Board of Canada and the Family Enterprise Xchange Foundation found that family businesses generated almost half of Canada’s private sector GDP and almost seven million jobs in 2017. So what are the keys to successfully mixing business and family? We asked four family franchisee teams to tell us.

Working with family was nothing new for Michelle Maher when she and her husband Larry bought their first Mary Brown’s location in St. John’s, Newfoundland & Labrador in 1994. She once operated her family’s Pizza Delight franchise and was later the sales supervisor of another family business, Avalon Bakery. Still, becoming a franchisee with your husband is a whole new challenge, especially when you’ve just had a child.

When Michelle and Larry bought that first Mary Brown’s location, their daughter Caitlin was only six months old. “My husband and I worked opposite shifts so one of us could be at home with her. Quite often we brought her in the office at the store while we worked through the busy times, which wasn’t ideal, but we made it work.”

They made it work again three years later, when they purchased a second Mary’s Brown location four days after they had their second child, Melanie.

So how did they make it all work? For one, with clearly defined roles. “I assumed the administrative, customer service, and human resources side of the business while his primary role was operations and quality control,” says Michelle. Twenty-five years and two more locations later, they still operate the same way, she adds, though having a solid management team in place and having Caitlin taking on a more active role has also helped Michelle and Larry better balance their professional and personal lives.

It’s not surprising, then, that one of Michelle’s pieces of advice for others going into business with their spouse is to not do it alone. “It took us several years to trust other staff members to take on more responsibility in the business, but in doing so we developed mutual respect and appreciation for our staff, all while gaining some much-needed family time for ourselves.”

A few years ago, Nathan Douglas was sitting in Phoenix, Arizona when he turned to his dad Randy and told him they should open a Pita Pit, one of their favourite restaurants, in their hometown of Winnipeg, Manitoba. “There’s none in our area,” he said, “and if we don’t do it, somebody else will.”

And so they did, launching their first Pita Pit in Winnipeg in March 2017 and including brother Carson, sister-in-law Adrienne, and mom Sandy. They opened their second Pita Pit in Steinbach last July, and brother Lukas joined the family team of franchisees.

That’s a lot of the same blood in one business, and Nathan says it can be tough to balance personal and work relationships with so many involved. “That’s the risk you run being with family, because sometimes things that should be looked at objectively don’t get looked at objectively and that’s a hoop you have to jump through.”

If it works, and if they’re good people, the main benefits of working with family is that you can trust them and that you know you can pivot if need be, says Nathan. “One thing I always talk about with my family is that we know if this doesn’t work out, we’ll be able to do something else together because we’ve established that we can work together as a unit.”

Based in Woodstock, Ontario, Kim and Brad Swanson have been PropertyGuys.com franchisees since the summer of 2017, and looking back, the husband-and-wife team know they made the right choice with North America’s largest private sale real estate network. Not only are the company and its franchisees “extremely supportive” and “like a family,” they say, but the business allows them to complement each other’s skills.

“For Brad, it’s the technical piece – things like photos, the website, breaking down data, putting up signs,” says Kim. “For me, it’s the customer-service part and the empathy piece of helping people through these big decisions.”

That doesn’t mean there aren’t challenges, of course, but the support they get from the company is huge in helping them overcome anything, as is the support they give each other. “We absolutely motivate each other,” says Kim. “No matter what’s happening personally, when we’re with clients at the table, we’re very supportive of one another, respectful, and fun.”

As for any guidance they’d give to others going into business with family, they say not only is it important to have clearly defined roles, but it’s crucial to keep each other accountable to those roles. “When you’re both accountable, you tend to follow through with things and complete tasks,” says Brad.

Kim agrees, adding that you have to make sure you’re taking time for yourself because it’s hard to balance being a parent and spouse while also running a business.

It’s all worth it, though, she says. “We can empower other people through this business, and as a mom, I’d say the greatest thing that we’re doing is showing our children that we can work together and what it looks like to be a team.”

Morris and Debbie Lawson have been married for 44 years, and for 43 of them they’ve worked side by side in their auto shop in Hamilton, Ontario. Last year they joined the Simplicity Car Care group, a collision repair company that began franchising in 2017 and now has more than 30 locations in Canada.

So what’s been their secret to working successfully together for so long? Keeping work at work, says Morris. “We have never ever carried a day’s work home with us. When we go home, I don’t want to talk about business, nor does Deb. We can have a difficult day at the shop, but we don’t have that difficult day turn into a difficult one at home.”

They also credit their faith in God, their strong relationship, and the trust they have in each other and other family members who have worked in the business, such as Morris’s cousin Scott Elliott. “The thing with family is that you can usually always trust family members,” says Morris. “When we take off for a holiday or whatever, Scott is here full time those days and we don’t even think twice about it because it’s a family member; he knows us, we know him.”

The advice Debbie would have for anyone thinking of going into business with family is to keep clear lines between your work and home lives. “You have to have two separate entities and remember that your relationship with your family member is the most important thing.”

For Morris, it’s to take a long look at your relationship ahead of time. “You have to know the strength of your relationship. If you argue and squabble at home, you probably shouldn’t go into business together.”