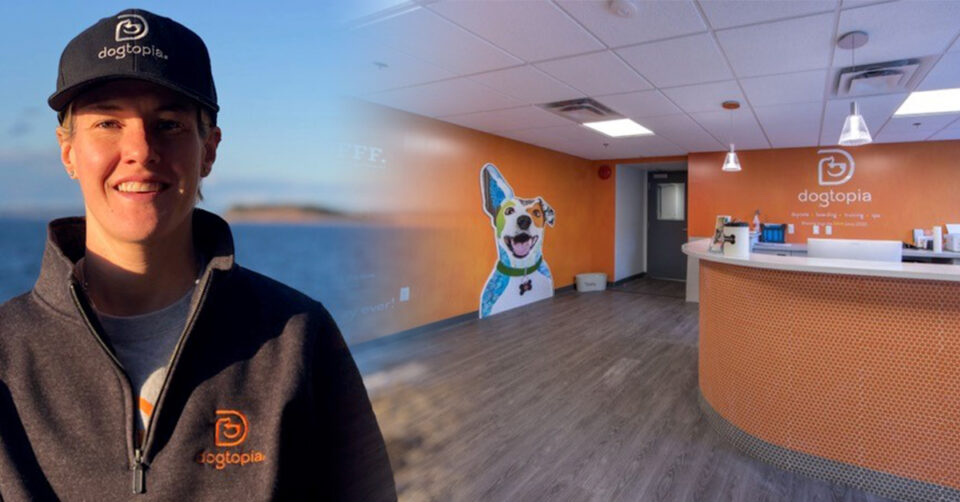 Dogtopia is the place where dogs come to play, be trained, have a spa day, or spend the night while their pet parents are away. It’s the ultimate playground for dogs, built and maintained by humans with a love for furry friends.

The dog daycare was established in 2002 and today has more than 160 locations across Canada and the U.S., making it the largest provider of dog daycare services in North America. Since Dogtopia’s main clientele is canine friends, it’s sure to attract franchise owners within younger demographics who are looking for a unique business opportunity with a touch of fun.

Jen McCain is a 31-year-old multi-unit franchisee with Dogtopia, operating three locations in Toronto and Newmarket, Ontario as well as Halifax, Nova Scotia. Her locations were opened throughout 2017 to 2019, and as a New Brunswick native living in Ontario, she says she’d always aimed to return to Eastern Canada in some capacity. “Part of the fun in owning a franchise is bringing the concept to new markets—and [the Halifax location] effectively unlocked Dogtopia as a coast to coast operator—which is a great story to be part of,” she notes.

Em-bark-ing on a new journey

McCain joined the Dogtopia team with a business management degree and an MBA, as well as experience in the field of business. But she says, “I never thought I’d be a ‘franchisee,’ per se, but I was pulled towards the franchise model, because Dogtopia was—and I believe still is—the best business model in the dog space.”

Dogtopia offers services for dogs including daycare, boarding, grooming, training, and a spa. McCain adds, “It’s a suite of services for pet parents who will do anything for their dog. We’re not the lowest cost player in the market, and there’s a reason for that. Dogtopia dogs live differently. That’s what makes Dogtopia unique.”

McCain says she went into franchising with the intention of becoming a multi-unit operator and designed the operational structure of her businesses with that end in mind. “I have three big principles called the ABC’s: Accountability, Balance, and Communication,” she explains. “In short, accountability speaks to the team running the business like they own it. Balance is the delicate equilibrium of breaking down ownership and management roles, as well as prioritizing activities. Communication is the cornerstone of operating a business.”

With the pet care industry adapting and changing frequently, it’s important that Dogtopia keeps its franchise owners trained and educated in the business. McCain explains that the franchise provides excellent support and resources including frequent town halls, a valuable online database, proprietary systems, and best in class technology. She adds, “My team does an excellent job at keeping me informed and highlighting where we need to brush up on our skills or invest in further learning and development.”

Noting that “Dogtopia’s brand equity is one of its greatest assets,” McCain points to the franchise support and network as key to her business success. “The best part about the franchise network is knowing there are others in a similar position to you, working towards a similar goal. Not just another small business, like yours, but another franchisee with very similar variables. While circumstances vary from location to location, we all want the brand to grow and be recognized as the leader in our industry.”

She adds that the benefits of franchising with Dogtopia include system support in processes, operational best practices, playbooks, tools, resources, subject matter expertise, talent, and especially the scale and reach of the brand. Nearly anything a franchise owner encounters will likely have occurred previously at another location within the brand. “The collective network is greater than the sum of the stores.”

As for the challenges of being a franchisee, McCain says that “Being an entrepreneur can be isolating. When you run a business, you’re often in your own company, a lot. A franchise network allows you to be both entrepreneurial and intrapreneurial. A franchise is like a puzzle—you put it all together and it fits just right.”

Fortunately for McCain, her three franchises were up and running well before COVID-19 arrived in 2020, though she notes that the pandemic has still “been the single greatest test for many business professionals’ careers to date.”

Dogtopia responded to the pandemic by putting the health and safety of its clients—both humans and dogs—first. “We pivoted to curbside services and leveraged technology to reduce face-to-face interaction,” explains McCain. “We created video and multimedia collateral to replicate in person tours. Dogtopia by design has very high sanitation and cleaning protocols, and low human-to-human interaction, so we doubled downed on our existing processes. We really leveraged technology for our customers, and within our teams.”

She adds that opening a new business is a challenge in itself with start-up pains and a steep learning curve, but layering in pandemic restrictions and pressure to maintain revenue was quite difficult. “There were days when I’d want to call it all off. But providing a space of meaningful employment and a safe community where dogs can be their best selves kept me going.”

As a young business owner, McCain says that she tries to remind herself that age is just a number. She recognizes that some stakeholders do take her age into consideration, however, she was born into a business family and has never known anything but the corporate lifestyle, so she’s built up plentiful business experience, which is more important than how many years she’s spent orbiting the sun.

“I’ve been praised for accomplishing what I have at my age, but also pushed around,” says McCain.
“The first time someone makes that mistake is generally the last time.”

On top of being a millennial, McCain is also a female business owner within the predominately male-oriented franchising industry. But she says that she tries not to think about gender in business, while still recognizing that there are moments when being a woman factors into how she’s perceived or treated. Fortunately, the word “franchisee” is gender neutral, so she says she only registers gender when wearing the label as a “female business owner” works to the advantage of inclusion and diversity within the franchising community.

With her success as a millennial multi-unit franchisee, McCain offers her own advice to other young entrepreneurs looking to dip their paws into franchising. “Do your research and be prepared to be a collaborator. A franchise is a long-term relationship—at least it’s intended to be. Being, or becoming, a franchisee is a journey and there are very predictable milestones along the way. Franchisees will go through different states of mind. Try and anticipate those.”

She adds that it’s important to recognize that there are things you can and can’t do as a franchisee since you’re effectively a brand ambassador with parameters to adhere to from the franchisor. “Develop your own team—you’re only as good as your team is.” And if you’re considering joining the Dogtopia franchise, a love for pups sure will help.

Millennials in Franchising: Opportunity in Delay