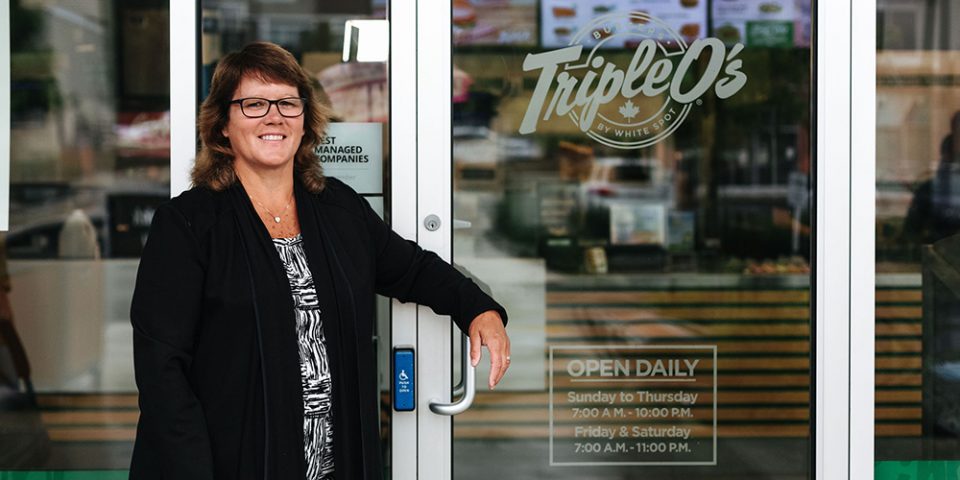 No two days are alike for award-winning Triple O’s franchisee Teresa Troock. Some days, she’s up early at her Surrey, British Columbia restaurant helping employees serve guests. Other days, she’s doing everything from setting big business goals to researching market trends to ensuring that her restaurant is running smoothly.

But if you asked Troock what she thought a future typical day would look like when she first started working in the hospitality industry, it would be completely different. Back then, she worked as a manager for McDonald’s. “I started working at McDonald’s part time when I was 15, but when I graduated, I wasn’t sure what to do.” She decided to take advantage of what the franchise had to offer, working her way up from crew member to assistant manager to manager.

And she didn’t stop there. “I learned profit and loss and enrolled in management development courses that covered basic operations, intermediate operations, and advanced operations,” explains Troock.

For several years, she excelled as a manager for McDonald’s. Then one of her friends, a Chevron gas station and Triple O’s retailer, suggested she too look into operating a Chevron and Triple O’s location. That was when everything got infinitely better for Troock.

Troock loved the partnership she had with two iconic British Columbia brands; Triple O’s and Chevron. When her contract with Chevron ended, it was time to think about the next chapter. Troock immediately inquired about franchise opportunities. She believed in the Triple O’s brand, the company values of involvement, innovation, and integrity, and she was confident in her ability to run a quick service restaurant. “Let’s face it, I have ketchup in my blood!” she says.

So in 2016, Troock, with the support of her husband Dale, officially became a franchise partner of her own Triple O’s restaurant. Triple O’s, launched in 1997 by British Columbia’s White Spot brand, is a premium quick service restaurant concept, known for its premium burgers, fresh-cut fries, hand-scooped milkshakes, and secret Triple “O” sauce.

Troock remembers it as one of the best days of her life. “My husband and I were at the home office signing the franchise agreement, but little did we know that all the staff at the office were gathering together. When we left the room, the president of White Spot rang a bell and introduced us to the group as the newest Triple O’s franchisees,” says Troock.

“I had to try and hold back tears. It was such an amazing feeling. I’ve never had anyone recognize me in that way. I truly felt on top of the world.”

Three years later, and Troock still experiences this kind of euphoria on a regular basis, in spite of some of the challenges she encounters as a business owner.

When she first opened the restaurant, her biggest challenge was having to wear multiple hats. “We only had one manager so my typical day was running day-to-day operations and coaching and training staff so that they could easily manage their tasks, too,” says Troock.

Now her greatest obstacle is managing a range of staff from a myriad of backgrounds and demographics. Some of her employees are new to the country, some are millennials, and some are of an older generation. “We constantly have to change our management style to find what motivates each employee,” notes Troock.

That said, it’s a challenge that Troock’s extensive background in the quick service industry has prepared her for. As she puts it, “as a leader, you have to be willing to adapt to all sorts of situations.” She sets the bar high for employees, but she also thinks it’s important to have patience and to communicate effectively so that the entire team understands the goals.

That nugget of wisdom has served her well. At Triple O’s annual conference, Troock received the company’s most prestigious award, and was named a Nat’s All-Star. The award, named after the company’s founder, Nat Bailey, honours Triple O’s operators (franchise or corporate) who achieve the best business results in their restaurants. She didn’t win this award once; she’s won it two years in a row.

When asked about the secret sauce to her success, Troock boils it down to a few key ingredients. “We do our best to run a really top-notch operation, provide great customer experience, and prioritize cleanliness.”

She also ensures that this service extends beyond her restaurant and into the wider community. Since becoming a franchisee, Troock and her team have given back to KidSport, a national not-for-profit organization that provides financial assistance for kids who want to play sports. She’s been a top donation raiser in her franchise for three years in a row.

Teresa’s decision to become a Triple O’s franchisee was an easy one in part because she knew what she wanted. Having the opportunity to work in the chain prior to becoming a franchisee gave her the insight and understanding of the concept, making it a perfect fit.

She says the franchisor is all about support, initial and ongoing. “You don’t just start, and they leave you or ignore you. They really want you to succeed, to be successful, and to overcome any obstacles that come your way,” says Troock, noting that she can contact home office any time or reach out to her fellow franchisees.

While she’s had to go through a tremendous learning curve, the support has made her investment in a Triple O’s franchise a decision she never regrets.

“It has not only been rewarding financially, but personally,” says Troock. “I now have the time to achieve my personal bucket list. For example, I’ve wanted to play ice hockey since I was nine years old and now I get to play ice hockey.”

She also has two dogs and now has the time to get them involved in agility, sheep herding, and frisbee competitions, and has time to enjoy camping with her husband. She says being a franchisee affords her the time to live out the life she’s always wanted.

The First Year: Dealing with Disaster

A Day in the Life: Building a Bright Future