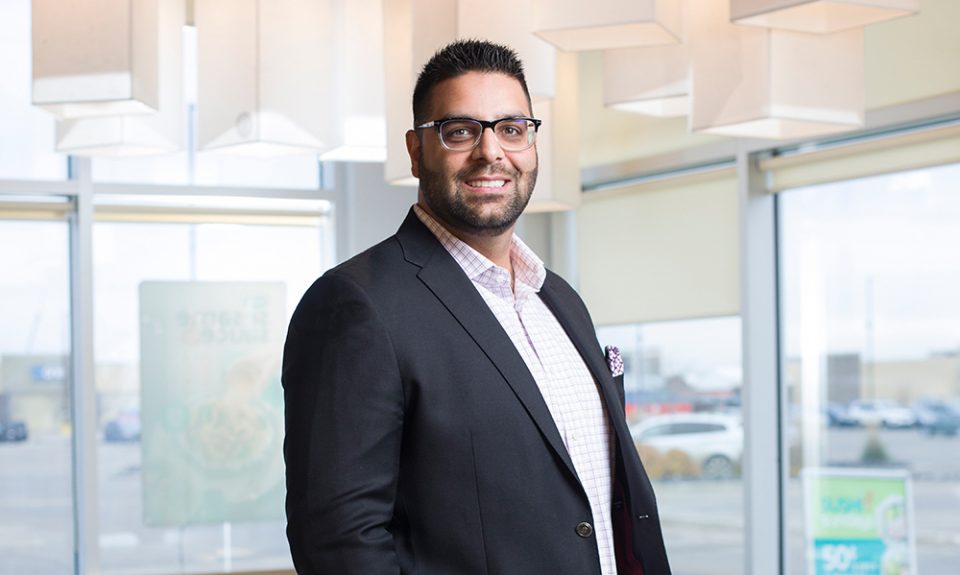 When he was growing up, Nadim Hirjee’s parents used to take him for a bite to eat after swimming lessons at the local mall food court. “We always ate at Edo Japan as a family,” he says, and that experience influenced his decision to own an Edo Japan franchise of his own as an adult.

Edo Japan serves freshly made Teppan-style teriyaki meals with a signature sauce. The concept was started in Calgary by a Japanese Buddhist minister who left the organization after being appointed Bishop of the Buddhist Churches of Canada, but his original vision of serving high-quality and healthy traditional Teppan-style meals continues. The company began franchising in Alberta in 1981, and now has 140 locations, a combination of street front and food court franchises, in all western provinces, plus Ontario and Quebec.

Before purchasing his first Edo Japan franchise, Hirjee had no experience in the restaurant industry. He owned a mobile cell phone store, but as that industry changed, he was also ready for a change, and after careful research of different franchises, he felt that Edo Japan was the clear best choice.

“It’s one of the most successful quick-serve franchises in Canada,” he says. “I looked at the amount of revenue generated in a small footprint, and once you meet the head office team, you have a good comfort level with the franchise. Plus, the Teriyaki sauce is amazing!”

Hirjee opened his first Edo Japan street front location in the greater Edmonton area in 2009, with the franchisor looking after all of the leg work, from identifying the best location and negotiating with the landlord to overseeing the build: “It’s a turnkey operation.”

He has added new locations every few years. “Fast forward to today, I now own four locations in Edmonton – all built from scratch ­– and purchased an existing location in Spruce Grove, Alberta (a bedroom community to Edmonton) that I took over in November (2019).”

Looking back on his first year, Hirjee remembers working 75-hour weeks for at least the first six months. “When you first open, you are doing everything from A to Z, and your team is relying on you to train them. If your staff train well and you can retain them, once they know the routine, it takes some of the pressure off.”

Finding good employees was one of his biggest initial challenges, and Edo Japan was able to help with staffing. Some of Hirjee’s original hires have stayed with him and have been promoted to management positions in his stores. “We are now a fairly well-oiled machine,” says Hirjee, who stresses the importance of surrounding himself with good reliable staff, especially now that he owns multiple stores and can’t run all of them himself. “The key is to create a great work environment and compensate them well.”

Another challenge was learning the market and bringing awareness to the new location. “As a new franchisee, you can often be faced with new challenges such as learning your market, identifying your customer profile, and bringing awareness to a new location, but fortunately Edo Japan ensures its franchising partners have the tools to achieve success. It provides access to an expert marketing team that helps you focus on your location’s unique market. With corporate guidance, my team looked for ways to get involved in the local community.”

“We approached PTAs and parents about participating in their hot lunch programs – it was at a time when they were starting to look beyond traditional pizza days. We figured, if you get the food to students and they like it, they will bring their parents to Edo Japan. We also met face to face with businesses in our areas. For example, there were a lot of car dealerships near our location, so we brought free samples for lunch and gave them ‘bounce back’ coupons for discounts when they visited the store.”

Before opening his first store, Hirjee participated in Edo Japan’s comprehensive five-week hands-on training program, and as he expanded, he also sent his new managers for the same level of training. At that point, all start-up training was done in Calgary, where Edo Japan’s head office is located. With growth into other provinces, there are now more training locations, including in one of Hirjee’s Edmonton stores.

Hirjee is happy to help train and mentor new franchisees. “I remember how helpful other franchisees were when I first started,” he says. The company encourages that peer-to-peer support to supplement the franchisor’s ongoing training and coaching.

“Edo Japan does a fantastic job in providing ongoing training and support and communicating procedure changes. They also frequently have the regional operations manager visit the restaurants,” says Hirjee.  “With over 40 years of experience and success, Edo Japan has mastered its ongoing operational support. The management team is always accessible and there to assist when needed, and there is a system-wide marketing program, which is invaluable.”

Hirjee appreciates that Edo Japan encourages franchisee input. “All franchisees have a voice within the community. You feel heard and your opinions are valued in the decision making. Feedback that we provide such as testing new items, equipment, etc. is always taken into consideration and often implemented.”

“In order to stay current, it’s important to be hands-on with your team and with your customers. Being at the restaurants regularly, gathering feedback from my team and customers to see what they like and what can be improved on is a great way to stay current,” he adds.

While Hirjee feels that Edo Japan continues to be a good choice for him, he has some advice for anyone who is currently considering the purchase of a franchise. Franchising can be a great way to start a business, because someone else has developed systems and thought about every aspect of the operation – things you may not even be aware need doing. But from Hirjee’s perspective, it’s important to find one that is a good fit.

“Do your homework. Find a franchise that aligns with you and your market, and don’t underestimate how much work is required. Curtail your expectations, put your head down, and learn all aspects of the business. You have to become an expert so you have the ability to train your staff.”

“It is evident that Edo Japan wants its franchises to thrive and achieve their business goals, but you might be surprised at the level of work that is required when you start out, especially if you’ve never worked in a restaurant before. It’s an immense amount of work,” he adds.  “Always remember, you will only be as successful as the rest of your team, so ensure that you take the time to build a solid team that believes in each other and in the brand.”