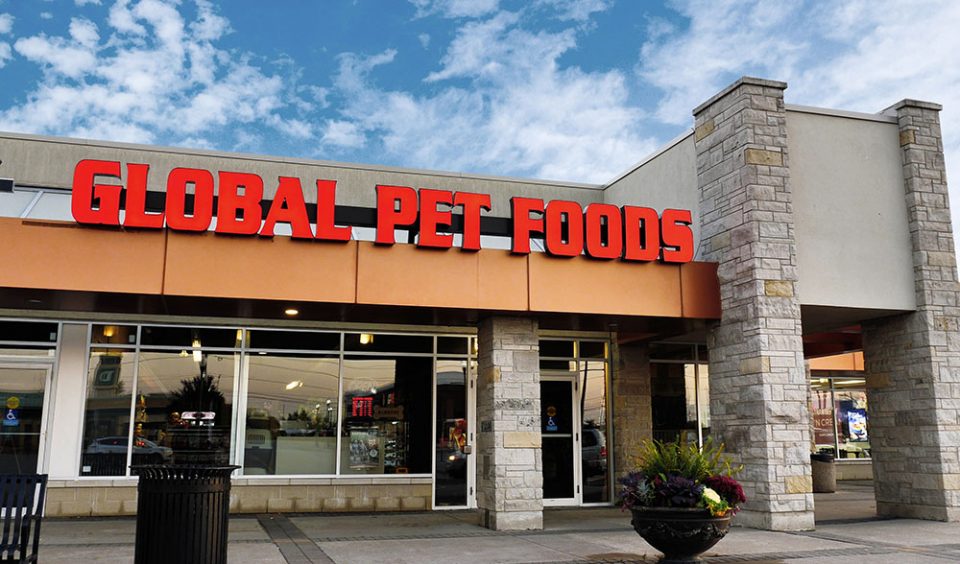 Some people are lucky enough to get to bring their dogs to their office, but at Global Pet Foods, pets at work are part of the job. Pet lovers Ambrose and Maureen Yung are two years into their journey as franchisees of this nationwide specialty retailer that focuses on pet nutrition.

The husband-and-wife team’s franchise journey started during a routine shopping trip to their local Global Pet Foods store to buy food for their dog, Mochi. The couple started up a conversation with the franchisee and had the realization that while he looked youthful, he was running his own successful business. After learning all about his experience, they started to get excited about the idea of owning one themselves. “We asked him about the franchise itself and we thought if this guy can do it, and he’s fairly young, then maybe we can, too,” recalls Maureen.

From there, the couple emailed Global Pet Foods head office to ask some questions and to learn about the process of becoming a franchisee. At the time, Maureen was working in banking, but her dream for retirement had always been to start up a doggy day care, so this opportunity aligned closely with her interests. It wasn’t long before the couple decided to take the leap into becoming franchise owners. “I said, I’m going to quit my job, and we are going to do this, because the best time to take risks is when you’re young,” Maureen recalls.

Together, Maureen and Ambrose run their business. Ambrose still has his 9-5 job working for the government, so he covers evenings and weekends, while Maureen covers the daytime shifts. “We do have a lot of staff as well, so we don’t have to be here 24/7,” explains Maureen. Even with this busy schedule, Maureen gives the experience a glowing review. In fact, the couple loves their new franchise life so much, they opened a second location.

Coming from the world of banking and working for the government, the couple didn’t have a background in business, so support from the franchisor was key to getting off to a strong start. “We didn’t know anything,” says Maureen. “We are not from the pet industry and I never worked in retail before, and neither had my husband – not even as high school students.” She adds that while there was a lot to learn, head office was there to teach and support them every step of the way.

For someone who’s considering this franchise, Maureen says that a background in business or retail experience isn’t necessary. However, “One hundred per cent, a background with pets is important so that you can relate to the customer,” she asserts. The rest, she says, you’re able to learn through on-the-job training with the franchisor.

To make sure that franchisees are well-versed in the ins and outs of running a Global Pet Foods location, all new franchisees receive training at the corporate store. Over the course of a month, rookie franchisees learn everything from ordering merchandise to receiving stock to mastering the computer systems. “You work there as if it was your own store,” says Maureen. “It’s really helpful because when you get your own store, you pretty much do the same things.” She adds that not only does the training include day-to-day tasks, it also includes important bigger-picture duties such as taking care of the finances.

After that initial training, franchisees continue to learn on an ongoing basis. Head office stays in touch with monthly newsletters, as well as email communications. “We hear from them at least every two weeks about something,” says Maureen. Distributors and brand reps from pet food companies also come into the store to educate the staff and franchisees about what’s new with their products and the latest in pet nutrition.

The Yungs found the concept of franchising appealing because it allows them to own their own business with the experience and support of an established system behind them. “You’re self-employed, but at the same time, you have a support system and you don’t have to figure out everything out by yourself, versus when you start up your own business from scratch,” says Maureen.

She adds that one of the biggest benefits of owning a franchise is that everything is already set up for you. “You don’t have to think about the computer system, you don’t think about where you’re going to buy a product because they already tell you which distributors to use, and you don’t need to negotiate discounts because the head office has already negotiated with the distributors,” she explains.

The Yungs love their new life as Global Pet Foods franchisees. “It’s a fun industry,” says Maureen. “You go to work, pet dogs, and talk to people about their pets – and you talk about your own pets and share pictures.”

She describes her workplace as a positive, welcoming environment for staff and customers alike. “In a lot of retail environments, you get customers that come in angry already. We rarely have any angry customers here because people come here to get things for their pets – their loved ones,” she says. She notes that even when there’s a complicated situation, customers are pleasant to deal with, and it’s usually possible to find a solution that makes everyone happy.

As with many retail businesses, one of the Yung’s biggest challenges is hiring and retaining staff. The high turnover rate is especially hard for Global Pet Foods since the staff need such specialized knowledge about pet nutrition, which requires a lot of ongoing learning. “We’re always learning new things, so if you can’t keep an employee for more than a few months, you’re starting out with a blank slate again,” she says.

Overcoming this challenge is an ongoing process. One of the strategies that the Yungs use is to over-hire staff. “Hire more than you need because not all of them will last,” advises Maureen.

Maureen cites the franchisor’s support as one of the biggest advantages of being part of the system. “If you ever have any questions, even about the most random things like ‘Where do I get extra shelving?’ or questions about your landlord’s responsibilities, they can answer it for you,” she says. “You can ask questions if they’re not about operating the business itself. There’s always somebody I can ask If I have a question.” With such hands-on support from the franchisor, franchisees don’t have to worry about making mistakes that may cost them time and money.

Maureen has some advice for would-be franchisees and those just starting out with their business. “Be prepared to work a lot,” she says. She also recommends being generous when hiring staff. “If you choose to operate the business all by yourself, you can’t provide the level of service that you should for this business, so definitely invest in people and hire people to stay.”