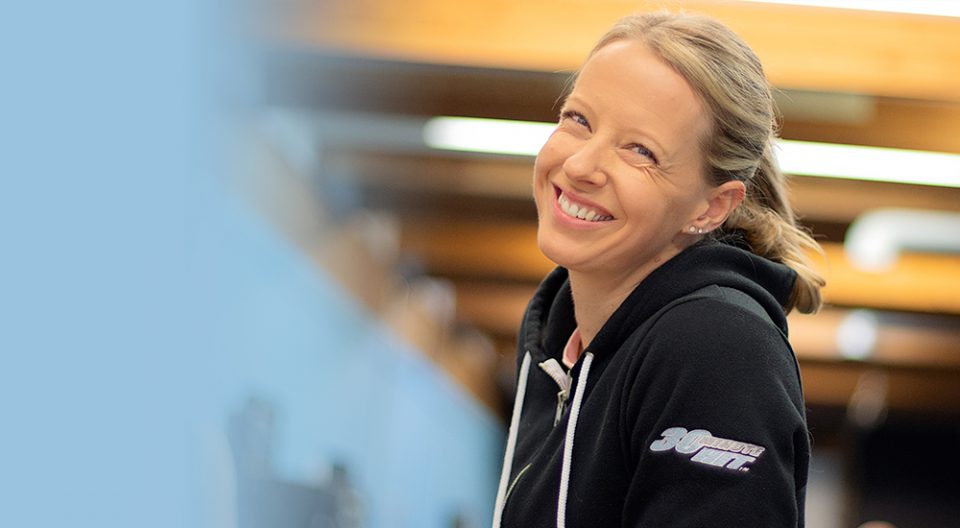 Ten years ago, Kristi Bieber walked into a 30 Minute Hit in Surrey, British Columbia and changed her life. At the time, she was a stay-at-home mom with two kids, so a guided kickboxing class outside of the house designed specifically for women seemed like just what she needed. But she soon found that it wasn’t just the “killer” 30-minute workout she was after, but the confidence these classes instilled and the strong sense of community they fostered. “I fell in love with it,” she says.

She loved it so much, in fact, that Bieber, her husband, and now three kids moved to Vernon, B.C. specifically to open a 30 Minute Hit location. At the end of 2014, she called up the corporate team at 30 Minute Hit, and asked: “Do you guys want a Hit in Vernon?” Their response: “Absolutely.” Five months later, she opened her location in a little strip mall on the outskirts of the city and jumped into one of the most challenging and rewarding years of her life.

The premise of 30 Minute Hit is simple: participants, aka “hitters,” spend two minutes at each of the 13 stations, which are based on boxing, kickboxing, general self-defense, and core stability training. The final station, a mannequin lovingly known as BOB (Body Opponent Bag), is where they can put to use everything they’ve learned on the circuit – punches, kicks, etc. Instructors are there at all times, bouncing from hitter to hitter, to help with technique and motivation.

The franchise was started by Jackson and Deanna Loychuk in 2004, partly as a way to forego some of the challenges that women face in typical boxing and kickboxing classes: inflexible class schedules, leering men twice their size, and expensive fees for training that wasn’t always the right fit. As of writing, there were 57 locations in Canada and nine in the U.S. There are also plans to open eight more in Canada, nine more in the U.S., three in Riyadh, Saudi Arabia, and one in Belfast, U.K.

The initial franchisee investment ranges between $100,000 and $165,000, and the royalty rates are based on a flat fee system that starts at $500 per month. Franchisees have come from a wide variety of backgrounds, from finance to personal training, but the two main qualities the franchise looks for in franchisees are energy and passion.

By all accounts, Bieber, who came with an education in public relations and several years of experience in the restaurant industry, had that energy and passion in spades. And while she loved the 30 Minute Hit concept already, what really drew her to becoming a franchisee was the flexibility it offered. “Lifestyle is super important to me – my kids always come first,” she says. “So, when I expressed that in initial meetings with Deanna and Jackson, they were very supportive of that, because that’s how they want their franchisees to live.”

As Bieber found out in her first year in business, that wasn’t lip service, either. She was busy, of course, but she wasn’t working 80-hour weeks, and she was able to get her kids to school every day, pick them up, and put them to bed. She was even able to take a week-long trip to Mexico for a friend’s wedding.

What surprised Bieber about that first year, however, was just how impactful 30 Minute Hit could be. Yes, she knew it was huge for herself, but she didn’t realize it would be that consistently transformative – and then some – for others. And not just physically, though that obviously happened, but in how the system helped hitters achieve whatever goals they had. “I’ve had women come through who have reduced or completely eliminated medication for depression or anxiety,” says Bieber. “For some people it’s just the coming to me with their chin and eyes down and leaving with their head held high. And it’s not all attributed to 30 Minute Hit, but it’s absolutely a big part of it, because it’s such an empowering style of workout.”

All of this this isn’t to say that first year was easy, though. Bieber arrived with no business experience, so there were times when she felt overwhelmed by all of the little things she was responsible for – accounting tasks, for example – and she admits there was a steep learning curve. But, she’s quick to add, the systems that are in place are “fantastic.” She points to the operations and training manuals as being particularly helpful in how clear, comprehensive, and easy to follow they are. Plus, whenever she was feeling overwhelmed or confused, she says she could easily reach out to the Loychuks or the corporate team, and they would be quick to help.

The initial franchisee training program also played a part in relieving some of those challenges, says Bieber. It included seven days of in-person education in North Vancouver for all of the physical training aspects of the business, as well as a few days of one-on-one training from a member of the corporate team in Vernon that involved, in part, learning how to use all of the administrative systems. As with all franchisees, the corporate team also helped Bieber find the right location and negotiate a lease.

30 Minute Hit’s ongoing support systems include an online ticket system wherein franchisees can submit requests for help (Bieber says corporate is “really quick” to respond). Plus, franchisees take part in physical training, called “Hitting It Hard,” every two weeks. There are also occasional webinars for franchisees that cover anything happening on a franchise-wide level, such as new product rollouts.

Corporate support can go even beyond this, however, says Bieber. She was recently asked to be a physical training specialist, for example, which she happily accepted. The role involves helping the company evaluate the training capabilities of new hires. “The franchise always looks within for advancement, and that’s awesome,” says Bieber. “They see our strengths and they allow us to use them. They really see us for who we are.”

Looking back at her first year in business, Bieber says she couldn’t be happier that she made the jump from hitter to franchisee. “I loved the training, I love seeing us grow, but when you see the impact that you can have in the lives of these women that’s my favourite part, hands down. It’s so much fun. I just love going to work every day.”

As for advice Bieber would give to others in their first year as a 30 Minute Hit franchisee, it’s not all that different than what she might tell a new hitter. “Just jump in 100 per cent and trust it. This isn’t something that can be done on the side; you have to be passionate and be willing to put in the time. It’s not complex work, but it’s hard work and high energy. Deanna and Jackson are really smart people, they know what they’re doing, so trust in the model and just put your head down and do it.”

A Day in the Life: Repairing Homes and Hearts

Season 2 Episode 5 | Tamara Leniew – Beyond the Classroom: Franchising with a Passion