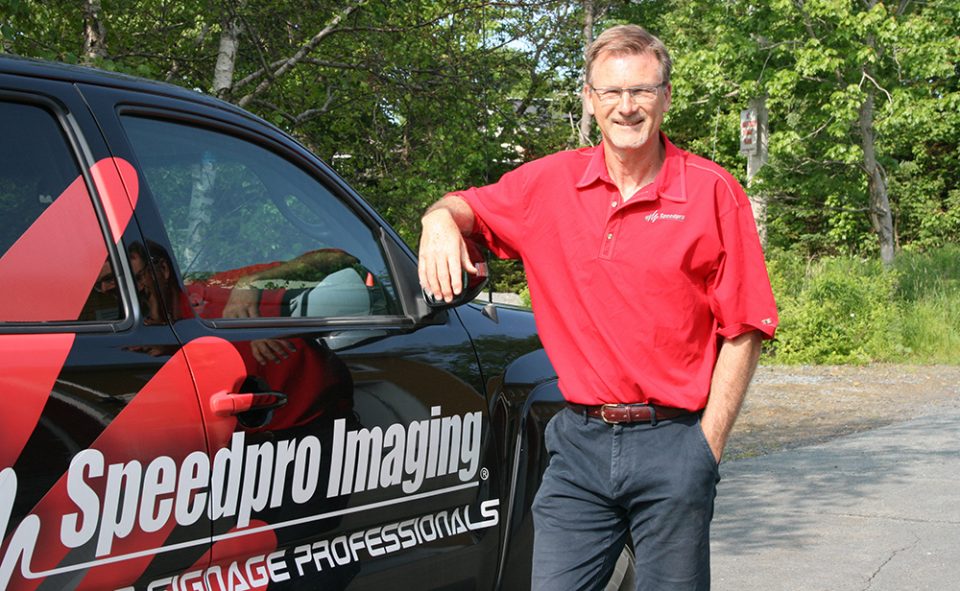 No one can say that Kevin and Kim McKenzie didn’t do their homework before buying their Speedpro Imaging franchise.

Back in 2017, the former pharmaceutical sales and marketing consultant and his wife attended a two-day franchise show, researched tons of franchise opportunities, and met with a number of different franchise representatives. They even met with a franchise broker, who performed a thorough assessment of the Atlantic natives’ strengths and weaknesses.

“After that, the franchise broker narrowed it down to four franchise opportunities, and then we worked on figuring out which one was the best fit for us,” says Kevin.

For the longtime couple, Speedpro Imaging was the best by a mile. “It allowed us to stay true to our personalities and preferences. Since I worked in marketing for a number of years and my wife worked with a number of top brands in the food industry, we’ve always felt pride in the brands that we represented, and Speedpro fulfilled that need.”

“Keep the faith, keep the faith”; that was the mantra Kevin kept repeating to his wife during their first year in franchising. After officially opening their Speedpro Imaging franchise in Halifax, Nova Scotia in January of 2018, the new owners were up against new challenges.

They experienced euphoric highs, along with some lows, but what got Kevin and Kim through this, each and every time, was their mindset. When the doubts crept in and they weren’t sure whether they made the right business investment, they would remind each other to persevere.

This mindset became especially helpful when they started serving a mainly East Coast clientele. “Atlantic Canada is a very loyal market. And the customers we were really interested in doing business with used a lot of signage,” explains Kevin.

When Kevin and Kim engaged those customers, however, they often hit a roadblock. Many of them were satisfied with their current signage providers and saw no reason to start business with the new neighbourhood imaging store.

But that didn’t stop the McKenzies. The way Kevin sees it, “Just because it’s a ‘no’ today doesn’t mean it will be a ‘no’ tomorrow. It’s a dynamic market and things change constantly.”

With their minds set on success, they found creative ways to get around this roadblock. First, they decided to be very clear and strategic about who they wanted as their customer base. Then they developed and executed long-term and short-term tactics. Their graphic designers started creating mini signs and banners that were relevant to their prospective customers’ businesses to help nurture those customer relationships and keep their business top of mind.

To top it off, Kevin and Kim leveraged the tools and strategies available to them through the Speedpro Imaging training program. The first two weeks of the program cover everything from how to use signs to production to sales and marketing.

Franchisees in their first few years of business can also take part in a mentorship program. Most recently, Kevin and Kim’s mentor spent time with them at their Halifax location, evaluating what was working and pointing out areas that could be improved upon.

Now the business is doing well, and Kevin and Kim are using the lessons they learned to help motivate other new Speedpro franchisees. In fact, at their annual National Meeting (where all the Speedpro franchisees come together for training and inspiration), Kevin was able to offer advice and mentor a new franchisee.

“He had some clear questions about starting his business from scratch, and I was able to help him out. I heard myself saying the same things that other franchisees were telling me,” says Kevin.

If Kevin had to use one word to describe their experience thus far it would be “excellent.” Even though he’s a risk taker at heart, he’s happy he took the time to find the right franchise. A franchise that gives him and his wife an added layer of security and community.

“When speaking to other Speedpro franchisees, the story was consistent in that they would say ‘I remember where you were, so just keep the faith. Keep nurturing it and the business will grow.’ That positive reinforcement from others who have walked the path we were walking was and still is everything. It’s this collegiality that’s helped take a bit of the business risk away and gives others the reassurance they need, too.”