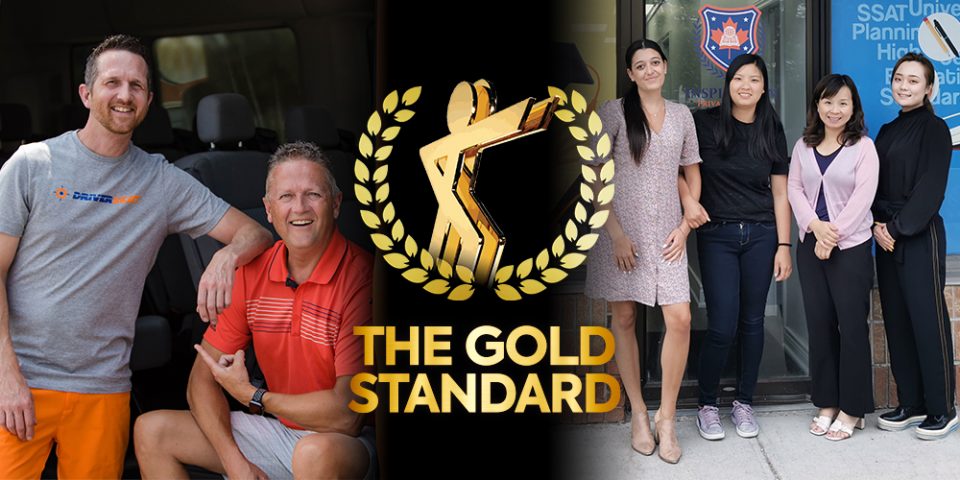 On April 8th, franchisors and franchisees from across the country gathered in Niagara Falls, Ontario for the Canadian Franchise Association’s (CFA) annual Awards of Excellence gala. As always, it was the most anticipated event in Canadian franchising of the year, and it turned out to be one of the most memorable for Inspiration Learning Center and Driverseat, who took home the two prestigious Grand Prize awards.

Like all of the awards, the Grand Prize is determined by the results of a survey completed by participating brands’ franchisees about their levels of satisfaction with the system. It’s the pinnacle of achievement in Canadian franchising, and as CFA President and CEO Sherry McNeil put it, Inspiration Learning Center and Driverseat “demonstrated they are the very best in Canadian franchising in 2019.”

Here are their stories.

Amaree Watkis and Dwayne Leach have more than 30 years of combined experience in law enforcement, so when it came time for a career change, they certainly knew how to investigate all of their options. And at the end of their “investigation” last March, one of the big reasons they landed on Driverseat was how much the founders and the management team care about their franchisees.

“Time after time, when we reached out to [CEO and co-founder] Brian Bazely, he would respond within minutes,” says Watkis, now the co-franchisee with Leach of the Brampton Driverseat location. “So if the co-founder has time in his busy schedule to do that, it only makes sense that that’s the culture of the organization. And it has been.”

Launched in 2012 by Brian and his brother Luke, Driverseat provides chauffeur and shuttle services using its own vehicles or those of its customers. With 58 franchises and counting, the company is in more than 400 communities in Alberta, Saskatchewan, Manitoba, Ontario, Nova Scotia, and the United States. By the time you read this, it will also be in British Columbia.

Brian says that the degree of support that Watkis and Leach experienced when they were doing their due diligence was no accident. It was baked right into the company even before the Bazelys had the Driverseat concept worked out.

The founders also knew they wanted a franchise company that was progressive, had real purpose, and could build real profit for themselves and franchisees — aka the “Ps” of the company.

“And so,” says Brian, “eventually we identified that we could hit those ‘Ps’ with something like Driverseat, because there was certainly a need to provide transportation for the elderly, or those who just didn’t like driving on the highway, or who had been drinking. No one was really doing that on mass.”

Everything is operated through a specially-designed technology platform that allows customers to order and track their drive, and franchisees to easily manage the business.

Because that technology handles most of the management side of the business, Brian says that an ideal Driverseat franchisee is someone between an omnivert and an extrovert. “Someone who really loves shaking hands with people and chatting with people and talking to them on the phone is going to be very, very prosperous.”

The future of the company in general looks quite prosperous. With almost 50 per cent of potential franchise locations in Canada sold out, Driverseat is looking to continue growth south of the border and elsewhere. This fall, they’ll open in two to four U.S. states, and Brian believes that in “fairly short order” they can be in 20 other countries.

Amaree Watkis couldn’t be happier to be along for the ride.

His advice to potential franchisees looking at Driverseat is to have faith that the system works but to do your due diligence and to talk to the Bazelys. “Once you do get to speak to those founders, you get to understand the great atmosphere, the culture that’s still within the organization. Even though we’re as big as we are now, it’s all a testament to their leadership. It’s just awesome to be a part of.”

Though it was only last March when Henry Ho launched his Inspiration Learning Center location in Newmarket, Ontario, the world of academic tutoring is nothing new to him. For years, he and his wife had tried different tutors and after-school programs for their two kids. Some were good, some weren’t, and he could usually tell the difference pretty quickly.

Which was why, one day, he had a thought: Why couldn’t I open my own tutoring centre? Sure, he didn’t have any formal training as a teacher, but he knew he had a passion for education and an understanding of what makes an excellent tutoring program. He just needed the support of a good franchise

And that’s what led him to Inspiration Learning Center, a tutoring and private-school franchise now with four corporate locations and 10 franchise locations across the Greater Toronto Area, plus one in Calgary. Along with offering tutoring for all subjects from Junior Kindergarten to Grade 12, many of its franchisees also sell workbooks and provide education and planning consulting services on everything from applying to Canadian and international universities/colleges to building individualized academic plans. They also offer high school credit courses in their private school format. “We really are an all-in-one education service provider,” says owner and founder Angel Kuang.

The big thing that drew Henry Ho to the franchise was its east-meets-west teaching philosophy. Eastern education tends to focus on regular practice, memorization, and frequent review of the fundamentals. Western styles are more about the development of creativity and critical thinking skills, the communication of ideas and concepts, and the use of interdisciplinary methods. Inspiration Learning Center uses both.

“Being from China, I’ve experienced both styles, so I know the difference and what’s good about them,” says Ho. “So when I looked at the franchise, I immediately realized how good of an idea this is.”

Setting franchisees up for success

He also quickly realized how practical and comprehensive the franchise’s systems and supports are for franchisees. Most of those are due to Kuang, who started her own language centre in China before moving to Canada and earning a master’s degree in economics from Lakehead University. She launched Inspiration Learning Center in Toronto in 2003.

“I built up this concept from scratch,” says Kuang, “so I developed, designed every single form, everything. It’s very easy to understand, especially for the people who have never been in the education field before.”

The three-week franchisee training program is similarly practical and easy to understand, says Ho, and it gave him a full overview of the primary and high school system in Ontario, as well as the ins and outs of what’s needed to apply for post-secondary education.

“They have ongoing training, too,” he adds. “Every quarter, for instance, there will be something new, where at the same time all of the franchisees sit together and address the issues we have so that we can learn and share and find answers from each other.”

As for finding new franchisees, Kuang says she doesn’t necessarily look for professional educators, but instead for people who have a passion for education. “I believe that anyone can do this, as long as they have a love for education, they want to help kids, they have the business acumen, and they’re not afraid to go out and market.”

She’ll be looking for more of those types of partners in the near future. Though Kuang doesn’t want to grow too fast, her goal is to open three to five new locations per year. And as the company grows, she says she fully intends to stay deeply connected to what’s happening in the classroom. “That’s why I have those corporate centres – to have a better understanding of what the market looks like, and to see new programs, new directions, to guide the franchisees going forward.”

One piece of guidance Ho has for new Inspiration Learning Center franchisees: come with passion. “You have to really enjoy this to be successful, to motivate yourself. Take me: I have two kids, I like this. Yeah, you want to make money, but you have to find something you like, you have to have that passion for education.”

Q. As a first-time franchisee, what are the five rock star questions I should ask?