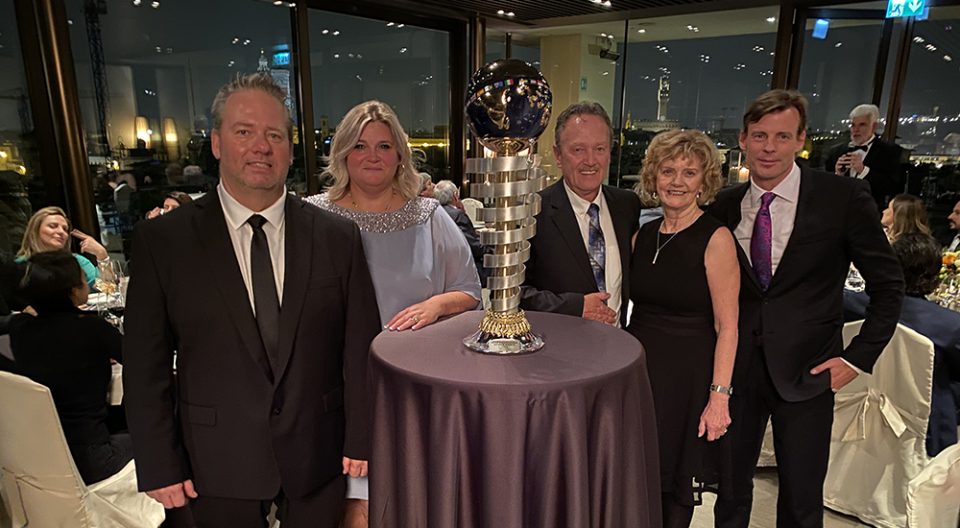 “It was an unbelievable honour to represent Canada at this competition and to win the award for Best Franchisee of Canada,” says Pelley, who travelled to Florence for four days with her husband. They were also accompanied by a Subway® Canada franchisor representative and Canadian judge John DeHart, Past Chair of the CFA Board of Directors.

To determine the Best Franchisee of Canada, sponsored by the CFA and The Business Exchange, three judges evaluated the candidates, who were nominated by their franchisors. While Pelley won Gold for the Best Franchisee of Canada, Paul and Lyne Bimm from TWO MEN AND A TRUCK Canada won Silver, and Seema Ahluwalia from Oxford Learning Centre won Bronze.

As the Canadian finalist, Pelley participated in the Best Franchisee of the World global competition from January 31 to February 1 alongside finalists from other regions, including the United States, Mexico, Brazil, and DACH (Germany, Austria, and Switzerland). Isabella Kling from the DACH region, with fitness franchise Mrs. Sporty, was named the Best Franchisee of the World winner.

Pelley says she and her husband thoroughly enjoyed their learning experience at the global competition. “When we went to Italy, it was really interesting because we got to meet some franchisees from different franchises, and also their franchisors, from different countries,” she explains. “Being the first candidate from Canada to attend this competition, it was a different perspective as well, because none of us knew what to expect. But the process was really well organized and very enjoyable. And they allowed us to have lots of meet and greet time.”

Pelley notes that the process involved introductions of each candidate by their franchisor, along with individual interviews with the panel of judges. She says she enjoyed time with other franchisees, including winner Kling, whom she described as “a real crackerjack.”

While Pelley and her husband were only in Italy for four days, Pelley says they made the most of their limited time in the region. “The first day, we had free and we did a little tour on our own of the area with our franchisor, who came with us. One of the days, after our interviews, they had a private tour of a museum set up for us. The final night, they had their gala. We got to see a lot of the area because it was located on a high floor of a hotel and it was beautiful.”

With this experience under her belt, Pelley is eager to recommend that franchisees participate in the future: “Oh my goodness, for sure. Absolutely!”

This was an experience of a lifetime, and for Pelley, it was also an affirmation of the decades of hard work that went into her businesses. “Aside from the honour, I guess it just kind of lets me know that what I’ve been doing for the last 28 years, I’ve been doing a pretty good job. It validates the work I’ve put into my career,” she says.

Pelley has a long and storied history with the franchise business model. She was introduced to franchising by her parents, who started with a coffee franchise when Pelley was about 14 years old. She worked with them until she pursued a degree in commerce from Dalhousie University in Halifax, Nova Scotia.

“I knew my goal was going to be to own a franchise, but I didn’t know which one. As a student, I became a very loyal customer of Subway® and I started my quest to own one when I was in my third year of university,” she explains. “I had talked to some franchisees on Robie Street [in Halifax] – they were young guys and they were so pumped about Subway®. I had applied from that point on and I was accepted the summer when I finished my third year. I opened my franchise after I graduated the next year.”

Pelley and her husband started with one store in Corner Brook, Newfoundland and eventually expanded to six franchises throughout the province. They purchased 10 more stores in Cape Breton, Nova Scotia when their daughter Emily joined the team, and Emily moved to the region to operate the newest additions.

Pelley says her success in franchising can largely be attributed to her affinity for the business model. She enjoys following the proven guidelines set out by the franchisor, while building on them with her own innovations.

“I’m the absolute perfect candidate to be a franchisee because I’m a rule follower by nature,” she explains, noting that it’s also important to maintain a strong presence in the community through sponsorships and volunteering.

While Pelley and her family now own 16 Subway® franchises in Atlantic Canada, she recognizes that it wasn’t always smooth sailing.

“The very first challenge was when I opened the Subway® here in Corner Brook all those years ago, people didn’t even know what Subway® was – all they thought about was an underground train. I was also the very first smoke-free restaurant way back then. I had multiple people tell me, ‘you’re never going to make it being non-smoking.’ But we stuck to the healthy values of Subway® and we were able to grow to three franchises in Corner Brook right now,” Pelley says. She notes that another challenge was juggling children with her career but says being self-employed provided her the flexibility to put her family first.

The Pelley family has been working together in franchising from the start. Pelley says their family dynamic has been another source of their success. “My husband and I have been together since I was 13 years old, so we have carved out our roles right from day one. We try not to step on each other’s toes; we respect each other’s boundaries,” she notes. “Having our oldest daughter Emily work with us is absolutely amazing. She wants everything done perfectly and she’s up to date on all the technology, so she’s great. The only disadvantage I can think of is that if something happens, we’re all affected, because we’re all in this business together.”

As for what’s next for Pelley, she says, “We’d like to purchase more stores, we’re always open to new ideas. My parents are still in the franchising business with coffee, our other daughter has a pizza franchise, so we have three generations of franchising in our family. We’re always on the lookout to see what other opportunities are available.”

For those considering franchising, Pelley stresses the importance of doing your due diligence, especially when it comes to connecting with other franchisees in the system. “Talk to as many franchisees that are willing to give their time. I know cold calling out of the disclosure document is sometimes a little scary, but you really have to do that,” she advises. “And if you can get the opportunity to spend time in-store with a franchisee before actually putting your name on the dotted line, that would be a great idea, to see what their daily lives are like and what it’s like to spend time in a store.”

“I just want to sincerely thank the Canadian Franchise Association for giving me this opportunity and thank you to Subway® Canada for nominating me. I’m blessed. I love my life as a franchisee and I would encourage anyone to follow that route,” she adds.

Q: Why is it a good time to consider franchising as a new career option?