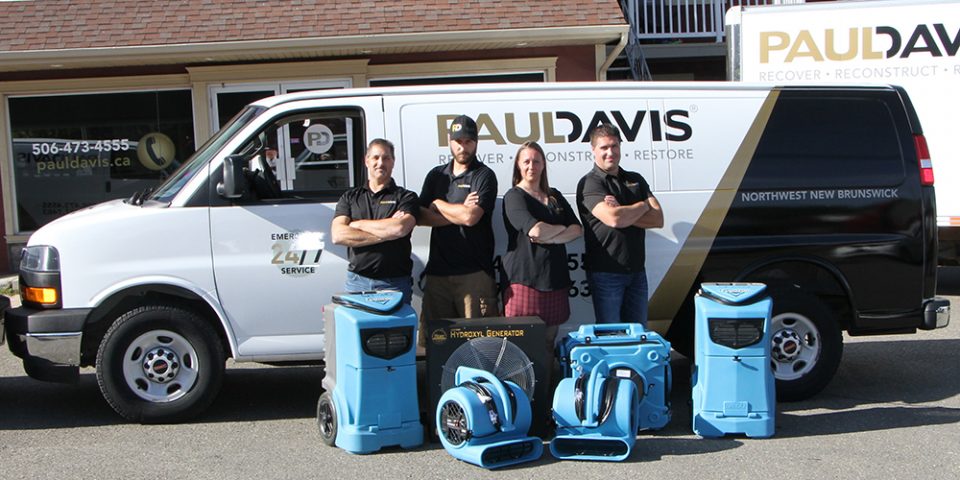 Paul Davis Restoration franchise owner Sylvie Levesque knows firsthand what it’s like to have your home damaged by circumstances beyond your control. In April 2008, Levesque experienced water damage in her family’s home.

“I was a new mom, with my second child, and the room in the basement that was affected was my kids’ playroom,” shares Levesque. “We were having a difficult time financially, so it couldn’t have happened at a worse time.” But looking back 12 years later, she says she wouldn’t change a thing.

When her basement flooded back in 2008, she says, “I knew this gentleman who could do a really good job because of the work that I had seen him do. So, I gave them a call. What I didn’t know was that he had just finished his owner’s training with Paul Davis. When he pulled up in my yard with a Paul Davis trailer, I went online and searched out the company.” Levesque found out that the contractor had started this new company, Paul Davis Restoration, which is indeed how she first came to know of the exact franchise location she now owns.

With a degree in bookkeeping, Levesque was looking for a job at the time of her basement flood. The contractor mentioned that he was looking for someone in accounting, and Levesque was hired in May 2008 as the Job Cost Accountant (JCA). “I like to call the JCA the office manager/receptionist/bookkeeper. Pretty much anything regarding paperwork comes across the JCA’s desk,” she notes.

“Ten years after I was hired as JCA, I was given the opportunity to become an owner,” says Levesque. “My employer had decided he was ready to sell, so I sent my application to corporate, went through all of the steps, was vetted as an owner, was approved, went through all of the financial steps, and then in August 2019, finally became the official owner of Paul Davis Northwest New Brunswick.”

Levesque’s pride in the business is clear, and her dedication to her clients is inspiring. “I have been the official owner now for not quite a year,” Levesque adds, “and it’s been quite the roller coaster!” No doubt, no franchisee could have known what was ahead in terms of the COVID-19 crisis, but Paul Davis acted quickly to put protocols and guidelines in place across North America to ensure the safety and well-being of their customers and employees.

Of COVID-19, Levesque generously shares her experiences: “Being in New Brunswick, we haven’t had many cases, and none in our area that I know about. We weren’t in a situation where a lot of people were directly affected. It did make us busier, though, because we are considered an essential business.”

Given this designation, the franchise immediately stepped up to put the appropriate safety measures in place for both customers and employees. Levesque herself has been key in implementing safety measures for her franchise. “We have a program (TouchLess Service) that we have access to through the franchisor, which includes guiding the insured through a smartphone link in order to have them take the pictures that we need for the insurance company. We had to figure out ways to do our inspections that would keep our staff safe but also keep the homeowners safe. We started doing virtual inspections,” Levesque says of the company’s investment in technology aimed at navigating the reality of the pandemic.

“The fact that I’ve gone through it myself, I am empathetic to what clients are going through,” Levesque says of the devastating experience of property damage. When asked about the importance of empathy, Levesque shares that she believes it is the most important trait a franchisee can have in the restoration business. “Most of the time when people call us, they are in distress or are panicked. This really links into who I am as a person — somebody who is always looking for how I can help someone.”

In line with this mission of service and understanding, Levesque also emphasizes the importance of being a part of the community. “Organizations like the Santa Claus breakfast, the food banks — whenever they come to me for financial support, I always say, ‘Absolutely!’” she continues. And this positive outlook also serves Levesque well in her day-to-day operations. “You have to be compassionate and passionate about what you’re doing,” Levesque says of her operating philosophy.

A personal connection to and fulfillment from your work is crucial when you’re a franchise owner, Levesque knows, as she doesn’t have a time that her day ends, per se. “I know I’m in the office for eight, but I don’t know what time I leave,” she shares, speaking especially of those first few weeks during the pandemic.

“I saw myself a lot of nights being there till nine, 10, 11. Making sure we were able to switch over with the new protocols, getting things set up with virtual inspections, making sure we had enough supplies, putting in orders, following up with other franchise owners and seeing how they were handling things,” she says, providing a sneak peek into her recent to-do list. “Things now are getting more normal, though, and my days mostly end anywhere between five and seven. I always have my phone on me. Once you’re in the industry, you’re on call 24 hours a day, seven days a week.”

Levesque knows that this was where she was meant to be, though, and that is what drives her to continue to strive for further success each day. When asked what advice she has for future franchisees, aside from the integral place of empathy in the business, she says, “You know what? Just go for it. Don’t let anything stop you.”

In terms of getting started, Levesque shares, “If you’re somebody who’s just starting out, who is going to build the franchise location from scratch, I would say you need a general business knowledge but also construction knowledge. If you’re buying an already existing franchise, like I did, then you’ve already got key people like project managers and carpenters in place. In that case, I’d say business is what you’d need — business, financial, marketing.”

Not only has Levesque been at the helm of a successful franchise for the past year, but when she bought the franchise, she was the first sole female owner of a Paul Davis franchise in the Maritimes, as well as only the second sole female owner in all of Canada. Levesque remains humble, though, and uses the pride in such achievements to fuel her positive relationships with the franchisor, other franchisees, employees, clients, and family.

“For me, I’m mostly in the office. I do a lot of analysis, and we have a lot of protocols that are changing regarding our agreements with the insurance companies. I make sure we stay on top of that, give information to my project managers. Then it’s answering emails, questions, taking care of the contents department, doing scheduling, following up with project managers, looking at what’s coming up,” she continues, adding: “It’s basically whatever the day throws at me.”

Her final advice? “Just tackle it all.”