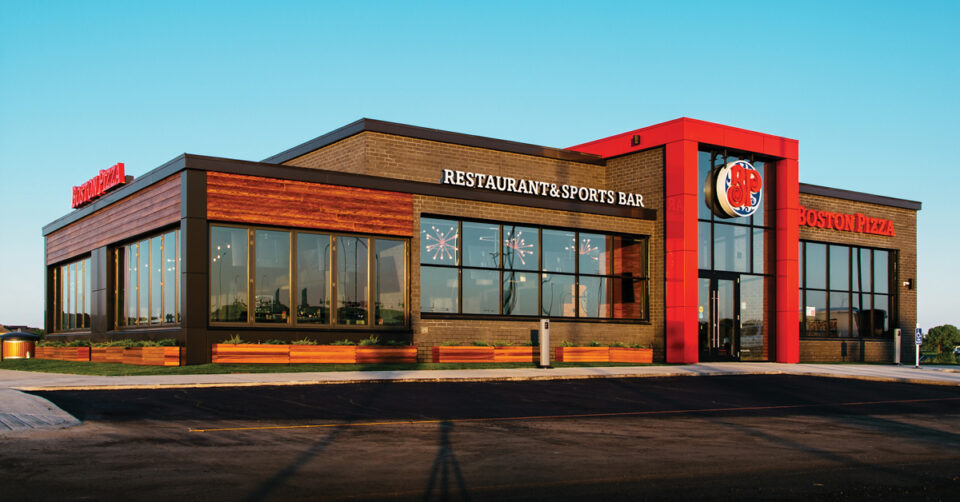 Iconic brand Boston Pizza has been serving up cheesy pies since 1964, while collecting new franchisees and fans along the way

Steve Silverstone had worked for Boston Pizza’s corporate marketing department for eight years before he realized that he didn’t just want to market this iconic brand, he wanted to represent it as a franchisee. So, in November 2017, after 25 years in marketing, he made the leap to take over an existing franchise in Vaughan, Ontario. “It was always something I wanted to do—I started out early on in my career in food service, and I wanted to take responsibility to run my own business,” recalls Silverstone.

Before signing on to his own location, Silverstone did his due diligence as a potential owner by checking out other franchises. But his research led him back to his career home base, both because a location became available in his community, and because he knew he could trust the brand. “I knew who my partner would be in terms of the franchisor, and I understood their culture and commitment to making their franchisees successful.”

Many Canadian franchisees feel that similar comfort with this brand that they first experience as customers, says Cailin White, director of national development for Boston Pizza International. “The Boston Pizza brand has served communities from coast to coast for more than 56 years since opening its first restaurant in Edmonton, Alberta in 1964. Today, Boston Pizza proudly remains a Canadian company with its hundreds of local franchise owners operating more dining rooms, sports bars, and patios than any other single brand in the country.” She adds that Boston Pizza also stands out as a brand for offering two experiences under one roof: a family-friendly casual dining restaurant and a separate sports bar.

For Silverstone, one of the benefits of becoming a franchisee was the ability to connect with his community. In taking over a location that had already been established for 12 years, he looked for ways to increase the visibility of the brand through support for grassroots sports, and local philanthropy with a group called 360˚kids that helps youths in York Region.

White says that Silverstone’s perspective is one that she hears from a lot of franchisees. “Not only do you get to do what you love and work for yourself, you do so while giving back to your community. There’s wonderful opportunity to impact the lives of your team and those you do business with,” she says.

In pizza we crust

Ask any restaurant these days about the challenges of running their business and you’re likely to get a one-word answer: COVID-19. At corporate headquarters, White says the focus was on helping franchisees keep their customers safe while following local health regulations. “As Canada’s largest casual dining restaurant chain, we knew we had a part to play in helping get through this global health crisis. This included proactively closing our dining rooms and bars in advance of government mandates in many regions,” she says.

For Silverstone, the challenge was with being very adaptable to lockdowns, which required a lot of quick action in terms of increasing and reducing staff. When it came to customers, one big question was how to stay top of mind with the current customer base, which he accomplished by making multiple pizza donations throughout lockdowns. He also reached out to local businesses that had supported the business in the past and stayed active on social media to maintain a consistent presence.

Equally challenging was the effort to keep in touch with his 40 or so staff members. “We focused on keeping the team engaged and committed while they weren’t working. We kept communications open, whether through texting or platforms like WhatsApp, and we were very honest and transparent about what was going on,” says Silverstone.

He adds that they offered the full takeout menu and delivery options throughout the pandemic, connecting with third-party delivery for those who are loyal to those platforms. He also put a sign out on the main thoroughfare letting customers know they were open. “I think never closing, keeping the message that we were open for takeout and delivery, staying open for lunch, and maintaining close to regular hours helped,” says Silverstone.

At the corporate level, White says that the franchise continues to deal with the pandemic by also looking at new ways to create better experiences for diners. “As we maintain a focus on safety, we’re continuing to explore the implementation of new technologies for touchless dining and take-out experiences,” says White.

In terms of maintaining its brand consistency, the franchise standardizes its employee training with an orientation period for staff and an ongoing online component called BP Learning, which offers a booklet to complete through various stages, online modules, and includes general manager coaching through the process. For franchisees, the training period starts with a four-week Hospitality Leadership Training Program and extends through work at the restaurant which covers everything from how to make pizza dough to how to build schedules.

Now that he’s been on the flipside of the franchise for four years, Silverstone says he loves the instantaneous feedback of being a franchisee. “If guests come in and have a positive experience, you see that immediately. You see sales results on an hour-by-hour basis, so you can adjust and change on the fly. It’s more like a hockey game than a triathlon,” he says.

Equally engaging is getting to work with a team, adds Silverstone. “I love the opportunity to work with a very youthful, high-energy group, that’s committed to the restaurant’s success. I also like helping them in their personal development and training and to achieve their [own] goals, which is very rewarding.”

Silverstone is also grateful for the support of a franchise, which he says was the right choice for him. “My risk tolerance was high enough to run my own restaurant, but I wanted the supporting infrastructure of a great franchisor like Boston Pizza. [It helped] to have the IT expertise, menu expertise, ability to solve problems—and to have a network of other franchisees across the country to be able to tap into, and to come up with solutions to problems that frankly I don’t have a lot of experience in,” he says.

As for his advice for achieving success in franchising, Silverstone says it’s important to love what you do. “Figure out what you like to do day in and day out—you need to love it. Because it’s your own business, you’re all in.” He adds that finding good supports can also pave the way to future success. “Surround yourself with an amazing support group, particularly for areas you’ll need to rely on for the business to be successful, from business partners to electricians to your accountant or your lawyer.”

White echoes Silverstone’s recommendation in terms of finding the right franchise. “It’s important to do your homework. Explore anything and everything that’s exciting to you to find your best fit. Once you’ve identified a concept that speaks to you, visit locations, sample the product, speak with other franchisees and as many people within the organization as you can,” she says.

Silverstone echoes the recommendation to get to know many franchisees as a good barometer of the franchise’s success, adding that he felt aligned with Boston Pizza’s core values, belief system, and capabilities. All this has led to a great career expansion outside head office, where he gets a diversity of experiences and challenges. “No day is the same and it never gets boring!” says Silverstone.