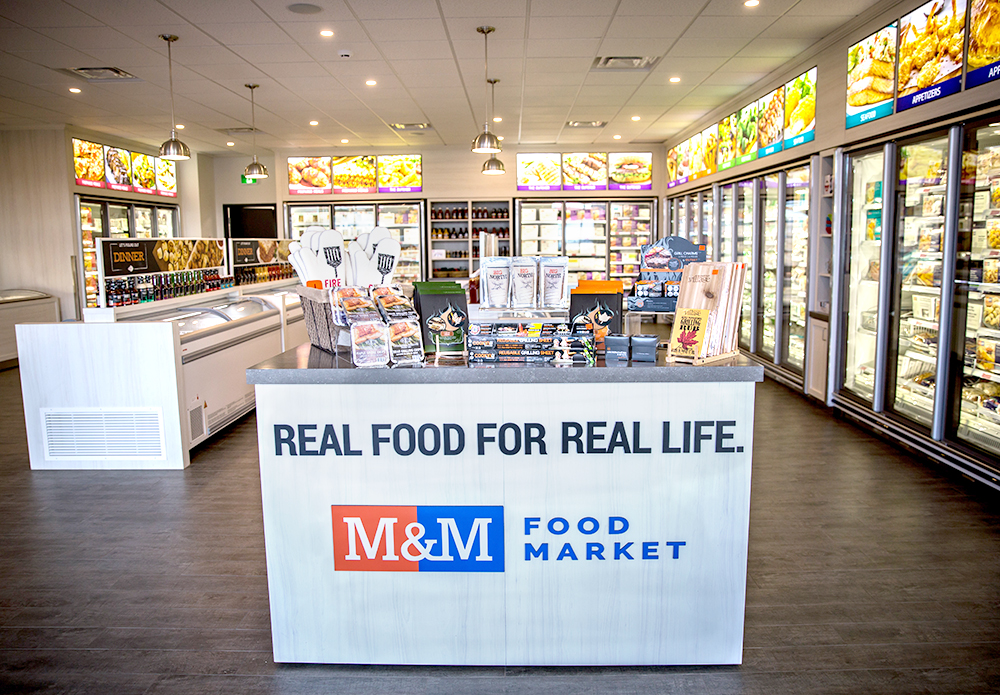 With a unique offering of easy-to-prepare meals coupled with personalized cus­tomer service, the M&M brand has been a welcome guest at dinner tables across Canada for more than 38 years.

M&M Meat Shops was born in 1980 in Kitchener, Ontario when founder Mac Voisin had a vision to pro­vide convenient and nutritious food to busy people who couldn’t spend hours in the kitchen preparing meals. About a year after the first store was opened in 1980, growth was the focus. In the early 2000s, a shift began as restaurant dining became more conventional. Frozen food began to suffer from the icy perception that frozen meant a compromise in quality.

In 2014, Searchlight Capital Partners LP of Toronto acquired M&M with the goal of revitalizing the brand. “When we looked at the category and the customer base, there was a lot to like,” says Chief Executive Offi­cer, Andy O’Brien.

The new company invested millions in research before embarking on a refresh. “The brand had a good base, but it looked and felt a little dated,” says O’Brien. With changing demographics and family structures, he says the goal was to reposition the company to accom­modate the changing consumers.

The research helped direct the company’s focus to what customers wanted most. Today, modified package sizes offer more flexibility, and the removal of all artifi­cial flavours, colours, and sweeteners from every product reflects the savvy customer’s desire for healthier food options. Taste profiles now include a variety of ethnic fla­vours, reflective of Canada’s ever-changing demographic.

“We wanted to change the composition of what we offer. We really overturned the portfolio,” says O’Brien. “We launched 150 new products in the last five years and have improved 50 per cent of our products. Today, 70 per cent of households contain one to two people, and of three or more are eating at different times. We need a more flexible approach to how we prepare meals.”

The name was changed from M&M Meat Shops to M&M Food Market to more accurately reflect the franchise’s myriad of food offerings.

Research also revealed that customers liked the small format of the store, but wanted to walk in and shop for themselves. The striking redesign included the addition of self-serve freezers and the removal of the service counter, leaving the meal advisors free to roam the store and assist customers when needed.

The company shared their five-year plan with its net­work of franchise partners and built two stores to test the new model and gauge customer responses. Once the proof of concept was in place, they began to roll it out at corporate locations. To date, 105 of 350 stores have been refreshed, and the renovated locations are significantly outperforming the non-renovated stores.

Christine Macri, who has been an M&M franchise partner since 2011, had the opportunity to get in on the ground floor of the five-year plan when she was offered the chance to renovate and relocate her Lloydminster, Alberta location. It was perfect timing, she says.

“I joined M&M because I believed in the concept. We ran our original store for five years and kept a close eye on how people’s shopping habits changed,” says Macri. “We were approached in 2016 and presented with the opportu­nity to renovate. The timing was interesting since we were beginning to feel that the look and feel of what we had was falling off-pace with the market. After poring over M&M’s research and projections, we felt it made sense to not just overhaul our store, but relocate as well.”

As the company moves forward, O’Brien says they welcome franchise partners that have knowledge and experience in dealing with the daily household chal­lenges of food.

“We also need people that feel food is not just fuel. It’s more than that. It’s enjoyable and it’s entertaining. They like serving and they like trying different foods. When we launch new products, we want them to be excited about it,” says O’Brien.

His advice to perspective franchisees? Ensure you get into food franchising for the right reasons, before invest­ing the time, effort, and money.

“Start with your heart and find something you love to do, because you’ll be doing it for a long time. If you don’t like food, don’t buy a food franchise,” he presses. “If your heart is not in it, how can you make sure your team is engaged and your consumer believes in what you are doing?”

Second, he says use your head.

“Make sure it’s a business you can make a living doing. Don’t just follow your heart, because your heart can take you down the wrong path. You need to have eyes on both things. Find something you love and then make sure it’s a viable business.”

This view is echoed by Macri, who explains that her decision to become a part of the five-year plan had paid dividends.

“Our network is very tight so when I’m asked whether it was all worth it, I’m fully transparent about everything. It was a major undertaking and a considerable invest­ment. Like any big project, there were bumps along the way but smart planning meant everything worked its way out,” says Macri. “With the dust settled and our vision for where we want to go, I can honestly say that it was worth the increase in traffic, the increase in average basket size and the increase in customer satisfaction. We as a chain needed to modernize and so many of our cus­tomers are blown away with the way the store looks and how easy it is to shop.”

Finally, O’Brien suggests that franchisees get to know the franchisor by spending time in the stores, tasting products, and working with area managers to really get to know the concept. “It’s not like a marriage. A mar­riage…you can end these things. A franchise is more challenging.”

On training and support, O’Brien says that franchis­ing in Canada has evolved, and most companies today have incorporated good solid systems. Beyond initial training, M&M Food Market’s dedicated field trainers work with Franchise Partners after the launch, and they integrate plenty of store visits to stay connected.

O’Brien says that like a hockey team, everyone in the organization has a part to play to foster success.

“A winger can’t play goalie, and the goalie can’t be the coach. Everyone on the team has a job to do, and has to understand what every­one else is doing. I have a tremendous amount of respect for what a franchi­see does. They are making a financial commitment to your concept. They are relying on the leadership and company to make sure that they stick by that investment.”

Part of the goal of the rebrand is to revitalize that commitment and invest in a concept that offers ben­efits to the consumer and the organization.

“Our best franchisees are significantly invested, they work hard and they bring input back to the head office on how we can improve the brand, and we listen to them. It is a team sport. Those that are engaged, those that are investing, they are usually the ones that are winning.”