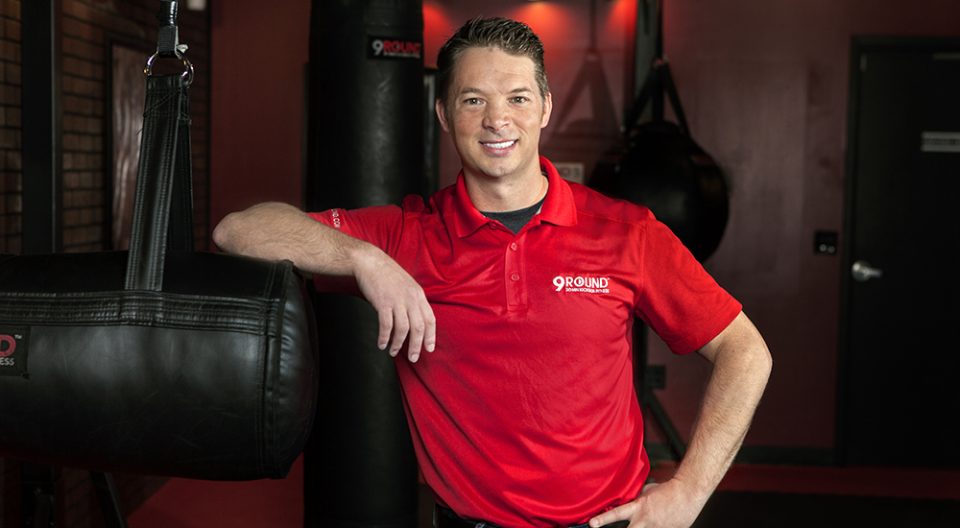 For Shannon Hudson, what began as a childhood interest in martial arts morphed not only into a successful sporting career, it also motivated the former world champion kickboxer to launch a franchise based on the sport. His company, 9Round, has become a global kickboxing sensation, with nearly 800 fitness centres stretching as far as Australia, Turkey, Japan, and even Saudi Arabia.

But none of that was on Hudson’s radar when he was a young boy growing up in Lyman, South Carolina and, like many boys, decided he wanted to learn karate. “I was seven years old and my older brother was doing it, so I wanted to as well,” says Hudson. “I then started kickboxing (a sport combining karate with boxing) and competing at an amateur level when I was about 18. I went professional a few years after that.”

Shannon “The Cannon” Hudson had a successful eight-year run as a competitive kickboxer, peaking when he won the IKF Light Middleweight Kickboxing World Champion title in 2011. But as successful as his kickboxing career was, it didn’t exactly translate into a competitive salary – far from it. “You couldn’t really make a living,” says the 9Round CEO today. “To put it into perspective, I was paid $2,400 for my World Title fight.”

To earn a decent wage, Hudson owned and ran three karate schools with his brother in upstate South Carolina, a business they started in 2003 that’s still owned and operated by Hudson’s brother today. This provided him with the income needed to compete on the side, as well as the business training that would prove crucial when launching 9Round in 2008.

It was at the karate school that Hudson met his future wife Heather, a woman with a strong passion for fitness who was taking karate lessons there with her young daughter. The romantic match turned into a brilliant business collaboration when the young couple set their minds on creating a business that would bridge the gap between kickboxing as sport and kickboxing as a fitness tool.

They zeroed in on kickboxing rather than karate because the latter requires years of training for instructors, which was not exactly conducive to the franchise model they had their eye on. “The karate business is really hard to scale because you have to have instructors with black belts and that takes time,” says Hudson. “Whereas with the 9Round kickboxing concept, you can get fitness-minded people trained very quickly. It’s about big, simple movements that almost anybody can do. So a kickboxing concept like 9Round is much easier to scale than a martial arts school like karate.”

That said, Hudson realized it wouldn’t be straightforward. He knew he’d have to tweak the kickboxing to appeal to a general public looking to get in shape as opposed to diehard purists interested in competitive sport. In short, the workout had to be accessible to a wider demographic and this meant person-to-person striking was out, as was having set class times.

Inspired by the hugely successful Curves franchise, Hudson and his wife Heather turned their attention instead to circuit training, both for its convenience and ease of use. “I said, ‘Let’s make a fitness program like Curves that’s really convenient, that you could walk in, have the trainer plug you into one of the stations, guide you, direct you, and you can do the nine rounds in 30 minutes. That’s where we got the name ‘9Round,’” says Hudson.

The young couple maxed out on their credit card and borrowed $10,000 from a friend to scrape together enough money to open their first prototype: a 1,100-square-foot spot in Greenville, South Carolina that’s still in operation today and is also used for training new franchisees. “We had zero money,” says Hudson, who was only 28 at the time. “We were on a shoestring budget and couldn’t even afford a sign on the building. We just put up a banner.”

As well, it was the middle of what’s come to be known as the Great Recession, and the couple had a newborn at home. “It was very hard. Heather would work in the morning and then I would work in the evening,” says Hudson. “But we had a big vision and big goals.”

The two spent their first year tweaking their fitness concept and reading up all they could on franchising. On the eve of their second year, they sold their first franchise to one of their customers. Five years on, they had grown the business into an impressive 200 locations. “That was when things really took off,” says Hudson. “We started to get a lot of traction and momentum and people really began noticing who we were.”

9Round quickly gained a cult-like following, which Hudson credits in part to the novel business concept: there wasn’t anything in the way of circuit-style kickboxing when they first opened. 9Round filled that void. At the same time, Hudson’s competitive kickboxing experience allowed him to roll with the many punches that popped up when building the new business. He was always able to look to solutions to keep up the momentum.

“I’m a fighter and I never give up,” he says. “You have to have grit and determination because life is punching you in the face every single day. If you don’t have that grit, it’s easy to just give up and then you’re not going to get as big as we did.”

9Round franchisees share this focus and drive and, more importantly, a love of fitness and people. To become a 9Round franchisee, “you have to have a passion for fitness and you also need to love people because above all else, this is a relationship and service business,” says Hudson, laughingly adding, “And you also have to love spandex!”

The trainers all complete an internal certification program to learn the different kickboxing moves and how to teach them. They’re the ones on the floor working with members doing the circuit and play a critical role in the 9Round success story. “The trainers will make or break the business because it’s a very trainer-led experience,” emphasizes Hudson.

Moving forward, Hudson wants to grow 9Round to 1,000 locations over the next two years. In Canada, the company already has 80 fitness centres in all provinces but Quebec, with an aim to build the chain to 200 locations. “Our plan is to keep improving and building our team and hopefully conquering the world,” says Hudson. “While franchising is a relatively new concept in many countries, we’ve found that fitness translates everywhere, so it’s extremely exciting.”

While it took a whole lot more than his world kickboxing title to build his business into the extraordinary success it is today, Hudson is cognizant of the role sport has played not only in his life, but now, through 9Round, in the lives of others. What’s most gratifying, he says, is being able to have a positive impact on others through a sport he loves.

“I’m most happy to have turned kickboxing into a fitness program and to have the opportunity to give people a vehicle to better themselves,” says Hudson. “Kickboxing gave me confidence as a kid and now it’s doing the same for hundreds of thousands of 9Round members. When they feel better about themselves, they perform better at work and they perform better in their lives. So we’re impacting the world in such a positive way and that’s exactly what my wife and I want to be doing.”

Q: What does a franchisee need to make a fully informed investment decision?