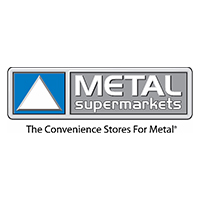 Metal Supermarkets, the world’s largest supplier of small-quantity metals, will open its 100th location on Monday, October 5 with a new store in San Diego, CA.

The newest store is the ninth new Metal Supermarkets location to open this year, with more locations coming in Pico Rivera, CA, Washington, DC, San Jose, CA, Houston, TX and Lewisville, TX by the end of the year.  With a total of 14 confirmed store openings in 2020, Metal Supermarkets will more than triple the number of store openings from 2019.  The company is also finalizing seven more franchise units to open in early 2021.

“We are extremely proud to be opening our 100th store.  This opening marks a major milestone in the history of our franchise,” said Metal Supermarkets President and CEO Stephen Schober.  “Along with the record number of store openings in 2020, reaching the 100-store mark is a testament to the Metal Supermarkets business system, our dedicated franchisees and the demand for our products and services.”

The stores stock a diverse selection of metal types including hot-rolled steel, cold-rolled steel, stainless steel and aluminum in a wide variety of shapes including bar, tube, sheet, plate and more.  Metal Supermarkets offers customers instant access to any metal, cut to size and ready fast, with no minimum order quantity.

During the COVID-19 pandemic, Metal Supermarkets was deemed as an essential service and none of its stores were forced to close due to government regulations.  Some stores increased sales as much as 15 percent earlier this year prior to the COVID-19 outbreak.  Metal Supermarkets has a large B2B customer base with a high demand for metal products needed for infrastructure, manufacturing, maintenance and other services critical to combating COVID-19, including hospital infrastructure and manufacturing personal protective equipment.

Metal Supermarkets was founded by William H. Mair, who opened the first store outside of Toronto in 1985.  The company began franchising two years later with a second store in Scarborough, Ontario.  In 1994, it added its first international location with a store in the Birmingham area of the United Kingdom and then expanded to the United States two years later with a store in Atlanta.

Metal Supermarkets, known worldwide as The Convenience Stores for Metal, is the world’s largest small-quantity metal supplier with 100 brick-and-mortar stores across the US, Canada and United Kingdom. It sells a wide variety of metals including Aluminum, Hot-Rolled Steel, Cold-Rolled Steel, Stainless Steel, Alloy Steel, Galvanized Steel, Tool Steel, Brass, Bronze and Copper. Metal Supermarkets offers value-added services such as Production Cutting, Shearing, Punching and more. Its staff are highly specialized and assists customers in finding the metal they need.  The franchise owners and their staff are metal experts and have been providing quality customer service and products since 1985.