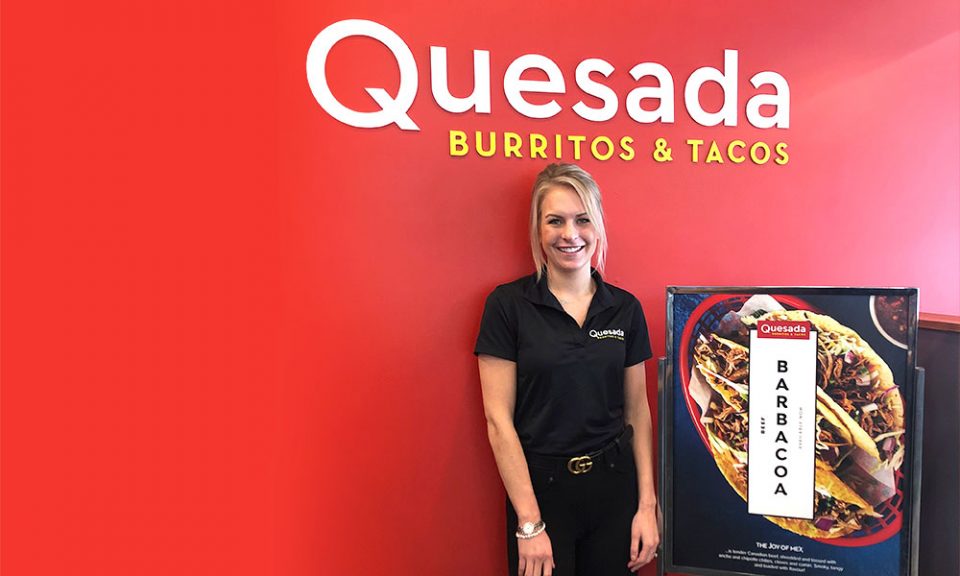 At the age of 24, Lindsey Caron was eight months into owning an independent café and lounge. She had made her business dreams come true, but she wasn’t able to enjoy the success. Feeling overwhelmed, she decided to focus on franchising, and that’s when her life took a dramatic turn.

“I had created a business I loved, but a lifestyle I hated. And that’s what ultimately drew me to franchising,” she explains. “I owned an independent business, which means you do absolutely everything yourself, from creating the menu to marketing and advertising. With franchising, a lot of this is already done for you, and I wanted that. I didn’t want to live in my restaurant night and day; I wanted to have that freedom, and I thought franchising could be the answer.”

That’s when Caron started researching franchise opportunities. With an extensive background in the hospitality industry, she knew she wanted to open her own restaurant franchise. She came across options she liked, but things just weren’t working out. “I strongly believe if it’s meant to be, things will line up. After a few months of these other restaurants not lining up, I went back to the drawing board and I thought about my city of Kenora, Ontario, and what would benefit its residents.”

Her answer was that Kenora should have a Mexican-inspired, quick service restaurant downtown. On the pages of a franchising magazine, she found her answer in Quesada Burritos & Tacos. After the cursory Google search, followed by more intensive internet research and talking to anyone she could about the restaurant, she reached out to the Quesada franchise development team to get more information.

“I sent them a message and received a response, I’m not even kidding, immediately,” she recalls. “The president’s wife was originally from Kenora, so he was so pumped. He flew to town the following week and met me at my café and lounge, and we chatted about the franchise, including my expectations and his expectations. We just got along so well and from there, everything fell into place.”

While Caron felt that fate had intervened, she wasn’t on the home stretch yet – she still needed to get financing for her restaurant. “Being a young franchisee – I signed the agreement shortly after my 25th birthday – I didn’t have a ton of savings or assets. And the savings I had went into my café and lounge, which was under a year old at the time, so I didn’t even have a T4 yet. I went into nearly every lending institution in my town and despite hearing ‘no’ after ‘no,’ I didn’t give up.”

That persistence paid off when Caron picked herself up after her disappointing second-last appointment and went to the final institution with complete confidence. This was her final chance, and she ended up securing the financing she needed. “My advice to anyone is just don’t give up. You don’t need everyone to tell you you’re doing amazing things or to support you – all you need is belief in yourself. If that bank said ‘no,’ I’d still find a way. I wouldn’t give up, because I knew that was what I wanted, and I knew this would make me happy and successful.”

Facing this major obstacle early on helped put things in perspective when more minor issues came up in the early days of running her business, like delays in building the restaurant, and any staffing issues. “I learned a lot from the ‘no’s and the difficulties prior to opening, so when I did open, it was easy to think long-term instead of short-term at that moment.”

Beyond the business challenges, Caron had to adjust to her new franchising lifestyle, which was a far cry from that of her friends. “I went into hundreds of thousands of dollars of debt and I was only 25 years old. I couldn’t go out to restaurants with my friends, I couldn’t go to the bar, I couldn’t go on vacations to Mexico with them. So that was a huge transition for me. When you go into business at a young age, there is a little bit of sacrifice, in the hopes that long term, you come out ahead and you have to sacrifice less in the future.”

Caron says her leadership role as a young business owner has been bolstered by creating a strong team environment at her location. “It’s always about working together and not necessarily having that barrier between employee and boss. I have employees who are older than me, the same age as me, and younger than me, but we work together, and it’s a team environment. If you treat them with respect, they’ll treat you with respect.”

Quesada’s strong training program and regular updates help ensure Caron has the tools she needs to succeed. “We just recently launched a training app for franchisees and for our team members, which keeps us aligned across the board. They also update the operations manual every year, which I’m obsessed with, because I love everything in writing. You can make adjustments in your own restaurant, but it creates a standard across the board that these are the general expectations,” explains Caron.

“Another favourite is just having somebody, I have my main contact at head office, to bounce ideas off of, ask questions, and get advice from. Just having that second set of eyes on your business is extremely helpful,” she adds.

Caron is a go-getter who has embraced every challenge that’s come her way. So how does she stay so positive? “I purposefully surround myself with people who inspire me, who motivate me, who relentlessly chase their goals,” she explains. “My greatest inspiration is the people I aspire to be like and learn from in some capacity. They have something I want, and if they have it, they know how to get it, so they can help me get that, too.”

For those looking to follow in Caron’s footsteps, she advises that you start your journey with a lot of thorough research to ensure you’re making the best possible decision. “You need to do your research on the industry, on your market, and on the franchise, and ask questions. Also, pick a franchise that’s awesome! Do something you love. You need to believe in the product you’re selling.”

While Caron has certainly faced her fair share of challenges as a young business owner, she’s quick to point out that franchising can also bring big rewards. “My experience has been so good. Ultimately, what I enjoy most about having a franchise is the freedom it provides me to pursue other things in my life that I’m passionate about. For me, instead of owning multiple Quesada restaurants, I chose to open other businesses, as well,” she says.

Beyond making her Quesada franchise the best it can be, Caron says she has big plans for her future. “I want to continue working on my other businesses and to empower people to create the life that they envision. That’s what I’m really passionate about – helping other people achieve their dream life, just like I have. Franchising has been one of the best decisions I’ve ever made; it’s great to be part of something bigger and to have a support system and a family that’s helping you succeed, not only business-wise, but personally, as well.”

Day in the Life: A Franchising MVP

Next Generation in Franchising: Spread Your Wings