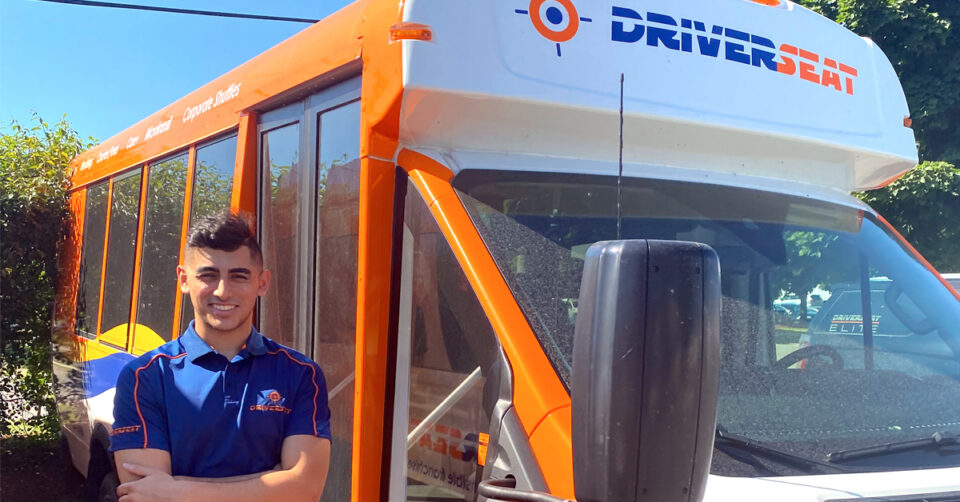 Driverseat’s 20-year-old franchisee Abiahjit Kular is gearing up to open nine territories in his B.C. community

Franchise Canada has always sought out stories of inspiring entrepreneurs who made their dreams come true with franchising. Most find themselves at pivotal moments along their journey: the first year, multi-unit expansion, milestone moments, and more happy success stories.

But for new Driverseat franchisee Abiahjit Kular, the success story starts at the very beginning of franchise ownership: in the first months before a franchisee officially opens their doors, when excitement is high and opportunities are fresh.

As Kular explains, his journey in franchising may be in its infancy, but his success as an entrepreneur is years in the making.

As a 20-year-old, Kular is firmly a member of Gen Z, and he certainly fits the profile for the next generation in franchising. But don’t let his age fool you—he recently secured nine Driverseat territories across B.C. and is ready to take on any challenges that come with franchise ownership.

“Driverseat’s goal is to become the household name in transportation,” Kular explains. “We’re looking to provide for people that need group transportation from events and locations such as winery tours, airport shuttles, wedding transportation, and Care+ for the vulnerable sector, including the elderly and children. This is a service that is needed extensively in our region. There’s absolutely no private shuttle services here and there’s been a large demand for them.”

Each of Kular’s nine territories has about 100,000 people within it, which is how Driverseat determines its distribution. He owns one territory each in Abbotsford, Mission, and Chilliwack, with two in Langley, and four in Surrey. He’s starting with opening Abbotsford, Mission, and Chilliwack, followed by the other six locations in the coming year, focusing on servicing these smaller markets and growing the business steadily over the next 12 months.

At the time of writing, Kular is in the preliminary stages of obtaining his licence from the B.C. Passenger Transportation Board, but anticipates making his first trips by the end of this year. “As soon as I get my licence, I’m super excited to get my chauffeurs (drivers) going. You can’t provide group transportation for a fee without a licence, so we could do all these trips for free, but we want to charge our service fee, of course.” He’s the second franchisee to open in British Columbia, as another franchisee officially launched their services in Kamloops, B.C. in October.

Like many others before him, Kular had a big decision to make when he decided to pursue business ownership through franchising. And with brief stints in other businesses behind him, it speaks to the nature of success that franchising can provide to aspiring entrepreneurs.

During his first year of university, Kular started a small sports academy, which he’s been growing ever since. “I love doing it and I’ve grown it to about 20 club teams now, which is awesome,” he explains.

“Entrepreneurship has been something that I’ve always been a part of,” he adds. “In middle school, I was selling video games and candy out of my locker.”

After finishing his third year of university, Kular decided to team up with his father, who has years of experience in the transportation industry. “Courier services, delivery, Uber, taxis: you name it and my father’s done it,” he says. “This opportunity [with Driverseat] came up and now that my dad has some free time, he wanted to start up his own business. He’s an immigrant from India and has tons of expertise in transportation, but he just needed some help, so we talked through this opportunity together.”

When it comes to why he chose franchising over going into business alone, Kular says, “the main reason is just for all the guidance and resources I’m able to access. They have an established recipe that’s worked in multiple locations. Plus, they have great coaching and are able to help me whenever I need assistance. Having such a supportive team and great resources really intrigued me to go into franchising. I don’t think that if I went into business by myself, I would achieve as much success. They know what to do, and how to help me do it.”

Pedal to the metal

As any franchisee knows, the start-up process, from the first meeting, to signing papers, to official opening day, can take months (or years!), but the tools and resources can certainly make it worth the wait when compared to going the entrepreneurial route alone.

“I could have never done this without the franchise system behind me. There’s so much to it—sales tactics, marketing tools, and many other resources to learn and develop. For example, our technology: we have a platform where we can track all the shuttle vehicles [on route], including a review on their level of driving for safety purposes,” says Kular when reflecting on why he chose the brand.

He adds, “Just to have all this information, I feel like it’s been so crucial for me. Now if I have a problem, I have all these years of expertise and multiple people [to help me out]. They’ve taught me so much; it really does excite me how much more they have to teach me.”

While he’s still in the licensing stage, eagerly awaiting the day they can officially open the doors and start the engines, Kular spends his days sending emails to other local businesses to create connections within his community. This networking will prove useful to get the word out to businesses such as wineries and breweries about how Driverseat can help fill a gap in the shuttle services within their areas.

“Right now, my goal is to get the name Driverseat out as much as possible before we actually get up and running. Creating connections, trying to get the word out, making posts, things of that nature, to get people excited about the idea of [my business].”

He adds that it’s fortunate that Driverseat has already established itself as one of North America’s fastest-growing brands, as up-and-running franchises in other provinces have proven to act as connections and sale-makers. “I’ve had tons of emails that say, ‘hey, I’ve used your service in Ontario, can I use it at your location now?’ Driverseat has done a lot already and having all these resources—it’s going to be really big for me while growing my brand.”

With Kular being new to both the franchising and transportation industries, he knows he’s one of the youngest of the bunch and may have some obstacles to overcome along the way.

“[Based on a] first impression, you may see that I’m a younger kid, and don’t really know if I have it in me to be able to persuade you to like the concept of Driverseat,” he explains. “So it’s been a challenge for me to mature a lot quicker [than my peers].”

For example, while he could once show up to class in a hoodie, jersey, or any other casual outfit, now Kular says he really has to think about the attire he wears to business meetings. How he presents himself is more important than ever as a business owner in a growing industry.

But these challenges are nothing compared to the potential that’s to come.

Kular notes that franchising inspires him by allowing him to provide people with the opportunity to make a living through his business. Driverseat’s shuttle buses are driven by qualified chauffeurs who must adhere to high standards, and it’s a great job to be employed in.

“Something that I’m really eager to do is provide more jobs in an industry that’s very limited in our area,” he says. “I’m super excited about this unique franchise I’m going to bring to my hometown.”

At the end of the day, Kular’s up-and-coming franchise journey is all about being bold—hence the nine territories under his belt.

Reflecting on his high school yearbook quote— “If you’re not going to go all the way, why go at all?”—Kular says he believes that you need to go all in if you believe in the concept of a franchise brand. Which is exactly how he feels about Driverseat.

Wonderful Waxes and a World of Opportunity

Q: What are the risks of purchasing a franchise in a newly launched franchise system?

A New Suite of Opportunities