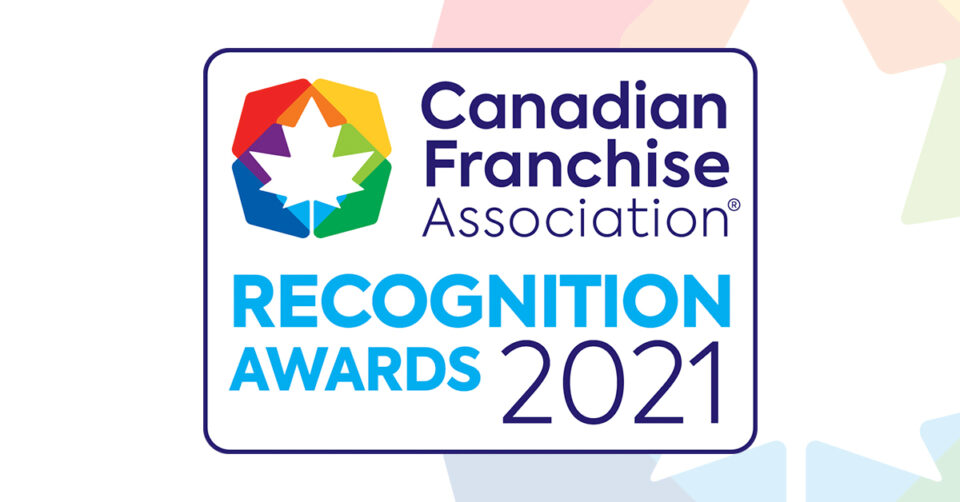 The CFA’s Recognition Awards celebrate individuals and franchise systems for their outstanding achievements, contributions, and philanthropic endeavors within the franchise community.

The Distinguished Franchise Support Service/Supplier Award recognizes a person or company for their efforts and contributions in supporting the franchise industry and the Canadian Franchise Association at large. Elements taken into consideration include:

The Diversity and Inclusion Award recognizes a company or individual for extraordinary leadership and contribution towards improving and promoting diversity and inclusion within their workplace and the franchise community in Canada.

The Hall of Fame Award is presented to a CFA member franchise in recognition for outstanding performance. Winners typically have strong brand recognition and solid business performance. They exhibit leadership in the franchise community, including helping to encourage excellence in franchising through the sharing of best practices, speaking engagements, mentoring other members of the community, and raising the profile of franchising.

The Lifetime Achievement Award recognizes exceptional achievement and contribution to Canadian franchising and the community at large through demonstrated excellence throughout one’s lifetime and career in franchising.

The Outstanding Corporate Citizen Award is given to a franchise system that has demonstrated genuine and ongoing concern and support for a community or social service group(s). Award recipients are selected based on their philanthropic innovation, support, and impact to the community whether on a local, regional, national, or global scale.

The Volunteer Leadership Excellence Award is presented to an individual who embodies the spirit of passion and leadership in their volunteer activities with the CFA.

Distinguished Franchise Support Service/Supplier Award: As You Like It Marketing

Patti Hone and her team have been serving the franchise industry for more than 30 years through their full service, multi-disciplinary branding and design marketing agency. As You Like It Marketing is a true advocate of franchising, having worked with more than 100 systems and supplier members. Hone has also dedicated countless hours on CFA Committees and has spoken at a number of CFA events, both virtually and in person.

At Driverseat, diversity and inclusion are more than a practice—they’re built into the culture of the organization. The senior leaders at corporate meet monthly to discuss diversity, equity, and inclusion (DEI) initiatives: podcasts to promote, cultural events to prepare for, and voices they want to amplify. They’ve released initiatives to support Black History Month, Women’s History Month, Indigenous History Month, and Pride Month. During each event, they highlight entrepreneurs, team members, and leaders, giving them a space to celebrate their accomplishments and challenge inequality. Internally, the company takes initiative for diversity training and education. Driverseat believes that creating dialogue about differences, challenges, and biases is pertinent to their position of allyship, and ensures that their audience knows that they’re an organization committed to inclusivity.

The UPS Store services individuals and small businesses in need of printing, shipping, mail and parcel receiving, and other business services. Franchisees of The UPS Store network enjoy training and ongoing support from experienced home office and in-field teams, from grand opening and beyond. As a global brand operating in 220 countries, The UPS Store has more than 300 franchisees in Canada and enjoys a strong brand reputation. The company is an active and immersed member of the CFA, and its team participates in mentoring, speaking events, lead generation, and by serving on the board of directors. The UPS Store is proud to have been designated as an essential service during the COVID-19 pandemic.

Peter H. Thomas was one of the leading real estate developers and lenders of his time in North America, developing several billion dollars of projects, including shopping centres, apartments and condominiums, land assembly, and golf courses. He brought the franchising rights of CENTURY 21 Real Estate to Canada, growing it for more than 13 years into the largest real estate network in the country. He also founded Samoth Capital Corporation (now known as Sterling Centrecorp Inc.), and developed the Four Seasons Resort in Scottsdale, Arizona. Thomas and his team at Thomas Pride International continue to be actively involved in real estate acquisitions and developments in the Phoenix and Seattle markets. Additionally, he’s brought another franchising opportunity to Canada: the dog daycare business Dogtopia, which operates in more than 150 locations across Canada and the US.

Since the creation of its foundation in 2002, Mr. Lube has raised more than $4 million to support many causes across Canada. At Mr. Lube, the second weekend in May is known as MS Weekend. Since its inception in 2007, $2 from each oil change at every Mr. Lube store on MS Weekend has gone to the MS Society of Canada. During the entire month of May, local stores also proudly participate in local MS fundraising initiatives. So far, more than $350,000 has been donated to regional and national programs to fight multiple sclerosis. Since 2000, the Mr. Lube Kids Drive has also raised $1.1 million for local and regional projects that benefit the lives of children. The foundation’s new goal is to reach the $10 million mark in their giving.

Joseph Adler has always been an active participant in CFA initiatives, supporting the Association’s advocacy work and commencing the revision of by-laws when the Not-for-Profit Act changed. Adler has been a key driver of the “Canadianization” of the core content in the Fran-Guard course for the CFA’s Certified Franchise Executive (CFE) Certification Program. Working closely with CFA staff, he has spent countless hours building, reviewing, and critiquing course content for accuracy and user-friendliness, to ensure that the CFA’s first CFE course was successful and engaging. Previously, Adler served as the General Counsel for the CFA and spent more than eight years on the CFA Board of Directors.