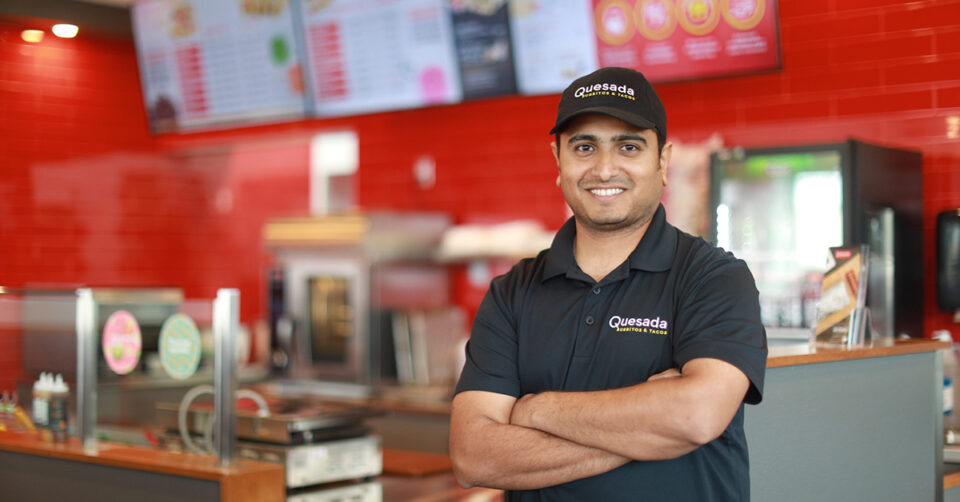 How first-year success led to the expansion of three restaurants in Surrey, B.C., for Quesada franchisee Daksh Patel

When Daksh Patel opened his first Quesada Burritos & Tacos location in June 2019 in Surrey, B.C., he owned two pharmacies in the city. On the surface, it appeared that his time was already stretched thin enough. How would he be able to make his foray into the restaurant business a success?

The answer: hard work and a lot of help. And now, looking back at that first year, it was definitely all worth it, he says. By December 2019, sales at Daksh’s first Quesada were growing steadily. In June 2020, during the height of pandemic restrictions, he opened a second store in Surrey, and then a third in June 2021.

It wasn’t easy finding such rapid success, especially with an already thriving pharmacy business, but it helped that he chose Quesada, he explains. “I was always fascinated with the food industry and wanted to get in, but when I looked at other food franchises, I found the process wasn’t as easy and the demands on my time would’ve been a lot [greater]. Quesada was also really welcoming and they’re one of the fastest growing franchises.”

In 2020, the Globe and Mail recognized the quick service restaurant franchise as one of the top 400 fastest growing companies in Canada. In 2012, there were just 10 Quesada locations across the country. Now, there are more than 150, and they’re found in nearly every province.

But according to former Quesada president Tom O’Neill, Quesada isn’t looking to be the fastest-growing or largest chain. “[We] want to be the first choice among consumers, and that means focus on quality and taste,” he said in a 2013 interview with QSR Magazine.

When Steve Gill and his brother Greg founded Quesada back in 2004 in Toronto, it was one of the first restaurant franchises in Canada to spark the burrito trend while also offering a fresher, healthier, whole food experience. Burritos are still some of the most popular items, but the restaurants also offer tacos, quesadillas, burrito bowls, nachos, and more. Much of the menu is prepared with house-made salsas, house-cooked rice and beans, and house-roasted tomatoes and peppers.

The food was one of the main reasons why Daksh chose Quesada back in 2019. He and his entire family are huge Mexican food fans, and he appreciated that the menu options could be nutritional as well, he says. “We even roast the chiles to make our salsa from scratch. And being a healthcare professional, I always prefer freshness and healthy options. So, it was just the way to go for me.”

Cooking that fresh food and hearing positive reviews from customers were two of the most enjoyable parts of his first year in business, he says. There were no Quesada locations in his area of Surrey at the time, so it was the first chance that most of those customers had to try the food.

Many of them would return again and again for the same items but would try new favourites too, says Daksh. “Quesada does a great job of changing recipes, adding new items, and [promoting] limited time offers.” They often switch up protein offerings, like different types of pork, beef, or drunken chicken, and offer a rotation of vegan and healthy options as well. “That tends to bring in a lot of different types of people. Head office spends a ton of money on marketing, and that’s been great for us.”

Head office also prepared Daksh properly to be a franchisee, he says. There was an initial three-day training session at a Quesada location in British Columbia just to give him an idea of what to expect at the full training in Ontario. Once there, the 14-day educational program encompassed everything he would need to know to run his restaurant, including cooking, cleaning, operations, and more.

Daksh also found that the ongoing training and support has been solid. The company has an online portal for franchisees that includes information on almost everything franchisees need to run their business. There is also a help desk for franchisees to call or email, which responds quite fast, he says. “Plus, some of the people who work for the company give out their personal numbers so that you can contact them at any time if you need help.”

All of that support served Daksh well in the first year in business, but still, there were some challenges to overcome. Chief among them was location. Because his store was the first Quesada in the area at the time, people were unaware of the restaurant and were hesitant to visit. The first few months in particular were slow, he says.

But then head office put its marketing efforts into full gear, supporting a Facebook marketing campaign, a local flyer advertisement, and a grand opening sale where any customer who walked through the door over two days would receive a free burrito. “After all of that, we were doing great,” he says. “By the end of 2020, that store was one of the top 10 stores for sales in Canada.”

However, before hitting that mark, Daksh had to make it through the early days of the pandemic, which were hard on the restaurant. “We actually had to shut down the restaurant for about a month in April 2020 just because customers were scared to visit and we wanted to keep staff and everyone safe. We just didn’t have a clear picture of what was going to happen.”

By May, though, the restaurant was back up and running, and Quesada’s marketing team went to work securing deals with SkipTheDishes, Uber Eats, and DoorDash. In about three months, sales were back to normal and Daksh had opened his second location in Surrey.

Now he has three Quesada locations, which actually isn’t that rare for franchisees. About half of all Quesada franchisees have opened multiple restaurants. Still, it’s taken a lot of hard work and dedication to the business to get here, says Daksh—which is one of his main pieces of advice for new Quesada franchisees. “You have to focus on the business,” he says. “For example, when I started the business, I had to hand over my pharmacy businesses to my brother so that I could dedicate myself to Quesada in that first year. That’s very important.”

He also says that to find success with Quesada, you have to follow the guidelines provided by head office. That, coupled with the public’s growing affinity for fresh, healthy food, will keep people coming back for more. “I can definitely say that you can make money with this business. Customers love it, they love that it’s fresh and healthy and that there are lots of options for them. So, it’ll work out.”