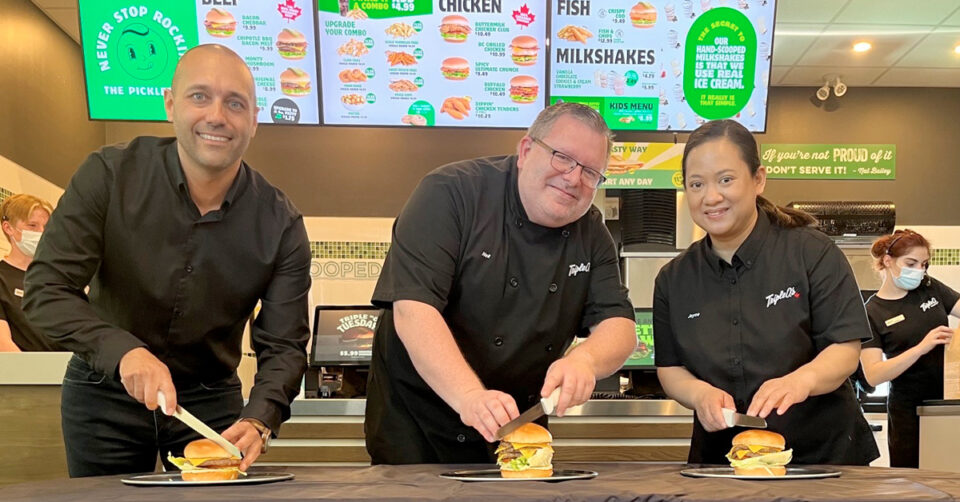 It all started with a man and his truck. In the roaring ’20s, the era of business innovation, moody jazz, and rousing sock hops, entrepreneur Nat Bailey converted his Model T into a travelling lunch counter and set up at a Vancouver lookout point.  He went on to open White Spot, Canada’s first drive-in restaurant. The chain eventually expanded to include dine-in services, and in 1997, it opened its first quick service restaurant, Triple O’s, named after White Spot’s legendary secret Triple “O” sauce. Today, with more than 90 years in the food industry, the franchise serves 17 million guests per year at over 129 locations, with outposts across Canada and as far and wide as Singapore and the Philippines. In keeping with its mobile-friendly roots, Triple O’s also has five ‘On the Go’ food trucks.

Franchisee Neil Turkington was working as a national food services manager for Parkland Fuel when he first encountered Triple O’s at a Chevron station. Turkington, who’d been exposed to a variety of quick service brands at stations across the country, was intrigued. “I just kind of fell in love with the brand,” he says. When the company began strategizing about expanding the brand to Ontario, things fell into place and Turkington became one of the first Triple O’s franchisees in the province.

Before committing, Turkington’s wife insisted they taste the product. Still living in Montreal, Quebec at the time, they ventured to the closest location in Mississauga, Ontario when pandemic restrictions began to lift. “We ordered one of everything and sat in the parking lot and had a dashboard buffet,” he says with a laugh. By the end of the meal, she was sold.

A move from Quebec to Ontario came at the perfect time, bringing them closer to their extended family post-pandemic. “With everything going on in the world, a lot of people took a step back while for others it was a ‘no time like the present’ attitude. We’ve learned a lot from the pandemic,” he says.

Though opening a restaurant at the tail-end of the global crisis raised a few eyebrows, Turkington was undeterred. “It was a bold move, and obviously, I didn’t have a crystal ball,” he says. His first location in Colborne, Ontario opened on April 1, 2022, and is conveniently located off the highway near the ‘Big Apple,’ a famous roadside attraction. With the flourishing local tourism and his love for the premium burgers, fries, and hand-scooped milkshakes, and casual and authentic West Coast dining experience, Turkington sensed the business was poised for success. The location soon flourished, and he recently opened a second site in Toronto’s North York suburb in September.

Despite being well known on the west coast, one of the brand’s challenges is garnering brand recognition in Ontario. “It’s non-stop, explaining what we are all about and what is special about us. It makes us brand ambassadors, me and my team. We’re helping build the brand here, and we’re excited to tell the story of Triple O’s,” explains Turkington.

West coasters flocked to the Colborne location when they learned of the opening, lining up for a taste of home. “We’re a small town, and they never expected us to be here. Every weekend, we have people coming in. This is a taste of a lot of people’s childhoods. There’s such a big brand significance in B.C., it’s everywhere. It’s a taste of nostalgia.”

Turkington says the opening was an unprecedented success, with much of the menu selling out quickly. “The community watched us being built for almost a year and were just waiting. The day we opened was probably the most insane restaurant experience I’ve had, and I’ve been in this business for almost 30 years.”

Part of leading a pioneering brand is helping distinguish it from established restaurants in the market. “There’s a lot more of building the business with brand awareness,” notes Turkington. “With the big brands, when you put an ad in the paper, employees know what they are applying to. I spend the first 10 to 15 minutes of every meeting explaining what we are all about because I want to get people excited about the brand. I spent most of my summer in my actual dining room just talking to customers and hearing their stories about White Spot, which made me feel better as a franchisee knowing I picked a brand that had that kind of customer impact.”

In addition to serving 100-per-cent fresh Canadian beef burgers, fresh-cut Kennebec fries, and hand-scooped milkshakes, Triple O’s also offers additional menu options to suit a variety of tastes. Fresh lettuce wraps, grilled chicken, and plant-based and vegetarian options cater to every lifestyle. “There’s a sense of pride that you can stand behind the quality of the product,” says Turkington.

In an industry where taste and service are king, he endeavours to provide the best experience possible each and every time. “I want my guests to come back because they know they’re getting a premium product at a premium price, and they know they will eat well and that it’s fresh.”

Turkington says despite the company’s larger size, he enjoys the collaborative, family-friendly feel. “You know everyone at head office by name and they know who you are. It’s a little easier when you’re taking such a big risk, bringing an unknown brand into the market. They really try to help you build that brand, so it feels like a partnership.” He adds that feeling supported and included really resonates and creates a sense of pride in the product they’re serving.

The initial four-week training takes place at the Mississauga location, where franchisees learn the technical and hands-on aspects needed to grow the business. “I’ve been on the training side for other companies, so I got to see things from a different lens,” says Turkington. “It was interesting in the sense that I could see that I had a turnkey program for every little aspect of the business and was never left questioning what was next.”

He adds that with a seasoned background, he knew there would be less of a learning curve. He was surprised and pleased to learn that the steps he’d anticipated being responsible for were already taken care of by the brand. With a strong system in place, he’s confident that prospective franchisees without a restaurant background would fare equally well when investing in Triple O’s.

He adds that a great team and unparalleled support during the first opening had a strong impact on the early success. The brand was adept at anticipating needs and providing additional training staff during the initial surge. “We were very well supported. By the time it tapered off and we got our legs underneath us and the volume slowed down, we knew the honeymoon period was over,” says Turkington. “We got more into some standard sales, and we felt a little bit more comfortable. All the while, we were constantly supported with check-ins.”

He anticipates that as they continue to grow, sales will increase as brand awareness rises. The brand, after all, has received many accolades, including recognition as one of Canada’s most iconic brands and best managed companies by Interbrand Canada. “I’ve had early success, which is great, but it’s still going to be a long road to develop. It’s not a set-it-and-forget-it business.” Taking care of the business includes building long-term commitments with local guests to help propel the business forward.

“This is a passion brand. I don’t think there’s a better term for it. You have to be passionate about it and want to tell that story because being passionate about anything goes a long way to success.”

Turkington adds that it’s a hands-on job to build a team, and that good hospitality leads by example. “You have to push that kind of over-the-top service, or you know you’ll get what you get, so being present and just being involved is important.”