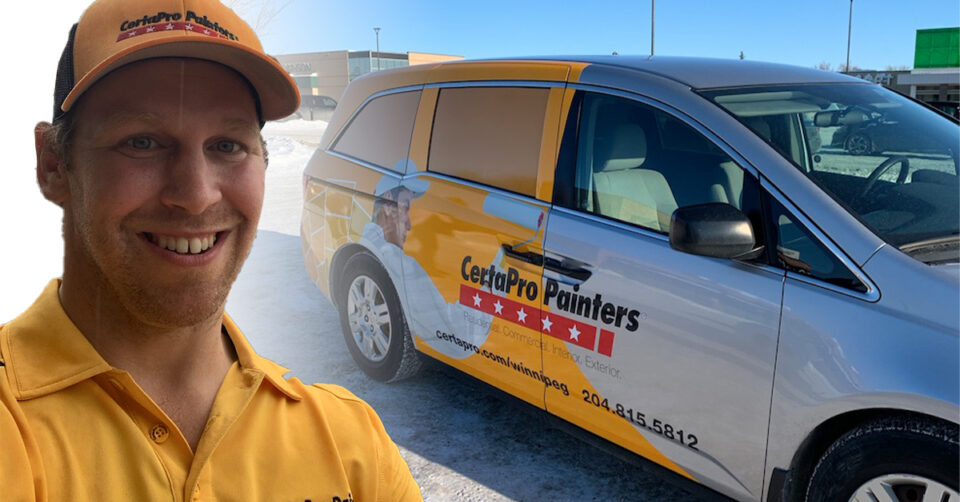 Canadians interact with franchises every day, and many of these brands have unique and catchy names that act as great conversation starters. Among those with snappy brand names is CertaPro Painters, a residential and commercial painting company that provides professional painting services for projects of all sizes.

CertaPro has been in business for more than 30 years and is committed to “providing certainty in an industry that’s notoriously unreliable,” explains franchisee Ken Ferguson. “In general, trades, and especially painters, often have a reputation for doing things on their own schedule, not returning phone calls, et cetera. CertaPro is trying to be the opposite of that. The ‘Certa’ in CertaPro [stands for] certainty.” A clever brand name indeed!

“We try to make people feel at ease and relaxed from the beginning. We have some unique things that are specific to our brand that takes the concept of certainty to the next level,” he adds. “We’re providing certainty not just for our customers, but also for the painters. We’re trying to create certainty and trust that we’re going to deliver on our promises.”

Having just wrapped up his first year running his Winnipeg, Manitoba-based location, Ferguson notes that CertaPro was pivotal in his franchise success, helping him exceed business goals right from the start.

Ferguson joined the CertaPro brand with both painting and practical, hands-on business experience, which made for a smooth ride into franchise ownership.

But, he notes, anyone can go into business with CertaPro—even if their only previous painting experience comes from DIY projects.

Nor do they need a post-secondary degree. Ferguson says he didn’t end up finishing university, though he did gather some valuable experience while there. “I ran a student painting franchise while in university, and it gave me a lot of business experience. Because I did that and I performed well within that structure, I ended up becoming a regional manager,” Ferguson explains. “That allowed me to gain a lot of experience with selling, conflict resolution, leadership, and other things that go along with running a business. And then I transitioned to a general manager role, which was actually almost like being a franchisee.”

After that, Ferguson says he dipped his toes into the commercial real estate world for a little bit as he continued his career journey.

Fast forward eight years to deciding to go into franchise ownership, and he says that CertaPro just seemed like the right fit. “I looked into other [brand] options and I felt like the culture [at CertaPro] was a lot stronger. The overall performance of the business is a lot better. Every company has their core values. But what I learned about CertaPro is that they really mean what they say, specifically with respect to continuous improvement.”

Ferguson explains that as part of the onboarding, CertaPro provides a “a really well-done learning experience online through Zoom.” Typically, training would’ve been completed at head office in Philadelphia. But due to COVID, the company was able to pivot effectively to online platforms while onboarding new franchisees across North America.

“They got me connected with a general manager who’s specialized for the startup process. And this is another really cool feature about CertaPro: I’m used to seeing businesses get kind of lumped up geographically, like in central Canada or western Canada. Rather than matching you with geographic similarities, CertaPro matches you with people who are at the same stage in their business,” he says.

Thanks to his previous experience and familiarity within the industry, Ferguson was able to fast-track some of his initial training while getting ready to open his doors. He explains that head office onboarded him into a more advanced group of franchisees fairly quickly, connecting him with those who have been operating their businesses for a bit longer.

Brush off the challenges

Ferguson says that he still faced some challenges when getting his business up and running. “I think that sometimes when starting a business, people can be tempted to move fast and skip steps. They just want to open the doors and start collecting revenue. That was a challenge: getting all the right insurance in place, all the certifications, equipment lined up, getting everything branded, and making it feel like this is a CertaPro franchise, not just a guy painting stuff called CertaPro. Really getting the brand launched well was challenging for me.”

Luckily, head office had partnered Ferguson with other franchise owners facing the same difficulties and growing pains, and he says that it was incredibly helpful to be surrounded by a group of people jumping through the same administrative hoops and navigating red tape at the exact same time.

“[CertaPro] has a great culture. It makes getting up and going to work really easy,” Ferguson says. “The systems they have in place for marketing sales are incredible. We very easily differentiate ourselves from the competition. We stick out and we’re different. People want to work with us and sales aren’t hard with this brand. And as a result, the biggest challenge is building the operation as quickly as the sales come. It’s a great problem to have.”

Ferguson’s experience has been “extremely rewarding,” he says, adding that his franchise is “already the most recognized painting company in Winnipeg after one year of operation.”

Achieving this accomplishment is due largely to the company’s reputation and initial training, he adds. “You’re able to have a turnkey business going pretty quickly.”

And that’s not all for Ferguson’s new business wins. He adds that his first year of revenue was more than $500,000—all while getting his franchise up and running! This year, his business is trending towards more than $1 million in revenue.

It also helps to be surrounded by long-term thinkers, he says. “Sometimes with running a business, it can be really easy to just get focused on getting things moving a little bit too fast. I had people coaching and mentoring me who said, ‘Hey, this is a marathon. Don’t think about this summer—think about what you want this business to look like five to 10 years down the road.’ There’s a lot of wisdom and good business acumen all the way throughout the company.”

When it comes to advice for finding success with franchising, Ferguson says to consider that there’s a lot of saturation in the franchise market. When you narrow down your search to one brand in particular, he says, you should figure out what makes it special and fully understand its differentiators and economic edge before putting pen to paper.

After that, “make sure that you’re financially stable going in. We had the luxury of not panicking due to ups and downs in revenue, which allowed us to do things the right way and exceed our goals,” says Ferguson. “It could be really tough for people looking to franchise if they scrounge up their last couple of dollars to pay the franchise fee and then they can’t live for the next year, right? Having a mindset of availability while starting a business is a lot of work. But if you have the right mindset for it, it’s one of the most rewarding things that you can do.”

A Day in the Life: Making Business…Personal