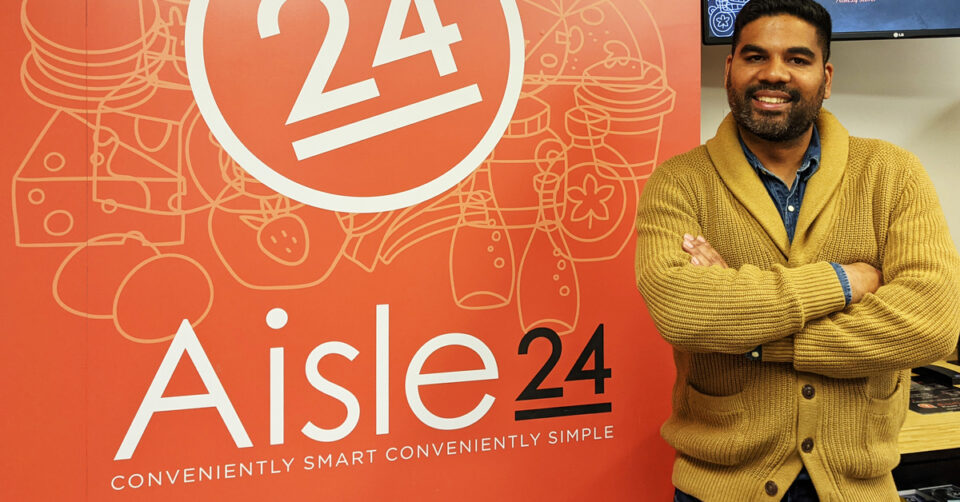 When the global pandemic called for social distancing in March 2020, Aisle 24 Markets was uniquely positioned to succeed. As a self-service, contactless grocery store franchise, Aisle 24 provides customers with a variety of products ranging from food staples, such as milk and bread, to home goods and personal hygiene products, through a technology-enabled retail self-service model without the use of any cashiers.

David Thomas is the first franchisee of this innovative system. He opened his 600 square foot location in a pair of conjoined apartment buildings in midtown Toronto just before the pandemic hit — and the country was thrust into a frenzy of toilet paper hoarding and shortages at the grocery store. While some might consider this bad timing for a new business venture, for Thomas it was the perfect opportunity.

Thomas was first introduced to Aisle 24 at The Franchise Show, where he met the system’s founders. “I was drawn in by how simple the idea was and how we would be able to take that simple idea and enhance it,” he recalls.

He was also interested in the franchise because it had a huge technology component. “It’s refreshing to be part of something brand new,” says Thomas. “This is the future and I’m really excited to be a part of it.”

Previously, Thomas had been working in the corporate world as an investment advisor, a role that left him unsatisfied. “In everything that I did, I always felt like I wasn’t getting recognition for [my] efforts or someone else was taking the credit,” he says. “I like being able to have my stamp on something and also that freedom of knowing that all my efforts will lead to something positive.”

Not your typical nine-to-five job

Usually, Thomas gets an early 6 a.m. start to his day. The first thing he does is log on to his computer and review the transactions and sales from the night before. Then he moves onto answering emails and, unless it’s a delivery day, he’s all done after about an hour. “The interesting thing about Aisle 24 is the technology; a lot of the tasks that I do can be done at home,” he explains. “If there are any issues, I get them emailed directly to me, and we have a really great customer service team that takes care of any technical issues.”

Delivery days are a little different. Two to three times a week, Thomas will head into the store, also known as his “office,” to await deliveries of stock. While he’s there, he’ll sanitize and clean the whole place as well.

This isn’t a typical Monday-to-Friday, nine-to-five job: Thomas works seven days a week. However, he says that it adds up to a total of 20 hours a week, which includes administration duties such as purchasing, ordering, and talking to customers via email or text if they have any issues.

When the franchise first opened, the pandemic was in its early days, so Thomas was still able to spend a lot of time at the store talking to his customers. “Our store is automatic and it’s technology-based, so I wanted people to know that there was a person behind the store,” he says. “I spend as much time that I can there without it being unsafe because I enjoy that face time with people.”

However, Thomas points out that “COVID-19 has changed the way that everyone has to do business.” For himself, he had to increase the time he spends cleaning and sanitizing. Since the app tells him which days and times tend to be busiest, he can plan his store visits accordingly, and sanitize everything when there are the fewest people coming in.

One of the challenges that Thomas had to overcome at the very beginning was making sure everyone had access to the store. Since the store concept is app-based, they had to find a workaround for individuals who either didn’t have, or didn’t know how to use, smartphones. “The technology aspect makes this franchise amazing, but sometimes it can be a hindrance to the people who use the stores, so we found another way to provide them access,” Thomas says. The solution was to provide customers with key fobs, which give them access to the store without using the app.

Since Thomas doesn’t have experience in the retail or convenience store industry, he draws on his job experience to succeed day to day. His investment sales background taught him the most important skill for his success as an Aisle 24 franchisee: customer service. “Even though we are a technology company that offers a service, you should always know who your customers are, and you should always put a face to the product,” says Thomas. “You don’t need to have any experience in the convenience store industry but enjoying talking to people and having that customer service experience is a big plus.”

Like many franchisees, Thomas says that one of the biggest benefits of being part of the system is that he doesn’t have to set everything up from scratch. “If I had to build this idea out, it would take years, but the founders built this amazing structure and platform that has allowed me to learn from them and their mistakes, and have the right tools for success.”

Thomas says another benefit is that the Aisle 24 app technology is always improving, they’re always looking for new and better ways to interact with the customers, and they’re exploring new store locations for the future. “I wanted a franchise that would constantly be looking towards the future and growing with the community, so that’s one of the reasons why I love the franchise so much,” he says.

There’s always someone available at head office to help Thomas with everything from technology issues to supply and distribution problems to support with the lease agreement. “There is somebody who can help me figure out the best and most efficient way of solving that issue because either they’ve already had it or they know who can fix it because they own stores themselves,” says Thomas. “And the great thing about it is I can call directly on their cell phone, I know them by name, and it usually resolves within the same day.”

Potential Aisle 24 franchisees don’t need to be tech whizzes to excel at the job. “If you can use a smartphone, you can do Aisle 24,” says Thomas. But, just to make sure they’re comfortable with everything that’s required of them. Aisle 24’s training program walks new franchisees through everything from purchasing to troubleshooting issues with customers.

Thomas recommends that when you’re looking at a franchise opportunity, you ask every single question you can think of. “Even though you might think it sounds stupid to you in your head, just ask it because it’s going to be your time and your money [that you’re] investing.”

Then, once you have your franchise up and running, Thomas advises to “be open and listen to what your customers want, because they will be the ones that drive your success.”

The future is bright for the young franchise system. According to CEO and co-founder John Douang, “At present, we’re seeing a huge influx of people wanting to start their own businesses and are opting for new innovative services that are future-proof,” he describes. “As we grow and cement our position as a leader in technology-enabled convenience and grocery retail, our goals are to have a network of Aisle 24 Markets in every community in Canada and we’ve set our sights on U.S. and international markets.”

As for Thomas himself, he’s got a new 1,100 square foot location on the horizon in Toronto’s Canary District. This time, the franchise will be in a commercial unit at the bottom of a condo building, so it’ll be open to the general public. Despite a few COVID-19 related supply setbacks, the location is on track to open this summer and Thomas is excited to get to work.