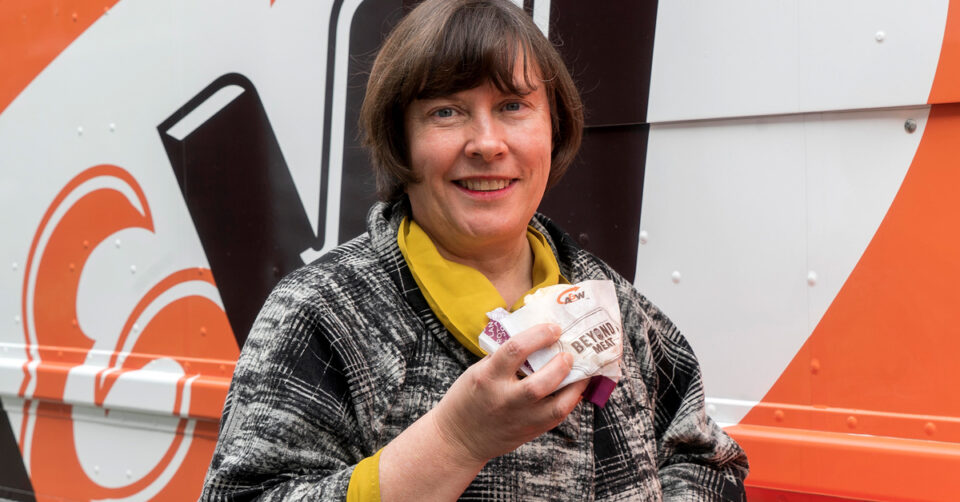 From Diner to Executive

Like most of her fellow baby boomers, Susan Senecal has fond memories of her parents packing her and her sisters into the car on hot summer nights for a trip to their local A&W. It was a real treat for young Senecal, and one that would prove somewhat prescient.

“My parents would take us to the A&W in Greenfield Park in Montreal. I remember the excitement of going out for a meal – it didn’t happen often in those days,” says Senecal, who went on to build her career at A&W Food Services of Canada and is now the company’s CEO, only the fifth in its long history. “That’s where I tasted my very first onion ring, and I’ve loved onion rings from that day on!”

Senecal isn’t alone. Baby boomers across the country have a real soft spot for the Canadian burger brand, which enjoys an almost iconic status among that demographic. “A&W started in 1956, so baby boomers and A&W were sort of born together,” she explains. “For many Canadians, A&W was their first fast food experience of any type, or their first burger. We had nearly 300 drive-ins at the peak of our operations, which made us one of the dominant brands in Canada at the time.”

A&W preceded the arrival of bigger U.S. burger brands in Canada. Most appealing, however, was that at one time it offered a unique drive-in dining experience, complete with uniformed carhops with jaunty little caps bringing meals out to your car. It wasn’t just about the food; it was a much-loved outing for young and old alike.

While the drive-ins were a phenomenal success, they were also a seasonal business – highly popular on balmy summer nights, less so on a chilly day in February. So, when quick service restaurant (QSR) brands started building sit-down restaurants, they gave the quintessential Canadian brand a run for its money. “The American competition started to move into the Canadian marketplace, and I like to joke that they had this huge innovation called central heating!” says Senecal with a laugh.

If it was to survive and prosper, A&W needed to reinvent itself, and it did just that, moving its locations into shopping malls, which were being built at a brisk pace in the mid-1970s. “That was the original transformation, shifting from a drive-in business and moving into shopping centres, because hundreds of shopping centres were being built in suburbs across the country,” says Senecal. “We were able to successfully make that change.”

The ‘we’ Senecal speaks of is figurative – she joined the company in 1992, after honing her skills at two other franchise brands in her hometown of Montreal. It was while working at Cultures as a training manager, followed by a stint with Croissant Plus as a training and area manager, that Senecal knew she wanted to build her career in the QSR industry.

While she had studied biology and computer science at university, she found herself craving the human interaction that a more business-oriented career would provide. “The moment I graduated, I realized my passion lay elsewhere (than biology) and the rest is history,” she says. “I love the speed of things [in QSR], how quickly you can change and influence things. It’s a great laboratory for learning, and you are surrounded and supported by great teams of people.”

When she heard of a real estate position opening up at A&W, Senecal applied. But she quickly rescinded her application after she learned it would require extensive travel. As a young mother at the time, Senecal didn’t want to be away from her family for extended periods. A year later, A&W contacted her about an area manager position, and this time she readily accepted.

Senecal has since worn many hats at the company, and this lateral movement, which A&W encouraged, put her in the thick of its ground-breaking push to attract more millennials to the brand. She was its chief marketing officer when it reinvented itself, yet again, this time as a burger joint with a conscience. “People today want to know what they’re eating, and they want to know more about their food,” she says. “We saw that trend emerging and we started asking ourselves what that means for A&W. For me, and for A&W, change has been very good!”

What it meant was building on the idea of “good” in “good food makes good food” – which Senecal says “includes our people, our guests, our partners, and our planet.” This approach led to the introduction of everything from organic Fairtrade coffee and grass-fed beef to root beer brewed with natural flavours and a ‘Beyond Meat’ vegan patty that tastes just like the real McCoy. The company also introduced compostable burger packaging and switched to metal baskets for its onion rings and ceramic plates and mugs for its breakfasts. It’s equally committed to eliminating plastic straws and was the first national chain to introduce paper straws instead.

Millennials took notice, as have other young customers impressed with the company’s growing green credentials. Most astounding is that the initiatives embraced by the company aren’t those normally associated with fast food restaurants serving competitively priced burgers and fries. “Those were the kinds of things that were surprising to the Canadian marketplace,” observes Senecal. “You tend to see them more at high-end restaurants, so it was a revelation, and for us it was exciting.”

The company has strived to bring millennials into the A&W fold in other ways as well. In 2016, it launched its Urban Franchise Program, an initiative aimed at attracting millennial franchisees by easing some of their roadblocks. For young franchisees accepted into the program, the initial equity contribution is substantially reduced (to around $125,000 to $150,000) and A&W invests in the construction of their restaurant (which it makes back in rent). There is also extended training – up to a year or more as paid interns at an existing location – so the new franchisees can learn all the ins and outs of running their own business.

The program has greatly incentivized the younger demographic – there were reportedly 200 applicants when it first launched in 2016. “This partnership has been really good,” says Senecal. “People who don’t have all the experience or money that’s needed to be a traditional franchisee get a chance to open their own business, and we get a great franchisee who is highly engaged and has a lot in common with our guests.”

Despite the challenges tied to the COVID-19 pandemic, the Urban Franchise Program remains strong, as does overall interest in the company from potential franchisees young and old. A&W is continuing to open new locations, which now total more than 1,000 across the country, and is on course to expand its business outside of its western stronghold, particularly in Ontario and Quebec. That’s not to say that the pandemic hasn’t brought its challenges. At its peak in 2020, more than 200 A&W locations, primarily in malls, had to close temporarily.

But Senecal, who cites COVID-19 as her hands-down biggest career challenge ever, remains unfazed. Always up for a challenge, she continues to thrive on change and innovation, and it’s this dedication to creativity that keeps steering A&W into new, uncharted territory.

That’s not about to stop, as Senecal hints at more novel, fresh ideas on the horizon. “We have a lineup of innovations coming out this summer that we think will bring a little bit of spark to people’s lives,” she says. “It’s a time when people are looking for some excitement, so keep on the lookout.”

No encouragement needed. Our eyes are peeled.

Day in the Life: No Cashiers? No Problem!

Next Generation in Franchising: Tried and True Real Estate