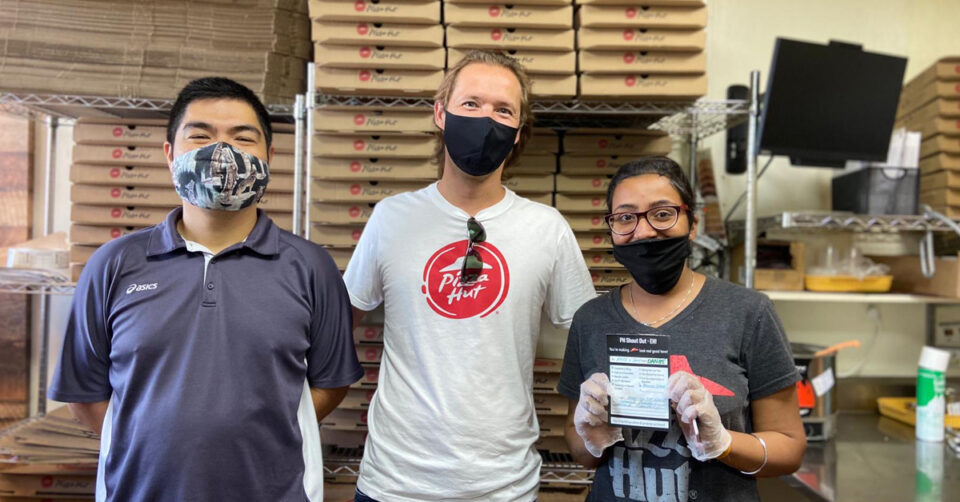 When contemplating ways to give back, sharing your own expertise with those who could see the most benefit is a logical approach. That’s the thinking behind Pizza Hut’s new national social purpose program, Equal Slice, which provides a 40-hour “mini-MBA,” one-on-one coaching, and access to capital to help small business owners get to the next level.

“We wanted to choose something true to the brand. Our business was founded many years ago by two brothers who had a dream and were able to make the business what it is today,” says Chelsea Hamlyn, chief people officer, Pizza Hut Canada.

Yet another goal was to increase business diversity, which is why Equal Slice focuses on minority, immigrant, Indigenous, and disabled-owned businesses. “This is an opportunity for us, given the platform we have, to provide opportunities for those who need it most,” says Hamlyn. To help connect with eligible businesses and develop a solid vision for the program, Pizza Hut partnered with Initiative for a Competitive Inner City, a non-profit that’s, “dedicated to transforming under-served areas of major urban centres.”

With 51 participants across Canada, the inaugural cohort includes businesses of all types, from an Indian grocery store in Thunder Bay to a doll maker in Toronto. “We wanted to make sure that it was open for everyone, so there are lot of really unique businesses,” explains Hamlyn. Rather than seeking out startups, the initiative is designed for businesses that have been in operation for a couple of years, and the brand has also built in a grants program offering $20,000 to five participants to support entrepreneurs, which they hope to include as part of their annual initiative.

Launched in fall 2021, the Pizza Hut Equal Slice program features a “mini-MBA” taught by professors from Harvard and other top universities. In addition to that 40-hour program, there are virtual capacity-building training sessions scheduled to allow participants in different time zones to attend. “Let’s say there’s a topic that you’re struggling with or specifically interested in, you can sign up through a platform to attend those sessions. You get to pick what makes the most sense for your business or what makes the most sense for your calendar,” says Hamlyn, noting that there’s also a year-end conference.

Besides accessing courses on topics of common interest to most entrepreneurs, Hamlyn points out that the opportunity to network with other business owners across the country is also invaluable. “I do think there’s going to be a lot of benefit to start to build those personal connections.”

While Equal Slice is Pizza Hut Canada’s first national giving initiative, franchisees have long been supporting their individual communities through local donations of food, time, and funds. Regular sponsorship of local sports teams, school programs, and other community initiatives has been the brand’s wheelhouse. “To be honest, franchisees do so much. And they don’t tell us everything, because [some] don’t want the recognition. They’re doing it for the right reasons, which is to help their community,” says Hamlyn, citing the pandemic as a recent example where franchisees reached out to their local hospitals, fire stations, and other essential services to give out free food to help support their efforts.

While Hamlyn says that hyperlocal focus has long been a source of pride, it makes it challenging to share those successes. “It’s been harder for us to showcase the work we do in that charitable space, because all our franchisees are doing different things. But we’re hoping that now that we have a national social purpose program, we’ll be able to do a better job of showcasing the work that our franchisees are doing and communicate that in a big way, from a brand perspective.”

Hamlyn adds that the franchise is content with ramping up the program slowly, as it’s more interested in getting it right than doing it fast. “I think it’s definitely going to evolve over time and continue to grow, but we’re trying to do that in a way that’s manageable, to build the credibility and the excitement,” says Hamlyn. “I’m quite excited to be able to take it to the next level.”

Franchise Fun: Out of This World Education