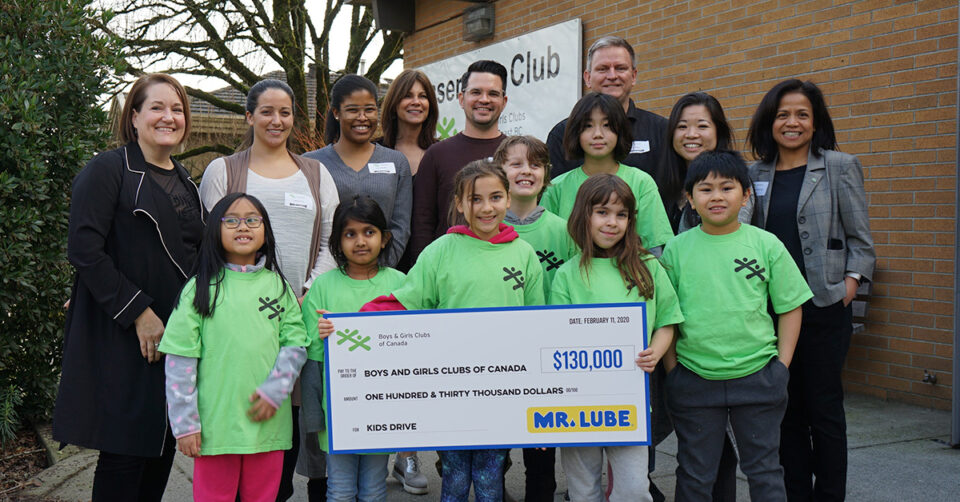 The Mr. Lube Foundation has supported communities for nearly two decades, raising more than $5 million for charities across Canada

Since 1976, Mr. Lube has been a Canadian leader in the automotive maintenance services industry, offering vehicle maintenance, oil changes, and more. As a respected brand name with 175 franchise units across the country, Mr. Lube has served more than 40 million customers and is trusted for top-to-bottom automotive care.

Beyond supporting customers and their vehicles daily, the Canadian brand has been dedicated to supporting communities through the Mr. Lube Foundation that was established in 2002. Since then, the foundation has raised more than $5 million for charities across Canada, with each franchise partner participating and inspiring their staff and communities to give back to local charity partners.

“We’ve been involved with charities for a very long time, and it’s been very important since the inception of the company,” says Stuart Suls, president and CEO. “It’s really a frontline [effort] where we have the employees of franchisees who are so engaged with the charities, and we work with them to set the direction of our Mr. Lube Foundation.”

Charities that Mr. Lube supports include BGC Canada (formerly known as Boys & Girls Clubs of Canada), Multiple Sclerosis (MS) Society of Canada, Covenant House, Centre for Addiction and Mental Health, and Canadian Red Cross. Suls explains that team members have had a lot of personal involvement with these causes, and the brand has been on the forefront with charities that support children’s welfare and multiple sclerosis. Each year, the second weekend in May is known as MS Weekend, during which $2 from each oil change at Mr. Lube franchises is donated to the MS Society of Canada. So far, more than $350,000 has been raised and donated to regional and national MS programs.

The brand also works with Canadian veterans’ charities, including the Royal Canadian Legion. In addition to raising funds, many locations provide free oil changes to all veterans on Remembrance Day to honour them for serving our country.

“We firmly believe that the more people we get involved—with thousands of employees—if we can get the engagement at the store level then that’s really where the bigger impact is. So, the franchisees are completely in lockstep with our charitable efforts,” says Suls.

He adds that head office also gives franchise partners the option of choosing their own local charities to donate to so that they can see first-hand the impact they’re making in their community. This is done by delivering 50 per cent of donations to the brand’s national partner, which right now is the BGC Canada. Then, franchisees are allowed to choose where the other 50 per cent of proceeds will go, selecting charitable organizations that are important to them. “So, there are probably hundreds of other local charities that we’re supporting [beyond our main charity partners],” notes Suls.

While raising funds is the financial side of the Mr. Lube Foundation, Suls says that the other side is the engagement between the franchise system and its local charities. “We support Camp Quality in Toronto and Zajak Ranch for Children in Vancouver. These are camps for children who are medically disadvantaged and can’t go to a normal camp for medical reasons. So, when we’re doing the work with these camps, we show up in person. There’s the actual engagement and hands-on aspect, where we’re not raising money, but we’re still involved.”

Looking towards the future, Suls says that the Mr. Lube Foundation is “absolutely going to continue down the path” of their chartable efforts, looking at new causes to support in addition to children’s welfare, MS, and Canadian veterans. “We don’t have any plans to change the groups we’re working with, but we’re absolutely going to continue and will always look at the groups to make sure they’re still meeting the values and goals that we believe in.”

For all its charitable efforts, Mr. Lube won the Canadian Franchise Association’s Outstanding Corporate Citizen Award as part of the 2021 Recognition Awards. “We’re very proud of this award, it means a lot,” says Suls. “That’s something we’re taking a lot of pride in, and are sharing with our suppliers and franchisees and their staff.”

“We’re part of the community as a business and we derive our revenue from the community,” adds Suls. “We see it as lockstep: we work for the community, and they work for us. Giving to the community is how we exist, so like any other company we feel it’s our responsibility to give back and partner up with communities.”

Franchise Fun: A Love for Learning

Giving Back: Stepping Up in Times of Crisis