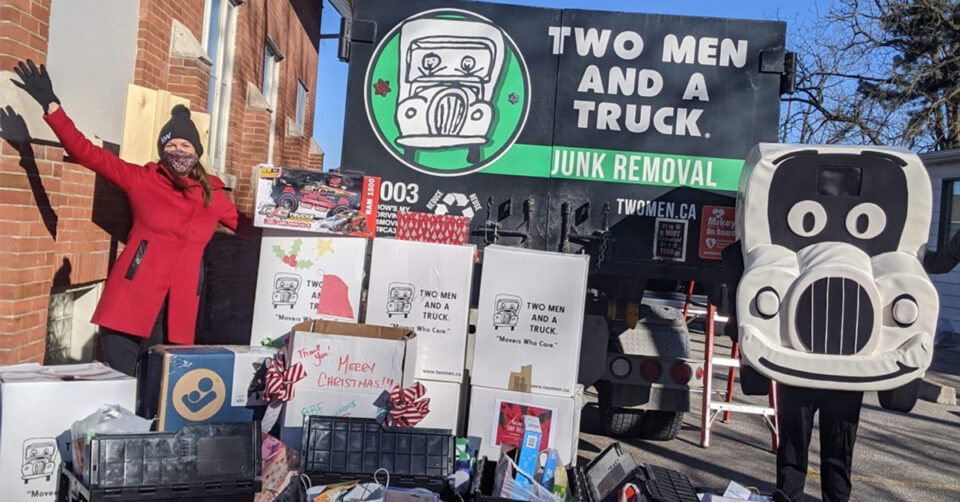 TWO MEN AND A TRUCK Canada operates with a core value of giving back to the community, from helping in Ukraine to here at home

“It’s a good feeling to give back,” says Chuck Resnick, vice president of marketing and operations at TWO MEN AND A TRUCK Canada.

As one of the most recognizable moving companies across Canada and the U.S., TWO MEN AND A TRUCK operates with the slogan, “Movers Who Care,” and it shows in all the brand’s charitable donations and involvement in new and ongoing organizations.

Most recently, it participated in supporting the country of Ukraine and the vast Ukrainian community throughout Canada. “We decided to donate $10 from each move in the month of March, up to a total of $10,000, to the Canadian Red Cross Ukraine humanitarian crisis appeal. We chose this because the Canadian government is matching up to $10 million in donations from Canadians,” explains Resnick. “The reality is, statistically, Canada is the home to the world’s second largest Ukrainian population, with a significant Ukrainian population in Winnipeg, and [TWO MEN IN A TRUCK is] represented there. A lot of our friends, neighbours, and employees have friends and family that are directly affected by [the crisis].”

The brand was quick to announce this contribution to the timely cause. But some may be surprised to learn about how plentiful and diverse the brand’s community contributions are. “We actually budget it, it’s right in [each franchisee’s] budgets, both charitable and non-charitable causes,” says Resnick.

That long list of causes includes 10 cents from every move going to the Mikey Network, as part of the Mikey On Board program, where every truck carries a Mikey defibrillator that all franchisees, drivers, and staff have been trained to use. “We’ve never had to use it, but it’s interesting for customers in particular who think it’s quite odd that there’s a defibrillator on a moving truck,” says Resnick.

Also throughout the year, “A lot of our franchisees on the lead up to Easter, Thanksgiving, and Christmas will do food drives for their local food bank. They call it Stuff a Truck.” During this time, franchisees partner with local grocery chains and park their truck in a store’s lot, encouraging customers to purchase and drop off goods at the truck to be delivered to a local food bank or wherever the need is greatest for donations.

Christmastime is another key period for giving back as Resnick points to a number of initiatives supported by franchisees across Ontario.

A multi-unit franchisee in Toronto participated in The Shoebox Project this past winter. This initiative collects toiletries, health and beauty items, and other useful gifts, and distributes the shoeboxes full of goods to women’s shelters in the community. “In the U.S., the similar program is called Movers for Moms, which donates to women’s shelters on Mother’s Day,” adds Resnick.

In the Niagara Falls and St. Catharines region, a franchisee “co-partnered with a local radio station on a program called Frontline Fridays,” he explains. “They donated and delivered lunch to frontline workers [during the pandemic] at a local hospital in St. Catharines, and because the request came in, they ended up donating six defibrillators to the local YMCA in the Niagara region.”

Plus, Resnick notes that one honourable franchisee in Ottawa with a focus on community giving participated with CTV and Toy Mountain in recent years, and joins The Ride to Conquer Cancer at their local hospital in the summertime. They like to have fun with it, too—Resnick says the franchisee renamed their operations manager the “Chief Elf Officer” during the month of December because “it’s important to have fun” while doing good for the larger community.

“The bonus you get is the fun for employees who get involved, too. They get a real sense of, ‘the person for whom I work is actually committed to giving back.’ That’s a good message to deliver to your staff.”

For the brand’s franchisees, they receive the recognition and honour for all the ways they give back. Resnick notes that franchisees in the Niagara and Etobicoke regions recently “won what was called a Newsmaker Award. We put them on a pedestal and gave them an award. Another is called the Humanitarian Award which Ottawa received given the amount of charitable giving they did in years past.”

TWO MEN AND A TRUCK Canada shows no sign of slowing down with new and emerging initiatives and donation programs. Charitable giving is part of the brand’s mission statement, with a core value focused on giving back to the community, says Resnick. “I don’t ask the question, ‘what do I get in return?’ it’s just the good thing to do. And that’s why charitable giving is so important.”