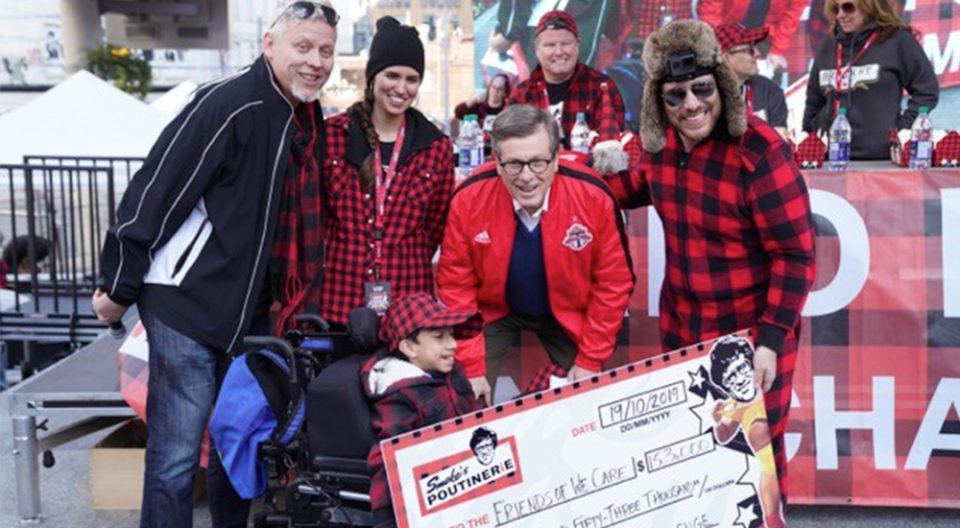 Growing from a table and a banner in 2009 to a global spectacle involving some of the world’s top competitive eaters and thousands of screaming fans, the annual Smoke’s Poutinerie World Poutine Eating Championship, known as WPEC, has come a long way.

Back in 2009 – in his first year of business, with only two Smoke’s Poutinerie locations up and running – founder and CEO, “chief entertainment officer,” Ryan Smolkin set up the humble first WPEC inside the gates of Toronto’s BMO Field.

Fast forward to 2019, when at the 10th Annual Smoke’s Poutinerie WPEC on October 19 at Yonge-Dundas Square in Toronto, Smoke’s Poutinerie presented a cheque for $153,000 to Friends of We Care, an organization dedicated to sending kids with disabilities to fully accessible camps throughout Canada. Additional funds were raised after the event, with a grand total of $157,000 raised for Friends of We Care.

What’s key about WPEC, according to Smolkin, is the message it sends to the franchise’s network of more than 150 locations across the world: through hard work and building relationships, it’s possible for a small idea to grow into big money for charitable initiatives involving big-time organizations like Major League Eating and 41 Canadian CEOs who took part in a CEO Charity Eat-Off. To date, WPEC has raised a total of over $403,000 through the CEO Charity Eat-Off.

“We own this event. We don’t sponsor it, we created it,” Smolkin says of WPEC. “We looked at the first event and thought, ‘where can we get the best eaters?’ That’s when we hooked up with Major League Eating to source the world’s top eaters and they were all over the idea. They wanted to down the fries, cheese curds, and gravy, and join us in entertaining our fans! So, it’s evolved from a simple table and banner at BMO Field to this year’s 10th annual WPEC, where we had eight of the top 10 eaters in the world on stage in front of 20,000 fans! Every penny goes to charity.”

WATCH: Ryan Smolkin of Smoke’s Poutinerie talks about the evolution of the WPEC with Franchise Canada TV

Through the event, Smolkin wants to influence his franchisees to stick to one of the franchise’s core values: giving back. In 2016, Smolkin built a relationship with Kevin Collins, the CEO of Friends of We Care at the time. At a fancy black-tie fundraising dinner, Collins challenged Smolkin to an eat-off at WPEC. Smolkin responded by challenging the CEOs from across Canada’s food and beverage industry in attendance.

Things snowballed from there, leading to the 2019 rendition of WPEC seeing more than 20,000 people flock to Yonge-Dundas Square for the event, including Toronto Mayor John Tory. For Smolkin, it’s all about the message the event’s success sends to his franchisees.

“They see the power of the brand and the scope of what they can do in their own communities. They might think ‘well, they can do this because they’re corporate,’ but no man, I was doing this when I was just two stores big,” Smolkin exclaims. “It all starts with an idea. It’s franchisees coming together to give back to their own local communities as one of our core values. That means giving back every way you can. It’s not just for PR. You’re giving back because you care.”

If the charitable initiatives launched independently by Smoke’s Poutinerie franchisees are any indication, the message has been received loud and clear. Smolkin points to some examples of “rock star” franchisees who give back to their local communities in their own way, perhaps inspired by WPEC.

In St. Catharines, Ontario, Smoke’s Poutinerie franchisees hosted a “Reverse Easter Egg Hunt,” where they asked the community to bring cartons of uncooked eggs in exchange for a free snack-size poutine, while Toronto’s Dundas Street location is heavily involved with Mount Sinai Hospital. Through the ChrisKwanKah holiday campaign, 26 locations participated in the Potatoes for the People program, collectively donating 12,400 pounds of potatoes to local food banks across the country. Smolkin hopes his new franchisees overseas in the Czech Republic, Hungary, Austria, and throughout the United Arab Emirates will also build off the success of WPEC and give back in their own way too.

At the corporate level, Smolkin is looking to take WPEC even further after the world’s No. 1 ranked professional eater Joey “Jaws” Chestnut reclaimed the championship by consuming 28 pounds of poutine at the 2019 event. By building up WPEC, Smolkin hopes to continue to show his franchisees what they’re capable of.

“What’s Important is the power that people have that they don’t know they have. We’re just a small player in this industry, but we show that as a smaller brand, we’re able to go out, work hard, and build these charitable causes to give back to the community. It shows what you can do if you put your nose to the grind.”