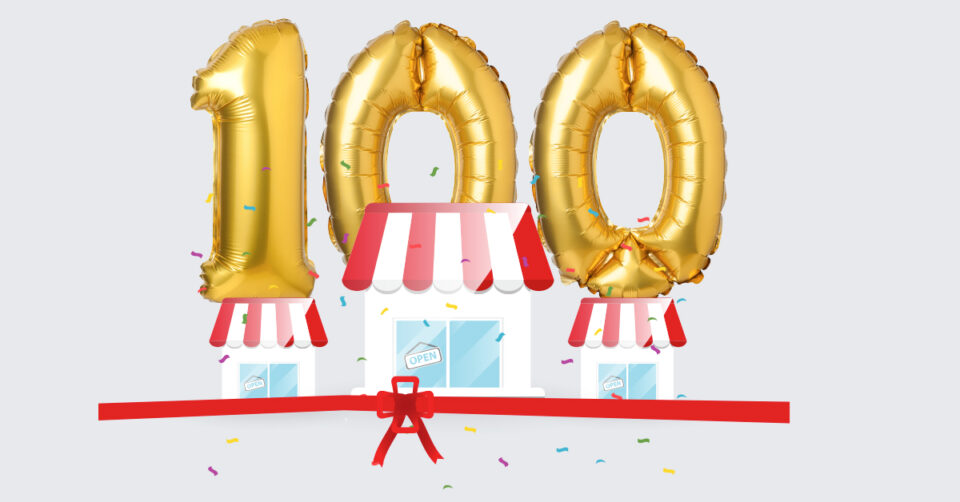 Many franchise brands never hit 100 locations, so when it does happen — especially during a pandemic — it’s something to celebrate. Here, you’ll meet three brands that recently achieved that milestone who share how they did it and what’s next for their franchises.

Fraser Clarke acquired the Massage Addict franchise on August 1, 2014, and from day one, the goal was to hit 100 Canadian locations. It was a bold objective, given that there were just under 20 locations when he took over. But, on October 21st, they did exactly that and opened the 100th location in St. John’s, Newfoundland.

“It’s obviously been a crazy year, so I’m just extremely proud of my head office team and all of the franchise owners across the country,” says Clarke. “It certainly wouldn’t have been possible without having a group of very committed and positive franchise owners who execute the business model on a daily basis.”

It also might not have been possible if the franchise hadn’t spent the past several years surveying and trying to better understand its clients, adds Clarke. That research made it clear that instead of positioning itself as a day spa, Massage Addict needed to position itself in a more clinical light, where it was helping its clients resolve specific symptoms and conditions, such as pain and stress. As a result, the company added reflexology to its suite of treatments in 2018, acupuncture in 2019, and chiropractic care in September.

Kurtis MacDonald became the franchisee of two Edmonton locations in 2019 and five more in Ottawa in 2020. It was a “pretty scary” time to be a new business owner, he admits, especially during the first lockdown, but government relief and the support of the franchise was huge. He points to Massage Addict’s western Canada franchise business consultant, Trish MacDonald [no familial relation], in particular.

“She has probably been my therapist through this, and non-pandemic as well,” says MacDonald. “She’s there to help with day-to-day operations and other issues, but honestly I think the franchise’s superpower is just listening to us while we vent our thoughts and whatnot.”

When that first lockdown was lifted, MacDonald says his locations were busier than before the pandemic. The same was true in general across the network, says Clarke. November, in fact, was a record month.

Now the franchise is eyeing even faster growth. It recently identified about 50 Canadian regions for expansion — mainly in B.C., Alberta, and Quebec, though across the country as well — and it has about 20 franchise partners who are currently under agreement to expand. The franchise is also aiming to open its first U.S. location by early 2022.

Clarke says Massage Addict has seen much higher demand from prospective franchisees in recent months compared to pre-pandemic. “It validates our business model and the positive benefits we have with clients managing their pain, stress, and anxiety, so we’re going to continue to grow.”

While few franchises have emerged unscathed from the pandemic, some have actually thrived. One of them is the small-quantity metal supplier Metal Supermarkets, which opened its 100th location in San Diego, California in early October. That same month, the franchise hit a network sales record.

Stephen Schober, president and CEO, says there are multiple reasons for that success, including a solid manufacturing sector and an increase in home projects. But a dedicated franchisee network might be the most significant. “If we were a corporate chain, we wouldn’t be doing this well, because there isn’t the same passion and dedication,” he says. “Our franchisees didn’t close down. They stuck with it even though they’ve dealt with a lot of anxiety and employee issues. They are the heroes.”

Bill Mair opened the first Metal Supermarkets in Mississauga, Ontario in 1985 and began franchising in the Toronto area in 1987 before moving through western Canada. The company opened its first franchise in the U.K. in 1994 and in the U.S. in 1996.

Mark Hoenen and Adam MacDonald became franchisees of the Victoria, B.C. location in 1996 and the Nanaimo, B.C. location in 2003. Hoenen says 2020 has been one of their best years for sales. “Because people can’t travel, there’s a lot more people doing home projects, restoring cars, things like that, and then there’s our contractor business too. And that’s the nice thing about this business — you’re not limited to one group. There are so many avenues to sell to.”

It’s also a fun job, adds Hoenen. “Every day it just boggles my mind what people make with metal. One fella recently built an elevator in his house for his wife. He couldn’t find anything off the street, and he came in and started buying material from us.”

As for future milestones, the company is focused on continued expansion in the U.S., but is exploring a smaller market model in Canada. A typical Metal Supermarkets location needs a market with at least 300,000 people, but a store with a smaller footprint and different inventory could work in an area with fewer than 200,000 people, says Schober. “We don’t have a whole lot of markets left in Canada, but this way we think we can build a bigger market presence.”

If it was a normal year, the mayor might have been there, along with local press and proud friends and family members. But when Osmow’s opened the doors to its 100th restaurant in Pickering, Ontario in October, it was a day almost like any at the 99 other locations of this fast-casual Mediterranean chain: wafts of shawarma, falafel, and garlic sauce coming from the back; busy staff taking orders out front; masked customers taking their Tabouleh, beef kofta wraps, and Philly cheese steak platters to go.

“We would have loved to make a big day over this very big milestone, but with all the COVID measures, we just couldn’t,” says Ben Osmow, CEO and head of franchise operations. So, instead they gave themselves “a pat on the back and kept trucking along.”

Racing might be a better metaphor. Osmow’s dad, Sam, started the company in 2001 in Mississauga after converting his sandwich shop to Mediterranean cuisine, which were flavours the Egyptian émigré knew well. After selling a few initial locations to family and friends, franchising accelerated in 2015. Over the past three years alone, the number of locations has more than doubled, with 19 added in 2018 and 35 more in 2019. Most are in southern Ontario, though expansion is happening in British Columbia, Alberta, and Saskatchewan.

Osmow believes one of the main reasons for the franchise’s rapid growth has been its ability to rethink Mediterranean cuisine. “We don’t claim to be authentic, we’re not. Our top-selling menu items are Chicken on the Rocks™ and Shawarma Poutine. So, we’ve done a really good job with the educational piece — teaching consumers how we’ve been able to modernize our cuisine so that it’s open to all Canadians.”

The food was the major motivation for Tarak Dave and Nick Pandya to become Toronto franchisees in 2019. The marketing was another, they say, pointing to the TV ads with two Toronto Raptors players during the 2019 NBA championship run as the perfect example. “That just blew up the brand to another level, and it helped us a lot,” says Dave. “We have two locations now, but we’re still looking to open more.”

Fortunately, they may get that opportunity.

“Our goal is to be the largest Mediterranean QSR in North America,” says Osmow. “And we’re well on track to getting there.”

The First Year: All Decked Out

A Day in the Life: Putting Pets First