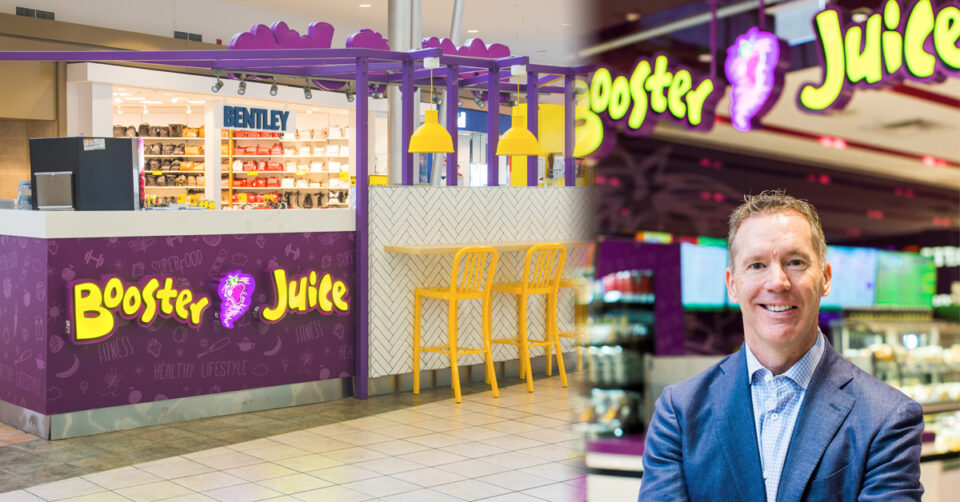 Booster Juice has made a splash in the healthy food market, serving juices and smoothies to guests for more than two decades

As Canada’s original juice and smoothie bar, Booster Juice was founded by Dale Wishewan back in 1999. He had a lifelong passion for sports and fitness and had been creating his own protein concoctions for years. Although he went to school south of the border (on a baseball scholarship), earning his BSc in mechanical engineering from Portland State University, it wasn’t until years later that he noticed the American popularity of juice and smoothie bars during his travels across the U.S.

The first Booster Juice location opened in Sherwood Park, Alberta, offering a healthy fast-food alternative for active people who were concerned about their health and wellbeing. Even Wishewan couldn’t have predicted how popular Booster Juice would prove to be!

“I had no food service background, and no pre-conceived notions about how the business should be run,” says Wishewan, who’s still Booster Juice’s president and CEO. What he did have was a belief that there was a gap in the Canadian QSR market that Booster Juice could fill. He had the goal of bringing fresh and healthy food to the masses, and project management skills to grow the business. By the end of year one, there were 15 locations, and by the end of year two, there were 50. Today you can find Booster Juice in every province and territory, with 410 stores across Canada.

Jacques Lamontagne became a franchise owner in the brand’s third year, opening a store in the Orleans area of Ottawa in November 2002. Lamontagne had owned a sporting goods franchise in Northern Ontario for 10 years before moving to Ottawa, and says, “I’ve always been active and very careful with what I eat, and when I saw that Booster Juice was looking for a franchise partner in Orleans, the opportunity got me really excited.”

That’s typical of a new franchisee with the brand, which attracts partners who are passionate and have an existing knowledge base about healthy eating and wellness—and likely have been a Booster Juice customer themselves. Franchisees should also have a commitment to building relationships through personalized interactions, be community minded, and want to be a hands-on business owner. “We don’t grow for the sake of growing,” says Wishewan. “We don’t compromise on the quality of our franchise partners—or on the quality of our real estate. Part of why we’ve done so well is because of the variation of store types—some store fronts, some in office towers or malls—and being open to change in our stores to accommodate eating habits.”

Wishewan says he believes that 650 stores will be the saturation point for Booster Juice in Canada, and predicts that half of the new locations will be in Ontario, with the other half spread throughout Canada.

The majority of Booster Juice stores are in power centres and strip malls, which proved to be extremely beneficial during the COVID-19 pandemic, since it allowed easy curbside pick-up and access for third party delivery partners. Wishewan says that typical Booster Juice customers are active, on-the-go people, and 90 per cent of sales were grab-and-go even before the pandemic, so not having an open seating area didn’t have a huge impact on sales. “These are people who want to get on with their day,” he says. To cater to their needs in a healthy manner, the franchise had already introduced a food menu to compliment the juice and smoothie menu.

Still, like many Canadian employers, Lamontagne experienced multiple challenges when the pandemic hit, from staffing to preparing orders, and then getting them into customers’ hands. “The first few months—mid-March to the end of April 2020—I did most of the days myself except on weekends. It was very difficult to drive customers in, so we had to go to them. We got help from third party delivery apps to be able to survive and get some sales going. Then our Booster Juice app [launched], and that helped a lot too.”

The Booster Juice app is here to stay, which has made serving customers quicker and easier in some ways. “People pre-order and pay through the app, so there’s no waiting in line,” says Lamontagne. “My sales are up 19 per cent over what they were in 2019. We’ve noticed an increase in food sales. It used to be four to five per cent of sales, now it’s closer to 15 per cent.”

On the other hand, Lamontagne doesn’t get to see customers and chat with them, so he doesn’t know his regulars the way he used to, and he says he misses that. “What I do enjoy the most is talking to my customers, [getting to know] them and what they want. For 20 years, I’ve been working in this store, and I know my regular customers very well. During the pandemic, people got used to ordering home delivery and many continue to do that. Now I can see deliveries going to the same addresses regularly, but I never see some customers.”

Wishewan sees how the shortage of workers has impacted the entire QSR sector, but says, “We’re in a good spot, though. We provide a fresh environment, no fryers or 4 a.m. start times, so in some ways, it’s easier for us to attract staff.”

Booster Juice supports its franchise partners with field operations staff, among other things. There’s online training for new hires and a support team that can respond quickly to help with any challenges that arise. Each new franchise partner goes through a 14-day initial training program, a combination of in-class and in-store, to learn all of Booster Juice’s well-defined processes and procedures. Franchisees also get ongoing support from the Edmonton head office or the regional office in Toronto, which offers assistance to the eastern market. The company provides marketing and promotional supports, and coaching to tap into multiple revenue streams, including non-traditional satellites, catering, and school programs.

Back in 2002, Lamontagne found that not many people were familiar with smoothies and their health benefits, so he was educating customers as much as promoting his own business. Now smoothies are a mainstream product, and Booster Juice is a well-recognized brand. Even so, to build a Booster Juice business, he says, “You have to put in the time and effort. It’ll pay off—but it’s not done overnight.”

Wishewan adds this advice to potential franchisees: “Pick a business you enjoy. Each franchise system knows its own business well and has a way of doing things. Adhere to that, be hands on. The business isn’t going to run itself. Do your due diligence, ask questions and choose something that’s the right fit.”