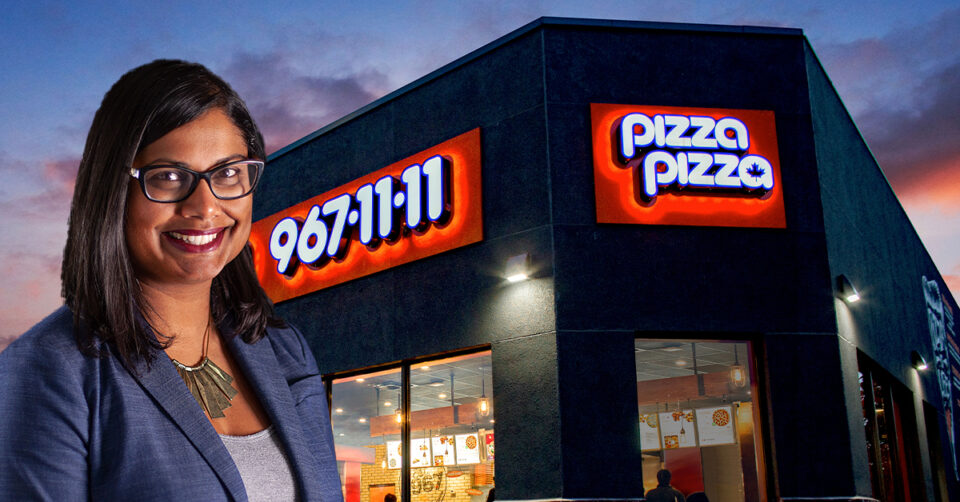 Christine D’Sylva was always a whizz at numbers, so zeroing in on a career in accounting was not exactly a leap of faith. It also came as no surprise when KPMG, one of the ‘Big Four’ accounting firms, signed her on straight out of university. But it was D’Sylva’s desire to look beyond the numbers that set her up for a less predictable future: a high-level career as a C-suite executive at a major Canadian pizza chain.

“I admit I love numbers, and that’s why I entered accounting. But why I stayed in accounting is because it opened the door to business,” says D’Sylva, who in January 2021 became chief financial officer of Pizza Pizza Limited. “Those numbers gave me a really solid grasp of business. It’s about looking at all aspects of a business to see where it is profitable and how you can make it a success. And I love that.”

Prior to joining Pizza Pizza, D’Sylva had been employed by KPMG for three years, joining the firm shortly after she graduated from the University of Waterloo with a Master’s degree in accounting. She had also held co-op placements at KPMG while completing her studies. “I was young and I was eager,” says D’Sylva. “I worked on accounts ranging from real estate to technology and I was also involved in recruiting and training, so it added a lot of pieces to my career.”

Pizza Pizza, however, presented D’Sylva a unique opportunity to help build and grow a business in a hands-on manner. That challenge and the opportunities it presented appealed to her. As well, the iconic fast-food brand resonated with her on a personal level. Growing up in an immigrant family—her parents originally hailed from India—D’Sylva remembers ordering pizza in what became a much-loved weekend ritual. “Every Friday night when I was growing up we had pizza for dinner—it was a treat,” she recalls. “My mom and dad worked all week and pizza was part of the weekend celebration. We’d all sit down as a family to enjoy it.”

D’Sylva joined Pizza Pizza in 2007, not long after the company’s IPO in 2005, as it began to require more financial oversight and improved public reporting. Brought on board as an assistant controller, she was given some significant responsibilities early in her tenure. Just six months into her new job, she conducted due diligence on the company’s strategic acquisition of the Pizza 73 brand in Alberta.

D’Sylva was also heavily involved in the overhaul and conversion of the company’s accounting system. Her hard work ethic, skill, and talent did not go unnoticed, and she steadily rose through the ranks. She was promoted to director of finance and investor relations, a position she held for nine years, then VP of finance and investor relations, and finally, the coveted position of CFO.

Her career climb is all the more impressive considering that at one point, D’Sylva was the only female director employed by the company. “Five years ago, when I went on a retreat to San Diego for the company’s directors, I was the only female next to 23 males!” She adds that much has changed since then. “What’s changed in the last five years has been incredible. It’s Pizza Pizza 2.0 right now. We have at least six female directors and I’m on the executive team. I’ve grown in this company and now I have a seat at the executive table, and that’s very exciting.”

D’Sylva says she’s always felt valued, supported and encouraged by an executive team that prioritized an environment of mutual respect. This accounts for the large number of dedicated, long-time Pizza Pizza employees, she adds. “In my department there are people who have been working here for 20 years, and the previous CFO had been here for more than 25 years. We have a lot of longstanding employees, and I think it’s because we respect our employees and support each other. That’s my biggest career lesson: treat people with respect, value them, and appreciate them for what they are doing, and your business will be successful.”

D’Sylva also credits the company’s rapid adoption of up-and-coming food service trends for its success. “We’ve always stayed on the cutting edge of technology and food innovation,” she notes. “We were the first adopters of a centralized single-number call centre, for example, and we won a Webby Award for our pizza ordering app in 2011. There are some companies that only created their apps when COVID hit, whereas we’ve always been pushing the envelope.”

Pizza Pizza’s success has indeed been phenomenal, with the brand reaching an iconic status in its home country. Today it has more than 625 stores—plus 100 Pizza 73 locations—in Canada. In addition to its traditional franchised locations, the company has non-traditional locations spread across sports venues theme parks, colleges, and universities.

At one point, just about every Canadian could recite the Pizza Pizza phone number thanks to a jaw-droppingly successful jingle that that aired regularly on many media channels. “There was a joke in the ’80s and ’90s that Canadian customs officers would ask people to recite the Pizza Pizza phone number to confirm they were Canadian,” laughs D’Sylva. “The brand connected with people, and as a result it developed a longstanding valued relationship with Canadians.”

Pizza Pizza franchisees come from a varied mix of backgrounds and reflect the diversity of Canada. Franchisees undergo an intensive six-to-eight-week training program that includes instruction at the Pizza Pizza Innovation and Learning Centre as well as onsite coaching at a franchise location, followed by ongoing recertification and e-learning. Creating a dedicated team of franchisees is critical, as is developing a strong support team at the head office.

That tight bond with franchisees and customers helped Pizza Pizza withstand the brutal economic hit delivered by the pandemic. It was able to hit the ground running with home delivery and pick-up, which historically accounted for 60 per cent of its business in traditional franchised locations. While it lost much of its walk-in business, things are now bouncing back. Same store sales are up 13 per cent in the first quarter of 2022, compared to the same period last year, says D’Sylva, and business is starting to pick up at its non-traditional locations too as COVID-related restrictions ease up and venues re-open.

The company also continued to expand throughout the pandemic, opening new restaurants in B.C. and Quebec, where it has a smaller footprint. “We now have over 20 restaurants in B.C., where we started with around five at the beginning of the pandemic, and we have almost 60 restaurants in Quebec,” says D’Sylva. “Those are areas of focus for us in terms of our national expansion program. Overall, our goal is to grow our traditional store network by five per cent every year.” The company is also embarking on its first global foray, into Mexico, and will open a restaurant in Guadalajara later this year.

D’Sylva says her own professional success is only as great of the success of those around her, and it’s this attitude that she credits for her career achievements. “I’m not your typical accountant,” she says. “Yes, I love numbers. But I also love talking and interacting with people, and that’s what I love about my current role and what I get to do. It’s about the business, the strategy, figuring out why things are happening and about working with people and helping them succeed. I’m successful if the people around me are successful.”